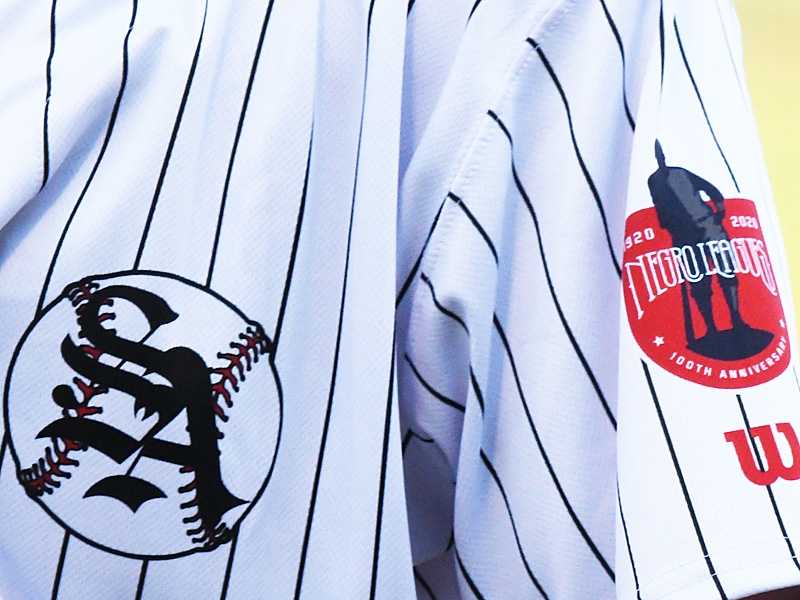 Jerseys worn by the San Antonio Missions on Saturday harkened back to the early 20th century, when baseball was segregated and Biz Mackey played minor league ball for the San Antonio Black Aces. Mackey went on to become a big-time star player in Indianapolis and Philadelphia, and as a player-manager in Newark, in the Negro Leagues. – Photo by Joe Alexander

The oldest professional sport in San Antonio, the one with perhaps the deepest roots in the culture of the city, hit a home run on Saturday night in tying the past to the present.

On a day of celebration for the recently-declared national holiday of Juneteenth, the Missions baseball club commemorated the Negro Leagues and honored a black ball player with local ties whose magnificent career went all but unnoticed for decades. 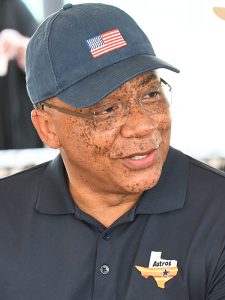 Houston resident Ray Mackey III talks about the career of his great uncle, Biz Mackey, who was inducted in 2006 into the National Baseball Hall of Fame. – Photo by Joe Alexander

The Missions brought the family of the late James Raleigh “Biz” Mackey to Wolff Stadium so that they, and others connected to black baseball in the Alamo City, could get together and enjoy a ball game and a fireworks display.

It was a good feeling for Ray Mackey III and his two sons.

“This is really pretty extraordinary for me,” said Mackey III, the Hall of Fame catcher’s great nephew. “One of the things I share with my sons is that when you strive for excellence, it may not be rewarded right away. In Biz’s case, even during his lifetime.

“But excellence has a way of ultimately prevailing and sort of rising to the top. Like cream, it will rise to the top.”

Mackey was born in 1897 in Eagle Pass and grew up hoeing rows of cotton on a farm near Luling.

After playing a half-dozen years in semi-pro and minor-league circuits in Texas, including at least two with the San Antonio Black Aces, he joined the Indianapolis ABCs in 1920 in what was considered the first official season of the Negro Leagues.

His career spanned the so-called Roaring 20s, the Great Depression and World War II before it ended in 1947. Known for his defensive prowess and strong arm as a catcher, Mackey also played shortstop and pitched. He hit .327 for his career, according to a statistics page in “Biz Mackey, a Giant Behind the Plate,” by author Rich Westcott.

In nine of those years, Mackey also managed, leading the Newark Eagles to a 1946 Colored World Series championship against the Kansas City Monarchs.

Mackey III, a Houston-based church pastor, attended ceremonies in Cooperstown in 2006 when his great uncle was inducted into the Baseball Hall of Fame. But coming back to San Antonio felt different.

“This means so much because this is where my family’s roots are,” he said. “You know, we’re from the Luling area. In fact, we just left Luling (where we were) eating barbeque near Prairie Lea, Lockhart, all around that area. So, that’s home to us.

“A lot of Mackeys moved to San Antonio, sort of migrated from Luling, for job opportunities and things.

“More importantly, the San Antonio Black Aces were (where he got) his start. So this is the foundation. This is where everything began for him. So, to look back in retrospect is just really meaningful. It’s really exciting. For him to have this honor, it’s just, it’s really heartfelt.”

The celebration had been in the planning stages for nearly a year and a half.

Last spring, Missions assistant general manager Bill Gerlt took on the project, trying to organize a day to honor the Negro Leagues’ centennial (1920-2020) in a meaningful way for South Texas.

Originally, he wanted to hold the event on June 20, 2020, but the minor league season was canceled because of the pandemic. Still, Gerlt persisted, arranging for the jerseys to be made with a San Antonio Black Aces logo on the front and a Negro Leagues centennial logo on one sleeve.

The logo, incidentally, is an image of Biz Mackey. 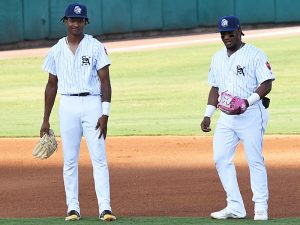 Missions’ shortstop CJ Abrams (left) and second baseman Eguy Rosario confer during Saturday night’s game against the Northwest Arkansas Naturals. The Missions rallied with three runs in the seventh for a 6-5 victory. – Photo by Joe Alexander

Jerseys were to be auctioned off with proceeds going to the Texas Kidney Foundation.

“We were going to do this last year to celebrate the 100th anniversary but had to cancel it because of the Covid thing,” Gerlt said. “But, anyway, the timing worked out with Juneteenth becoming a national holiday. So, we’ve had a year and half of planning for this one event.”

Bob Kendrick, president of the Negro Leagues Baseball Museum in Kansas City, Mo., said in an interview last year that Mackey’s likeness was chosen for the centennial logo because of his reputation as a dignified leader in the game.

“And, again, as we were trying to convey what we wanted this centennial to reflect, and how important the Negro Leagues were, I think the entire dignified persona (was) something that we wanted.”