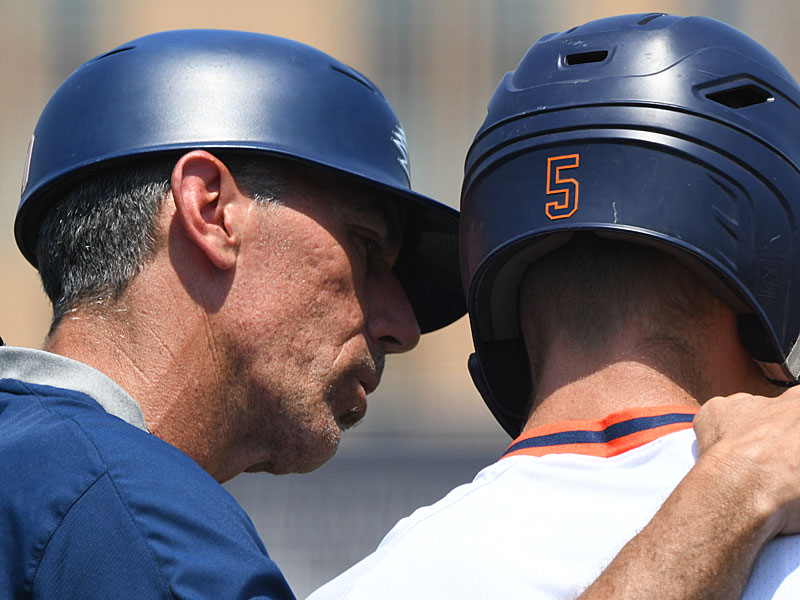 Coach Pat Hallmark and his UTSA Roadrunners play on the road tonight against the Southern Miss Golden Eagles. It’s the opener of a three-game series with Conference USA title implications. – Photo by Joe Alexander

The UTSA Roadrunners played three hours last Saturday afternoon in near 100-degree heat. After going home to hydrate and rest, they showed up on Sunday morning confronted with the prospect of competing again in an atmosphere that felt sort of like what you’d expect from a Central American rain forest.

By the time the game at Roadrunner Field started at 11:30 a.m., most of the few fans that turned out for the series finale against Marshall huddled under umbrellas to ward off the sun. Some of the people working the game hid out in areas shaded by the grandstands, hoping for a breeze that never really materialized.

Some of the Roadrunners, who were on their 25th game in 41 days, were not mentally into it in the early innings. UTSA coach Pat Hallmark said a couple of players who hit balls that were barely foul, who should have been running on contact, instead lingered in the batters’ box. The coach barked at them to, in not so many words, wake up and play.

After eight innings, the Roadrunners still seemed to be in a bit of a fog, trailing 4-3 against the ninth-place team in Conference USA. But just about that time, something clicked. Sensing that they were letting a prime opportunity slip away, they rallied, pushing across two runs to win, 5-4.

After the players had celebrated another comeback victory, Hallmark was asked how much he has enjoyed working with this group of players. He paused. His voice cracked just a bit. He related the story about how he had to get on them. And then he admitted something that he has felt all along, but hasn’t articulated to this point.

Today, the Roadrunners will take a 19-6 record in their last 25 games on the road for a showdown against the 11th-ranked Southern Miss Golden Eagles. The two teams will play the opener of a three-game series tonight at Pete Taylor Park in Hattiesburg. Southern Miss is in first place in Conference USA. UTSA is in second, two games back.

Oddly, neither team battling for the C-USA regular season title is at the top of its game right now. Southern Miss has lost five of its last eight. UTSA has dropped three of its last five.

In the Roadrunners’ case, I’m guessing that part of their malaise has had something to do with fatigue. The grind of playing so many games. Twenty five games in 41 days? In nine different ball parks? Is it any wonder, considering the occasional contest played in sauna-like conditions, that the team is hitting .206 during the slide?

After Shane Sirdashney’s game-winning hit lifted the Roadrunners last Sunday, the team took Monday and Tuesday off. They went through a workout at home on Wednesday and traveled on Thursday. Tonight, they’ll face the ultimate test.

The Golden Eagles, with championship dreams of their own, will be waiting for them.

“I hope we take this momentum (all the way),” Sirdashney said last Sunday afternoon. “I know everyone’s finishing finals this week. We’re going to be all focused on baseball after finals, and then when we go to Southern Miss, we’re going to be ready to play.”

UTSA has lost three of its last five games overall, and the Roadrunners are hitting only .206 in that stretch. Southern Miss has dropped five of its last eight. In its last two C-USA series, the Eagles have dropped two of three both at UAB and at home against Old Dominion.