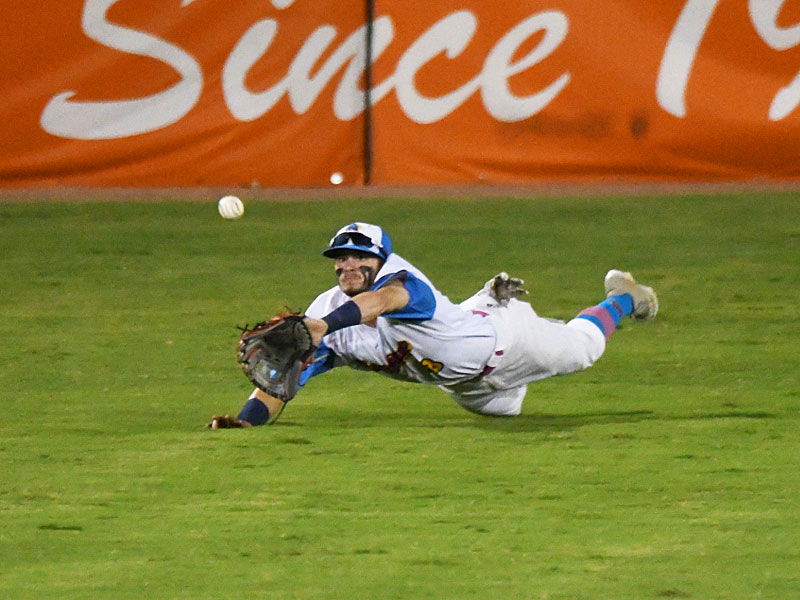 Flying Chanclas center fielder Jordan Thompson makes a diving catch on a line drive in the top of the ninth inning against the Amarillo Sod Squad on Tuesday at Wolff Stadium. – Photo by Joe Alexander

The Amarillo Sod Squad continued their push for a North Division title in the Texas Collegiate League, registering a 1-0 victory Tuesday night at Wolff Stadium against the fading Flying Chanclas de San Antonio.

Jose Torres drove in the winning run for the visitors in the seventh inning with a single off Johnny Panatex, which scored Mike Rosario from third. Rosario had reached on a double and moved up on a wild pitch. 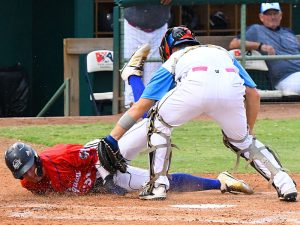 Flying Chanclas catcher Tyler LaRue makes a tag for an out at the plate to complete a triple play in the fourth inning. – Photo by Joe Alexander

Sod Squad starting pitcher Hunter Viets pitched six scoreless innings, and then three relievers out of the bullpen close the door. As a result, Amarillo won its second straight and improved to 5-2 over its last seven.

In the South, the Brazos Valley Bombers (15-10) remained in first place but the Round Rock Hairy Men (14-11) moved into second. The Hairy Men, playing at home, pounded out an 11-6 victory over the Bombers.

It was a significant development in that the victory bumped the Chanclas (13-11) into third place in the South standings with five games to go. Only the top two teams in each division qualify for the TCL playoffs.

If the Chanclas don’t start scoring runs, they won’t make the postseason. Their decline in offensive production has been stunning, as they have lost two of their last three via shutout and have scored runs in only two of their last 36 innings.

Playing at Brazos Valley last weekend, the Chanclas were held to five runs on 14 hits. Their batting average against the Bombers was a cool .147. The Chanclas improved on that a little on Tuesday with eight hits. But they left eight on base, including six in scoring position.

In the ninth inning, they had a chance to win when they loaded the bases with two out. But Amarillo reliever Everett Hurst, the second pitcher of the inning, struck out Johnny Hernandez swinging to end the game.

It was the fourth loss by shutout this season for the Chanclas, and their first at home. 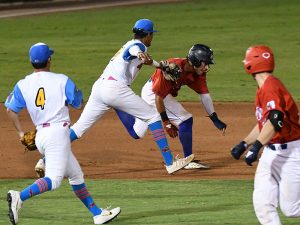 Flying Chanclas shortstop Jalen Battles tags out a runner in a rundown against Amarillo. – Photo by Joe Alexander

The Missions started a triple play in the fourth inning when Johnny Hernandez fielded a ground ball and threw to shortstop Jalen Battles at second base for a force. Battles fired to first baseman Ryan Flores for the double play. Running from second base on the play, Julio Mercano tried to score. But Flores fired to Tyler LaRue, who tagged Mercano sliding head first at the plate …

Amarillo’s Jose Torres, from Calvert Hall High School in Baltimore and North Carolina State University, ranks second in the league with 23 RBI. In 2019, Torres was drafted out of Calvert Hall in the 24th round of the major league draft by the Milwaukee Brewers.