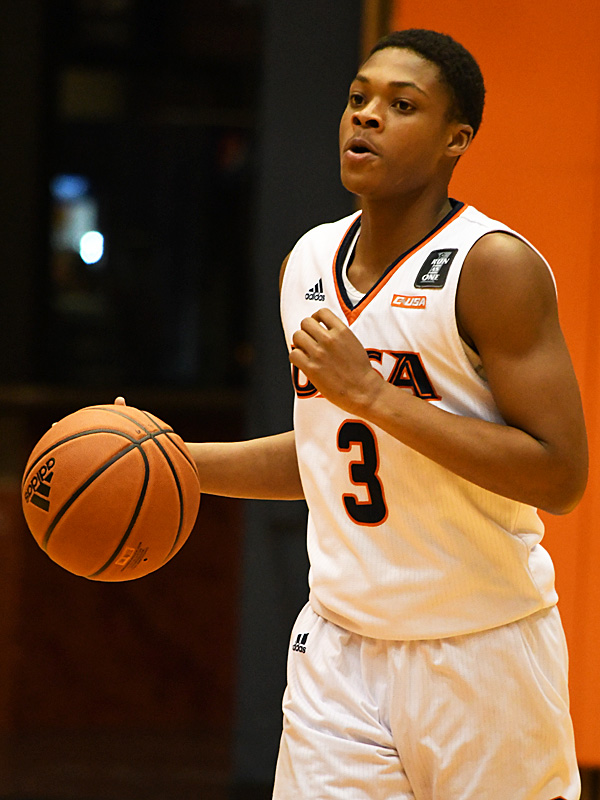 Jordan Ivy-Curry finished the regular season fourth on the team in scoring at 7.1 points per game. — Photo by Joe Alexander

As a result, Ivy-Curry started to flourish as an all-around player in his first year with the Roadrunners, and on Monday, he joined seniors Jhivvan Jackson and Keaton Wallace in winning honors announced by Conference USA.

The Roadrunners, one of the hottest teams in the conference, were scheduled to practice in San Antonio for the last time Monday afternoon before boarding a bus bound for Frisco. They’ll work out again Tuesday in Frisco as the tournament opens at The Star with preliminary round games.

On Wednesday afternoon, they Roadrunners will play the Charlotte 49ers in a second-round game.

In the first third of a 24-game season, Ivy-Curry had yet to live up to his reputation as a high-octane scorer. As a high school senior, he averaged more than 30 points a game at La Marque. But with the Roadrunners, his shot would not fall — at least, not initially.

In his first eight games, Ivy-Curry was playing off the bench and shooting a meager 32.6 from the field. From three-point range, he was way off the mark — 0-for-13. All that started to change on Jan. 2. ‘Juice’ hit a three out of the corner and finished 5 of 14 overall in a road loss at Rice. Coaches stayed with him, and he kept getting better.

For the season, he played in all 24 games, averaging 7.1 points and 2.8 rebounds in 19.7 minutes. He was also good in terms of moving the ball on offense and in defending the perimeter. Down the stretch, his three-point shooting touch returned. In his last 16 games, he hit 22 of 45 from distance for 48.9 percent.

UTSA coach Steve Henson said in a zoom conference with reporters that junior forward Adrian Rodriguez has practiced well. “In another 2 or 3 days, hopefully he’ll be close to 100 percent,” the coach said.

Rodriguez hurt his knee on Feb. 6 in at Florida International and sat out the next three games. On Feb. 27, he played two minutes at home against the UAB Blazers. Last Thursday, Henson played him 16 minutes in UTSA’s tune-up against Southwestern Adventist. Rodriguez had 12 points and seven rebounds.

For the Roadrunners to claim the C-USA’s automatic bid to the NCAA tournament, they will need to win four games in four days in the pressure cooker of a single-elimination event.

UTSA has never executed such a four-in-four conference tournament run in its previous 39 seasons of basketball.

In 1999, the first of two Tim Carter-coached NCAA teams won two games in two days for the Southland championship in Shreveport, La.

In 2004, Carter took his team to the NCAA dance once again as Southland titlists with three wins in five days. The Roadrunners won in San Antonio, in Hammond, La., and then in San Antonio again (against Stephen F. Austin).

In 2011, the Brooks Thompson-coached Roadrunners won three games in four days to win a Southland championship at the Merrell Center in Katy.

Conference USA tournament. UTSA vs. Charlotte, Thursday at 5:30 p.m., at The Star in Frisco.