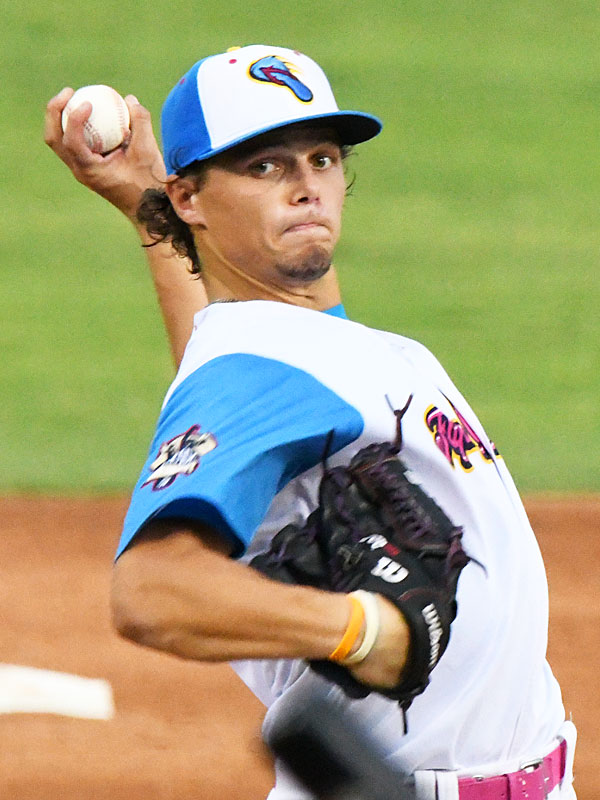 Austin Krob, from TCU, will start Tuesday night as the Flying Chanclas open a playoff series at home against the Brazos Valley Bombers. In his last outing, on Aug. 28, Krob pitched five scoreless innings against Amarillo. – Photo by Joe Alexander

When the Flying Chanclas de San Antonio open the Texas Collegiate League playoffs at home Tuesday night, it’s a fair question to wonder — will fans at Wolff Stadium see a Chanclas team that won 13 out of 18 during one red-hot stretch of the season?

Or, will they see the team that cooled considerably in recent weeks, losing five of its last six?

With some key roster additions on board, and with a weekend off to rest weary legs, the hope is that the Chanclas can turn on the jets again in a best-of-three, TCL South division series against the Brazos Valley Bombers.

“I think the guys got their second wind,” Chanclas manager John McLaren said. “I think we had a spell in there where we got tired, where we were dragging a little bit. I think we got our second wind.

“You know, we had our challenges, like all teams, with the (Covid-19) virus. We had a couple of guys go home early for school. We made a couple of roster moves.

“Picked a couple of guys up. We picked up (Jonathan) Tapia. He’s a local kid, and, we feel good about having him on the squad.

“The guys are very enthusiastic. They’ve never played this much before (in a compact schedule). So I think with a couple of days rest, getting away from the game a little bit, I feel good about it.”

Game 1 against Brazos Valley is set for Tuesday night in San Antonio at Wolff, where the Chanclas beat the Bombers two out of three and won 10 out of 14 overall this season.

The series shifts on Wednesday to Bryan and Travis Field, the home of the Bombers, where the Chanclas lost all three in a recent series. Game 3 would also be played in Bryan, if necessary.

McLaren said that Austin Krob, from TCU, will pitch the opener for the Chanclas. Krob’s friend and fellow TCU pitcher Marcelo Perez will start Game 2 in Bryan. The manager said he is undecided on his Game 3 starter.

Unexpectedly, the Chanclas got most of last weekend off.

They didn’t play their regularly-scheduled, season-closing, three-game series against the Round Rock Hairy Men. Friday’s game at Round Rock was canceled by rain. By the next day, games between the teams on Saturday and Sunday were scrapped, as Round Rock announced the end of its season because team members had tested positive for Covid-19.

In response, the Chanclas had some time to re-set. They played an exhibition game Saturday night, took Sunday off and had a light workout on Monday.

Here is the TCL playoff schedule as spelled out in a Monday morning Twitter post from the league office: