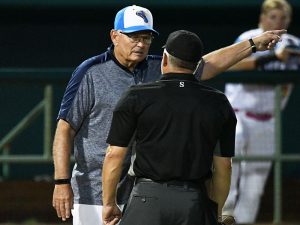 The Flying Chanclas have won five in a row overall and three in a row on the road for manager John McLaren. – File photo by Joe Alexander

It was the fifth win in a row for the Chanclas, who lead the TCL South division with a 9-4 record.

Trailing 2-0 after four innings, the Chanclas scored once in the sixth inning to get back into the game. In the seventh, they exploded against the Generals’ bullpen for five runs on six hits.

At one point, they scored on three consecutive at bats to silence the home crowd at Victoria’s Riverside Park. Tyler LaRue ripped an RBI single, and then Johnny Hernandez and Anthony Forte followed with back-to-back RBI doubles.

Forte, in his Flying Chanclas debut, finished with three hits, a run scored and an RBI.

Starting pitcher Austin Krob earned the victory, but the bullpen had a major say in the outcome with 5 and 2/3 innings of scoreless relief.

Reliever Johnny Panatex highlighted the effort with 2 and 2/3 innings of work and four strikeouts.

A big moment for Panatex came when he entered in the fourth inning with one out, the bases loaded and the Chanclas trailing 2-0. He escaped the jam when he struck out Jose Diaz and Josh Elvir.

San Antonio at Victoria, 7:05 p.m., Thursday. Victoria at San Antonio, Friday through Sunday, at Wolff Stadium. All at 7:05 p.m.

Forte, from the University of Richmond, started in right field He joined the team Tuesday, a spokesman said.