A former standout at Boerne Champion High School leads the Texas A&M Aggies in runs batted in through two games at the College World Series. In his first trip to Omaha, Jordan Thompson has rung up five RBIs, and that only tells part of the story. 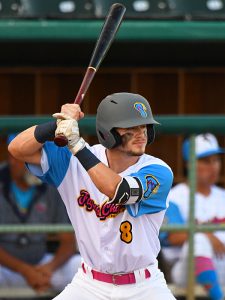 Pitchers facing the A&M sparkplug near the bottom of the batting order simply can’t get him out. Combining his performances in an opening loss to Oklahoma and a victory over Texas, the 6-foot, 175-pound firebrand has been on base seven times.

As the Aggies prepare to take on the Notre Dame Fighting Irish on Tuesday in Omaha, with both teams 1-1 and facing elimination, the season for Thompson and his teammates could hinge, at least in part, on whether they can stay committed to the team’s approach on offense.

In other words, don’t try to be a hero and inadvertantly swing at pitches out of the strike zone. Try to work the opponent into a hitter’s count. Thompson described the team’s approach after A&M’s 10-2 victory over Texas on Sunday.

“Me and my teammates have had the same approach all season,” he said in a video posted on A&M’s website. “We just keep going, one pitch at a time. If we get a hit, great. If we don’t, (try to) put a lot of pitches on the pitcher. Make him make pitches, and just pass the bat along to the guy behind you and have trust in them.”

Thompson’s showing in the CWS thus far epitomizes his own commitment to the team concept.

Not only has he stroked three hits in two games, including a three-run home run in a 13-8 loss to Oklahoma last Friday, he has been hit by a pitch once and has walked three times. Against Texas, Thompson reached base at a 100-percent clip — four for four.

In the second inning, he stroked an RBI single and later scored. In the decisive four-run fourth, he opened it with a double and, once again, ended up scoring. Coming up again in the fifth, Thompson walked and was erased on a force play. Later, in the seventh, he walked again.

With two out, he took first base, putting runners at the corners against UT reliever Zane Morehouse. The Aggies promptly turned it into a double steal and a run, with Thompson taking second and Ryan Targac coming home to make it 9-2.

For the fans, it wasn’t like the electicity-inducing, three-run homer Thompson delivered early against Oklahoma. But it was just the type of thing a teams needs if it wants to stay alive in the NCAA tournament at this point in the season.