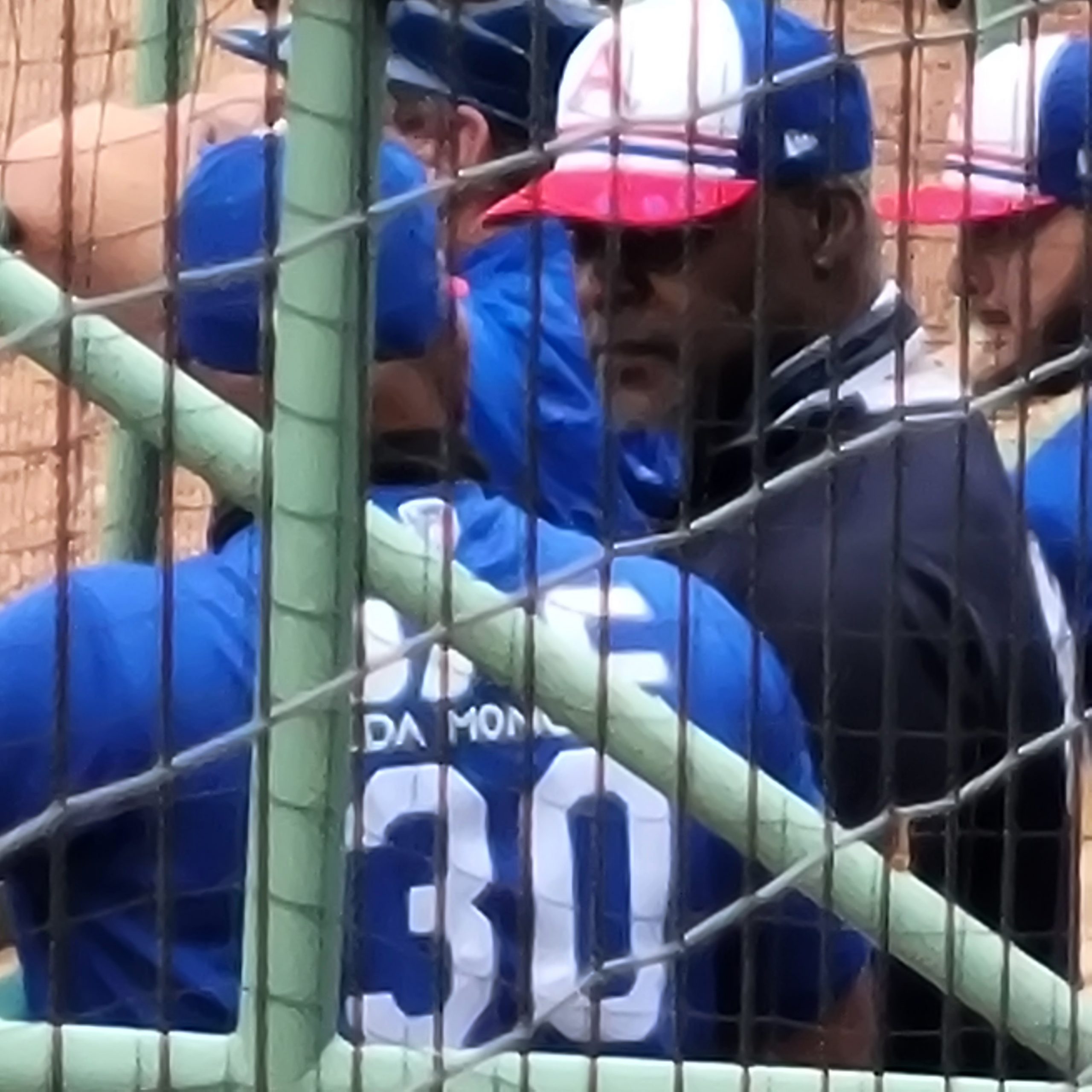 Acereros de Monclova pitching coach Dave Stewart returned to San Antonio on Thursday night. The Acereros defeated the Tecolotes de los Dos Laredos 4-3 in an exhibition at Wolff Stadium. Stewart pitched for the San Antonio Dodgers in 1978 and went on to become one of the best right-handers in major league baseball. — Photo, by Jerry Briggs

If you think about the most accomplished pitchers ever to have toed the rubber for a San Antonio minor league ball club, a short list comes to mind, including Pedro Martinez, Orel Hershiser and Fernando Valenzuela.

I had a chance to talk to another guy on that list, Dave Stewart, on the eve of tonight’s exhibition between the Acereros de Monclova and the Tecolotes de los Dos Laredos.

Stewart is the pitching coach for the Acereros, who play the Tecolotes in exhibitions tonight and Friday night at Wolff Stadium.

I caught up with the former World Series MVP in a telephone interview Wednesday.

A few newsworthy nuggets came up in our 20-minute conversation. Stewart, now 64, says he remains a principle in the effort to bring a major league baseball franchise to Nashville, Tenn.

After working for two seasons through 2016 as general manager of the Arizona Diamondbacks, he’s involved with a group lobbying MLB on behalf of Music City.

Stewart says he’s ready to get back into the game at the highest level.

“We’re still doing everything we have to do from our position to make that dream come true for the Nashville community,” he said.

I first met Stewart in 1978 when I was a 23-year-old, first-year reporter for the San Antonio Light, the local Hearst newspaper affiliate.

At the time, Stewart was a strong, 21-year-old kid from Oakland who stood out among some great athletes who had convened that summer to play for the San Antonio Dodgers.

At the time, Stewart was still trying to find his footing in the game, playing at the Double-A level for manager Don “Ducky” LeJohn.

The team was based at V.J. Keefe Field, at St. Mary’s University. Mike Scioscia, who went on to play and manage in the majors, was his catcher.

With the Mexican League games in San Antonio looming, Stewart said he has been thinking about that time of his life over the past few days.

Stewart was the ace of the San Antonio ball club’s pitching staff that year, posting a 14-12 record with a 3.68 earned run average.

I remember him as an athletic wonder, a guy who could seemingly pitch all night.

The records bear that out. According to the player register at baseball-reference.com, Stewart started 28 games and pitched 193 innings in San Antonio.

In the playoffs, Stewart was a master, fashioning a 10-6 record. He won title rings with the Dodgers, the A’s and the Toronto Blue Jays. He was MVP of two playoff series, including the 1989 World Series and the 1990 AL Championship Series, both with the A’s.

Those are the kind of games that defined his playing career, but I still remember him throwing fast balls from the mound at V.J. Keefe, when he was just a young guy out of Oakland with a dream.

Age changes all of us, but in many ways, Stewart hasn’t changed a bit. He still stays awake at night thinking about new challenges. One challenge is to try and become the first African-American with a majority ownership stake in the major leagues.

Initially, I asked him about his level of optimism that something good could happen for Nashville.

“So, I’m very optimistic that it will happen. But what I can’t tell you is when it’s going to happen.”

MLB commissioner Rob Manfred suggested only a few days ago that expansion franchise fees could be in the range of $2.2 billion.

“If in fact these assets are worth an average $2.2 billion, I think that’s kind of a lodestar in terms of where you would start in terms of evaluating expansion opportunity,” Manfred said in an Associated Press story.

“A lot of cheddar,” Stewart said.

Asked if he thought that figure would scare off any prospective owners, he said it doesn’t scare the Nashville group.

“We’ll be funded and ready to go.”

On a personal level, Stewart said it’s important to have an ownership group emerge that would include persons of color.

“Basketball, baseball, football — it’s important to all of us,” said Stewart, who is African-American. “We could talk about Derek Jeter’s ownership in the Marlins. Now, LeBron James has bought ownership in the Boston Red Sox. Magic Johnson has ownership in the Los Angeles Dodgers. Not one franchise is majority owned by a minority. When that happens, it will be ground breaking.

“It’ll break the glass ceiling, and in baseball, particularly, which is predominantly white, both on the field and in the (front) office, I think that would be trend-setting and ground-breaking.”

So, is there an African-American that could be the majority owner in Nashville?

Big dreams, indeed, for the former young star for the San Antonio Dodgers, who grew up without much material wealth in Oakland as the son of a man who worked on the docks.

“My dad was a longshoreman and my mom worked for the United Postal Service,” Stewart said. “To say we didn’t have a lot, I wouldn’t say that is correct. I’d just say, we had what we needed.

“We had a large family. Eight siblings. The values I had from my mother and father were that hard work (pays) and to always believe that you could accomplish the dream.”

After all these years, such dreams still drive Dave Stewart.

“I’ve been in baseball all my life,” he said “The next step in the evolution, for me, would be ownership. So, yes, I’d love to be in a position to own a baseball franchise.”

David Richardson from Tampa throws hard in the first inning for the Acereros de Monclova, who played the Tecolotes de los dos Laredos in an exhibition at Wolff Stadium. https://t.co/hyCDEtJ4sq pic.twitter.com/ulZ7ZfFJWa

The Acereros rallied to down the Tecos 4-3 Thursday night. The teams will play at Wolff again on Friday night, with former Cy Young award winner Bartolo Colon scheduled to start for the Acereros.

Moises Sierra of the Tecolotes can't catch up to a David Richardson fastball and strikes out to end the T1 at Wolff Stadium. https://t.co/hyCDEtJ4sq pic.twitter.com/y9e6T1p7nH