Moving into the final third of the 60-game, pandemic-shortened schedule, here’s a status update on some of the top names from the state of Texas in Major League Baseball. In other words, players in MLB who grew up playing in high school or in college in Texas. Here’s the scoop:

Clayton Kershaw — Battling nagging injuries over the past few seasons, the Los Angeles Dodgers lefthander continues to perform at a high level. But it’s uncertain how many more years the former Highland Park High School standout will play in the majors. Whenever he hangs it up, the next stop for Kershaw most likely will be Cooperstown. Hall of Fame credentials are already evident in his 13th season. Three Cy Young awards. Eight all-star berths. A no-hitter. A career 2.43 earned run average. Coming off a stint on the 10-day injured list with back stiffness, Kershaw nevertheless is 5-1 with a 1.98 ERA this year for baseball’s best team.

Paul Goldschmidt — Is former Texas State University standout Paul Goldschmidt riding a Hall of Fame arc in his career? He has 247 home runs and a .297 batting average over 10 seasons. He’s made six All-Star teams and has three Gold Gloves. So, he’s doing all the right things. But pundits say he may need to keep up the pace for another six or eight years, or so. At any rate, Goldschmidt is enjoying a solid pandemic-shortened season with the St. Louis Cardinals, ranking fourth in batting average (.330) and first in on-base percentage (.461) in the National League. Goldschmidt, 33, is a 10th-year MLB veteran. He attended The Woodlands High School. Moved on to Texas State University. Drafted in the eighth round in 2009 by the Arizona Diamondbacks.

Anthony Rendon — Coming off a big season with the world champion Washington Nationals, Rendon signed as a free agent in the offseason with the Los Angeles Angels. The third baseman from Houston’s Lamar High School and Rice University signed for seven years and $245 million, according to the Los Angeles Times. Rendon was drafted sixth overall out of Rice by the Nationals in 2011. He is hitting .291 with eight home runs and 25 RBI in 38 games this summer with the Angels.

Brandon Belt — The San Francisco Giants’ first baseman is having a solid season with a .324 average through Wednesday night. Belt was born in Nacogdoches and grew up near Longview. He attended the University of Texas.

Trevor Story — Story, in his fifth year in the major leagues, all with the Colorado Rockies, is one of the best young players in the game. At age 27, the former Irving High School standout has already made two National League All-Star teams. He is hitting .292 this summer. He’s got 10 home runs, and he leads the majors with 13 stolen bases.

Max just wanted to give that dog a ball. pic.twitter.com/FUSbxIlV7w

Max Muncy — Power-hitting Los Angeles Dodgers infielder was born in Midland and played in high school at Keller. He attended Baylor University. After a few years in the majors with the Oakland A’s, Muncy signed a minor league deal with the Dodgers in 2017. He re-discovered his confidence in Oklahoma City, before making a huge splash in the majors. He hit 35 home runs for the Dodgers in both 2018 and 2019. This year, he’s ripped 10 for the Dodgers, who have the best record in the major leagues.

Cavan Biggio — The son of Hall of Fame infielder Craig Biggio grew up in Houston and attended St. Thomas High School. In college, he attended Notre Dame. Biggio is in his second season as an infielder with the Toronto Blue Jays. He’s batting .247, with 6 HR, 21 RBI and a .794 OPS.

Trent Grisham — Grisham bats in the lead-off spot and starts in center field for the surprising San Diego Padres. A native Texan from Burleson, joined the Padres last winter in a trade with the Milwaukee Brewers. With the Brewers, he started for the Triple-A San Antonio Missions in 2019. This year, Grisham supplies speed and power to the Padres’ offense with a .269 average, eight home runs and 19 RBI. His OPS is a healthy .828.

Chris Paddack — The surprising 24-year-old Austin-area native was 3-4 with a 4.75 earned run average leading into Thursday night’s start for the San Diego Padres against the San Francisco Giants. Over two seasons, he was 12-11, 3.69. In 2015, Paddack entered pro baseball as an eighth-round draft pick by the Miami Marlins out of Cedar Park High School. He was traded to the Padres in June 2016 and made his big league debut for them in 2019.

Ross Stripling — The 30-year-old right-hander from Texas A&M is playing for the Toronto Blue Jays, moving over to the American League after a recent trade from the Los Angeles Dodgers.

Michael Wacha — Wacha, another right-hander from Texas A&M, is 1-3 with a 7.50 earned run average for the New York Mets.

Kyle Finnegan — Finnegan is one of the feel-good stories. After knocking around in the minor leagues for seven years, the former Texas State University standout made a major league roster for the first time this year with the Washington Nationals. Finnegan has pitched in 17 games out of the bullpen for Nationals manager Davey Martinez.

Tyler Naquin — Naquin, from Spring and Texas A&M, is playing outfield for the Cleveland Indians. Hitting .247 in 25 games, Naquin is bouncing back from a toe injury that had him on the injured list from July 22 to Aug. 11. The Indians drafted Naquin 15th on the first round out of Texas A&M in 2012.

Hunter Dozier — Dozier has played in 28 of 44 games for the Kansas City Royals, primarily at third base. He’s hitting .230, down from his .279 average last year. In 2013, he was the eighth overall pick of the Royals out of Stephen F. Austin University. Dozier was born in Wichita Falls and played in high school in Denton.

Corey Knebel — The Milwaukee Brewers are hopeful that reliever Corey Knebel can regain his form from 2018, when he was a key bullpen presence on a squad that surged to the National League Championship Series. Knebel sat out all of last season recovering from elbow surgery. He’s returned this year and pitched in 10 games with an 8.22 ERA. In his last outing, the former Texas Longhorns pitcher from Denton threw a hit-less and scoreless inning at Detroit on Tuesday.

Noah Syndergaard — The hard-throwing pitcher for the Mets underwent Tommy John surgery in March, ending his season. Syndergaard was the 38th overall pick by the Toronto Blue Jays in the 2010 draft. He was drafted out of Mansfield Legacy High School. Traded by the Jays to the Mets in 2012, he he broke into the big leagues in 2015. Syndegaard, who made the NL All-Star team in 2016, is 47-30 in his career.

Jameson Taillon — Pittsburgh Pirates pitcher hasn’t played this year after having Tommy John elbow surgery in February. Drafted by the Pirates in 2010 on the first round, with the second overall pick, out of The Woodlands High School. He’s 29-24 with a 3.67 ERA in his MLB career with the Pirates.

Kohl Stewart — The 25-year-old Baltimore Orioles pitcher from Houston St. Pius High School opted out of the season in July. “For the time being, I have decided to pause my participation in the 2020 season,” Stewart said in a statement published by the Baltimore Sun on July 31. “My elevated risk of serious complications of COVID-19 due to Type 1 diabetes continues to be of great concern. I am grateful to the organization, as well as my coaches and teammates, for their incredible support.” Stewart was selected fourth overall out of high school by the Minnesota Twins in 2013.

Beau Burrows — Pitcher Beau Burrows, a Fort Worth native who played at Weatherford High School, made his MLB debut this season. He’s pitched in four games out of the bullpen for the Detroit Tigers. 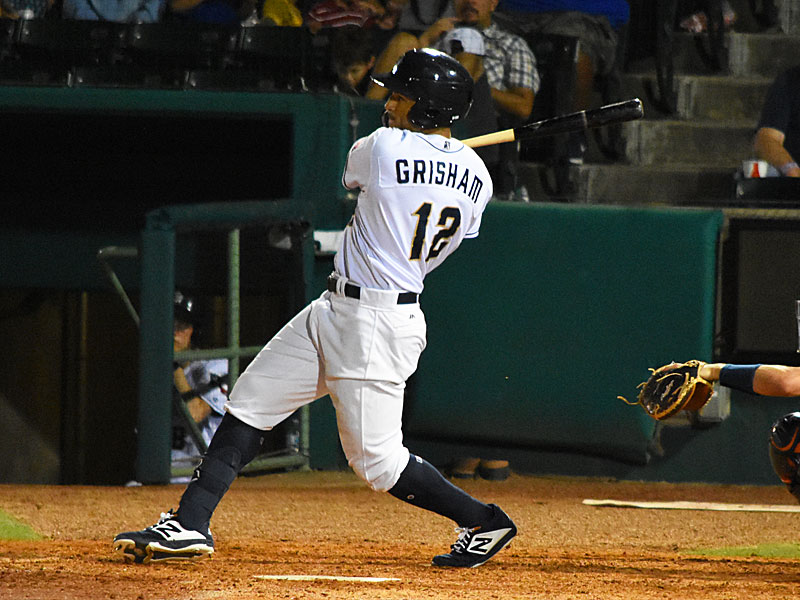 Trent Grisham played for the San Antonio Missions for part of the 2019 season before being called up by the Milwaukee Brewers. – photo by Joe Alexander