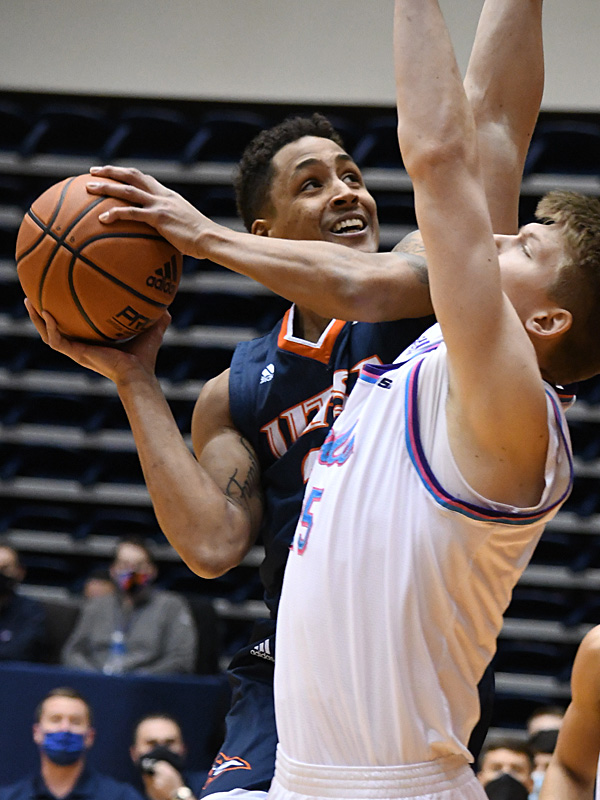 Eric Parrish came off the bench to produce 15 points and 5 rebounds Saturday as UTSA cruised past Florida Atlantic, 86-75. – Photo by Joe Alexander

But that didn’t stop him from trying to improvise on Saturday afternoon when he walked into the locker room and saw that his players were celebrating their fourth straight victory, an 86-75 triumph at home over the Florida Atlantic University Owls. 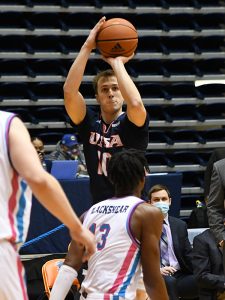 Erik Czumbel scored 11 off the bench for the Roadrunners, who improved to 12-9 on the season and 8-6 in Conference USA. — Photo by Joe Alexander

“You could tell on his face,” UTSA forward Parrish said. “He came in, jumping and moving. I don’t see him move too much like that. Not even at practice.”

Later, Henson confirmed that he let loose with some emotion.

“Oh, we got to celebrate ’em,” the coach said. “Gosh. You know, it’s hard to win college basketball games.”

On Friday night, a Conference USA weekend series against FAU started with UTSA winning 84-80 in a fast-paced game. The pace slowed substantially on Saturday afternoon as athletes on both sides struggled with the quick turnaround.

But UTSA got the best of it with five players in double figures and the team shooting 50 percent from the field on an FAU squad trying to find answers in the absence of leading scorer Jailyn Ingram.

Without Ingram, a 6-foot-7 forward, the Owls produced only a few good stretches in the game. In the early going, midway through the first half, they led by three. At that point, senior guard Jhivvan Jackson and his teammates seized control and never really let up the rest of the afternoon. 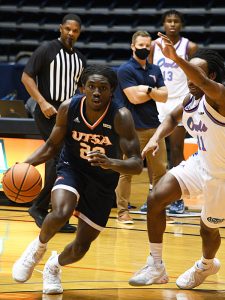 Senior Keaton Wallace, the No. 2 scorer in school history, had 14 points on 5 of 10 shooting against the Owls. — Photo by Joe Alexander

They surged into a seven-point lead at halftime. After intermission, they popped it open to 15 at one point and led by double digits almost constantly.

“We did a lot of good things two days in a row,” Henson said. “We’re on a roll here right now. We got to enjoy those. If I could dance, I would have danced, but I can’t, so we just jumped around a little bit. By the time I get in there, they always usually have celebrated a little on their own.

“You know, we got to ride this out. We’ve got different guys stepping up.”

With Jackson scoring 20 points to become the No. 2 all-time scorer in Conference USA and No. 86 in NCAA history, the Roadrunners completed a four-week run to jump from last place to fourth in the C-USA West division.

The Roadrunners haven’t won four in a row since a seven-game streak in 2018-19. The previous streak started in non conference, in December of 2018, and it carried into January of 2019, when they won first four games on the conference schedule.

This time, rolling along with a 7-1 record in the last four weeks feels especially sweet, especially after the squad started off with a 1-5 record in conference.

The Roadrunners complete the regular season with two games in Charlotte (9-11, 5-7), followed by two at home against the UAB Blazers (16-4, 9-3). The games against UAB are Feb. 26-27, dates that potentially mark the last two home games for UTSA senior stars Jhivvan Jackson and Keaton Wallace, the Nos. 1 and 2 scorers in school history. 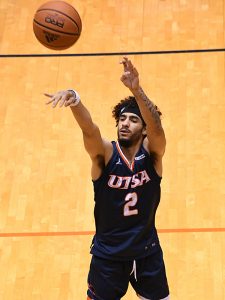 Jhivvan Jackson is 86th in NCAA Division I history and 2nd in the C-USA in career scoring with 2,461 points. — Photo by Joe Alexander

Jackson entered the weekend series against FAU with 2,411 and ranked No. 101 on the all-time NCAA Division I career scoring list. He scored 30 on Friday night and added a team-high 20 on Saturday, giving him 2,461, tied for 86th with 1950s-era La Salle star Tom Gola.

By moving into the NCAA’s Top 100 this weekend, Jackson passed the likes of Steve Alford, Chris Mullin, Glen Rice, Vernon Maxwell and Christian Laettner on the list. Now ranked No. 2 in C-USA, he bested former UTEP star Stefon Jackson, who produced 2,456 points in four seasons at UTEP through the 2008-09 season.

But his all-around game right now is as good as ever. On Saturday, for instance, he hit 8 of 13 shots from the field. Jackson also passed for nine assists and grabbed seven rebounds. For the weekend, he ran the team at point guard, hit 19 of 34 from the field and averaged 7.5 assists and 6.5 rebounds.

FAU played Saturday without Ingram, who averages 13.6 points per game.

Possibly limited by injury, he was held to 0-for-5 shooting on Friday night. UTSA forward Adrian Rodriguez (knee) sat out his second straight game Saturday against FAU. It’s not certain whether he will play at Charlotte but Coach Henson is hopeful.