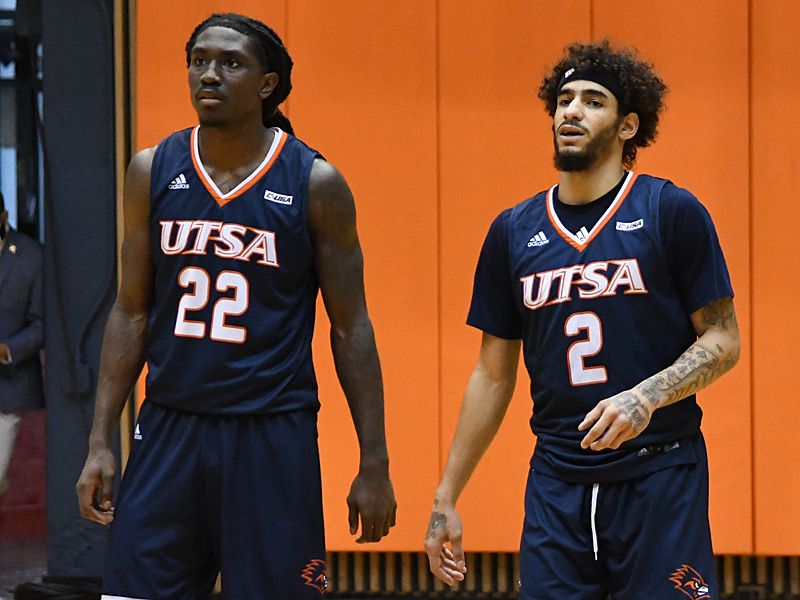 Keaton Wallace (left) joined Jhivvan Jackson in the 2,000-career point club on ‘Senior Day’ Saturday, when the Roadrunners rebounded from an ugly loss on Friday night to blow out the UAB Blazers. – photo by Joe Alexander

Leave it to UTSA senior guards Jhivvan Jackson and Keaton Wallace. Only those two could light up a drafty, old gymnasium and turn an overcast Saturday afternoon into one for the memory banks.

First, Wallace eclipsed the 2,000-point mark for his career mid-way through the second half against the UAB Blazers.

A few minutes later, Jackson unleashed a flurry of buckets to climb past 2,500 points. In the end, the Roadrunners played perhaps their best game of the season in claiming a convincing 96-79 ‘Senior Day’ victory over a 19-win team. 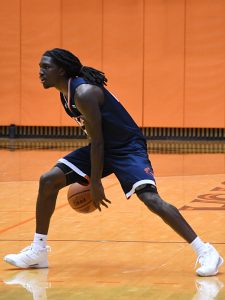 Keaton Wallace produced 22 points, seven rebounds and seven assists in what may have been his last home game. — Photo by Joe Alexander

If it was indeed the last time for Jackson and Wallace to grace the court at the UTSA Convocation Center, then it was done with appropriate style and flair, complete with a wave from the two of them to a Covid-19 restricted crowd of 394 as they walked off to the dressing room.

“We all know we got a lot of basketball left,” Henson said. “They’re going to have some emotional moments with their families right now. I was thanking them, and they were thanking me. Just appreciate everything they’ve done for this program.”

Jackson led the rout with 32 points, and Wallace added 22. As a team, the Roadrunners showed impressive resilience in bouncing back from a bad loss Friday to salvage a split in their two-game series with the Blazers. 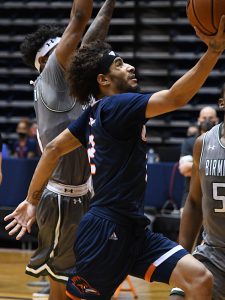 Jhivvan Jackson, held to 12 points in Friday’s loss to the Blazers, bounced back to score 32 on Saturday. — Photo by Joe Alexander.

“Pretty fitting for them to finish it off this way in the Convo (with) monster nights from both of them,” Henson said. “You know, they came in here four years ago and started making baskets and they just kept it going … There were a lot of nights when one or the other was clicking … But to have both of them have monster nights on Senior Day is very, very special.

“They’ve handled their business. They’ve both done a great job in the classroom. They’re great Roadrunners.”

UTSA played one of its best stretches of the season against a quality opponent in the first half, shooting 50 percent from the field and rolling to a 42-33 intermission lead.

Spacing the floor and taking care of the ball, the Roadrunners hit 17 of 34 shots, including 5 of 9 from three. In one span of a little more than seven minutes, UTSA produced a 16-0 streak against the Blazers, the top defensive team in Conference USA.

All of a sudden, an eight-point deficit for UTSA turned into a 23-15 lead.

The Blazers never got closer than five the rest of the way. With the Roadrunners shooting 65.6 percent in the second half, they pushed the lead to as many as 22, quite the turnaround from Friday night, when the Blazers claimed a 64-57 victory on the same floor.

The Roadrunners likely will not make up two games against Charlotte that were scratched last week because of the winter storm. But they could possibly schedule a non-conference game next week. Many C-USA teams will play make-ups next week for games that were lost to Covid-19 postponements. The C-USA is expected to announce next weekend the bracket for the tournament. All 14 teams — seven in each division — will be invited. The tournament is March 9-13 at Frisco.

When the Roadrunners came out in the second half, they unleashed a series of defensive plays that sparked a surge. First, the 6-foot Jackson soared high in an attempt to block a dunk attempt. Though he was called for a foul, the play clearly sent a message. On UAB’s next possession, 6-11 UTSA center Jacob Germany rejected UAB’s 7-foot Trey Jemison. Next time down, UAB’s Quan Jackson was rejected by UTSA forward Cedrick Alley, Jr.

It all translated into a rush of momentum for the Roadrunners. With 12:08 remaining, Wallace hit a three that made him the 615th player in Division I basketball history to reach 2,000 points. Later, as Jackson connected on a long ball with 10:06 left, he simultaneously hit the 2,500 mark and moved into No. 1 in C-USA history in three-point makes. When the day was done, Jackson had totaled 2,505 points and Wallace 2,007.

Having the last word

Jackson finished his day’s work by hitting 13 of 21 from the field and six of 10 from three. He described a flood of emotions when he and Wallace came off the floor for the last time with 2:26 remaining.

“You know, I kind of wanted to finish the game out, just because they got us yesterday, and, beating us every single year, in the Conference USA,” he said. “But, man, I was grateful. I kind of took this game as just a regular game. I was kind of pissed about yesterday. We played the right way yesterday. We (just) had a little too many turnovers. If we make even half our shots, we win.

“So, our mentality today was just getting no turnovers. You know, we only got nine in the whole game (today) … And we just got stops. That’s the reason we won today. We were stopping them. We held (down) their best player (Tavin Lovan, to seven points). That just helped us. We were just the tougher team today.”

Wallace punctuated his 22 points with seven rebounds and seven assists. He hit 8 of 13 from the floor and 3 of 4 from distance. “It’s just a blessing to be able to make history at our school,” he said. “Just for two guys to score the ball like we do, in the same backcourt, is big time. It speaks volumes. I just appreciate all the support. All the love from the fans. The staff. My teammates. And my family. You know, Birds up.”

Jalen Benjamin scored 21 points to lead the Blazers. Tyreek Scott-Grayson had 13 points, followed by Trey Jemison with 11 and Michael Ertel 10. Scott-Grayson and Tavin Lovan, both guards, have been key players on UAB teams that were 5-3 against UTSA over the past four seasons before Saturday. The Blazers have knocked the Roadrunners out of the C-USA tournament each of the past two seasons.