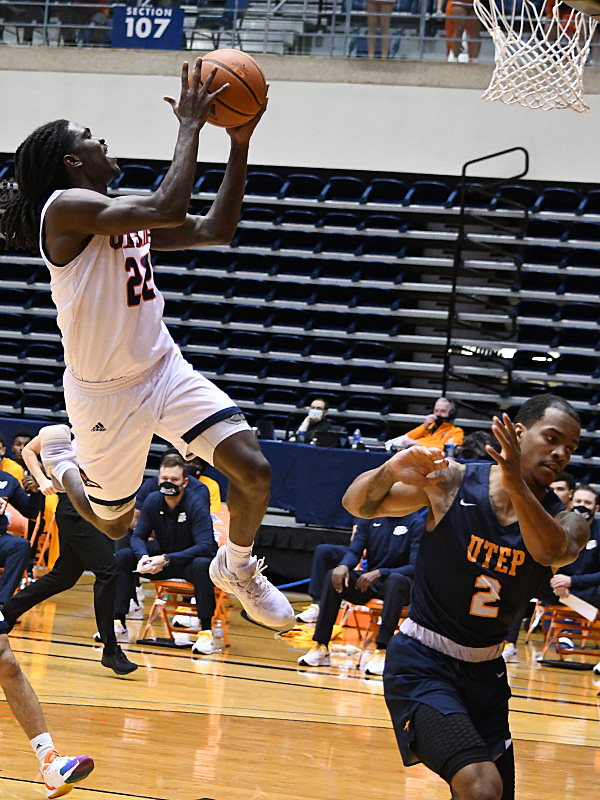 Senior Keaton Wallace enjoyed one of his best games of the season with 19 points, eight rebounds and nine assists. Meanwhile, UTSA scored an important C-USA victory over the UTEP Miners. – Photo by Joe Alexander

Very few teams in NCAA Division I basketball have backcourts as explosive as UTSA’s duo of Jhivvan Jackson and Keaton Wallace.

The two seniors were at their entertaining best Thursday night in the Convocation Center.

Jackson befuddled the Miners with a mix of long-distance shooting artistry and mid-range finesse, hitting 10 of 20 from the field. The senior from Bayamon, Puerto Rico, nailed four three-point shots.

For his part, Wallace sank 7 of 12 in a tour de force that included grit and defensive hustle from the 6-foot-3 Dallas native. 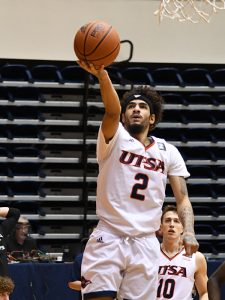 Jhivvan Jackson scored 32 for the Roadrunners. The senior guard is averaging 25.1 points in his last seven games. – Photo by Joe Alexander

Both Boum and Williams finished with 24 points. Williams, a 6-foot-8 post, was held to five of 11 shooting from the field.

After some erratic performances in the pre-conference phase of the schedule, including a 39-point loss at Oklahoma, the Roadrunners started C-USA play by losing two games at Rice, splitting two at home against North Texas and then dropping two on the road at Louisiana Tech. After the 1-5 start in conference, UTSA has now won three straight, all at home, against Southern Miss (twice) and now UTEP to get back into contention for postseason play. 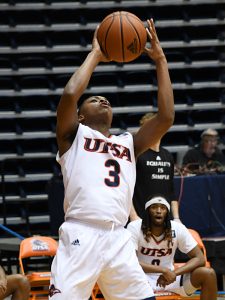 The Roadrunners started the homestand with a change in the starting lineup, moving junior Adrian Rodriguez into the first five. They made another move Thursday by starting freshman Jordan Ivy-Curry. With a starting five of Jackson, Wallace, Ivy-Curry, Rodriguez and Jacob Germany, the Roadrunners singed the Miners with 56.7 percent shooting en route to a 46-38 lead.

Keaton Wallace, on the slow start to the season — “I (felt) like it was never over. Even in the past, we always start off kind of slow. Then we start figuring some things out. Then guys start meshing together on the court … Then we get rolling. That’s pretty much how it’s been ever since I got here.”

In the three victories, UTSA has played solid defense in extended stretches to take charge. The Roadrunners did it again Thursday night. For a stretch of more than 10 minutes in the second half, they mixed up defenses, alternating from man to zone, and held UTEP to 3 of 16 shooting. Defensive highlights down the stretch included Rodriguez taking a charge from Williams in the post and the 6-foot-11 Germany extending to block a three-point shot by Boum in the corner. After the block, Germany batted the ball off Boum’s head. It went out of bounds, with the possession awarded to UTSA. 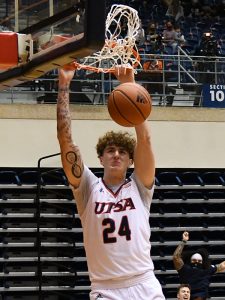 Keaton Wallace, on the key stops — “Those are the detail plays that we’re making now. You know, we weren’t making those plays early in the season. Just paying attention to little details like that. Knowing when to rotate. Playing the ball. Jumping to the ball, things like that. We’re always in the right spots on defense. Jacob getting the block in the corner. That’s just (game and practice) reps. He understands where he needs to be when the ball is in the corner. And A-Rod, the big (man) was driving … You knew that charge was going to be big for us. He got down there and took it.”

The Roadrunners will try to win their first road game of the season Saturday at UTEP. They’re 0-7 on the road overall, including 0-4 in C-USA road games. The status of injured forward Eric Parrish (Achilles) is uncertain after he sat out his first game of the season. If anything, the play of Jackson and Wallace gives them hope that they can start winning away from home. Combined, the two probably played as well in tandem as they have all season.

Coach Steve Henson, on Jackson and Wallace — “They stepped up on the offensive end and delivered in a big, big way.”

We missed 10 of our first 12 second-half shots until Jhivvan drilled this deep 2. He's got 15. #BirdsUp 🤙 | #RunWithUs pic.twitter.com/EztoeoztCO