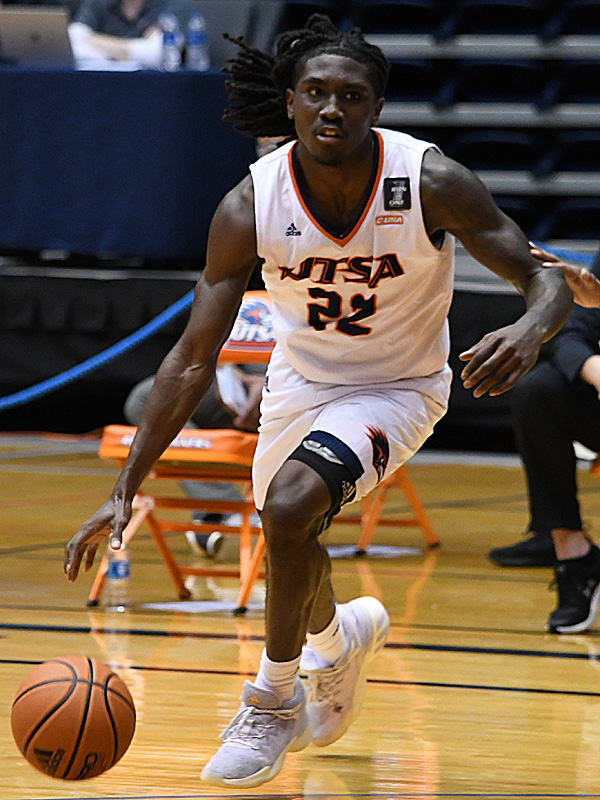 Keaton Wallace scored 16 of his team-high 21 points in the second half, but the Roadrunners failed to make enough plays down the stretch to beat the powerful UAB Blazers. — Photo by Joe Alexander

Quan Jackson scored 19 points for the Blazers, who snapped the Roadrunners’ four-game winning streak. UTSA entered the last C-USA series of the regular season having won seven of eight, but could not find a rhythm, shooting only 38.3 percent from the field. 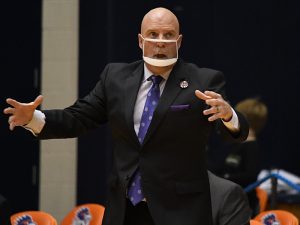 UTSA coach Steve Henson said the Roadrunners need to put the loss behind them and fight back on Saturday. — Photo by Joe Alexander

While Keaton Wallace scored 21 points to lead the Roadrunners, Jhivvan Jackson had a tough night, scoring 12 on 5 of 13 shooting.

The Blazers started both halves on 10-0 runs to stun the Roadrunners, forcing the home team to scramble.

“I feel we came out with the right mindset,” Wallace said. “They ended up hitting us in the mouth first, you know. And we had to fight back to get back in the game. We made a little adjustment. I felt like we weathered the storm early, and it was a back and forth game all the way to the end.”

UTSA doesn’t have much time to dwell on the setback as the second game of the final C-USA series of the regular season is set for 3 p.m. Saturday.

“I think our guys will bounce back,” UTSA coach Steve Henson said. “They know, we got to fight harder defensively against the penetrations. Got to take care of the basketball. And then we missed — golly — we missed some great, wide, wide open threes. That’s the way this game is, you know?

“If we knock down three or four of those wide-open threes … we’d all be sitting here thinking we played pretty well, which, we didn’t. But, that’s the nature of it. We got to put it behind us and bounce back.”

Jackson, the all-time leading scorer in school history, suffered a tough night after carrying the Roadrunners during the winning streak.

In the early going, he had trouble with a trapping UAB defense, as the Blazers often sent multiple long-armed players at him. On one play early, he tried a hook pass that was intercepted in the backcourt and dunked immediately.

Later, foul problems caught up with him. Jackson was whistled for reaching in on Tyreek Scott-Grayson with 10:55 left in the game. The call sent him to the bench with his fourth foul.

By the time he returned to the floor three minutes later, he couldn’t catch a break. On his first touch, he slashed between defenders for what would have been a beautiful layup, only to see the ball glance off the rim.

Later, he turned it over on a long, cross-court pass for Wallace that was too high. Next, Jackson misfired on a three. Altogether, he finished the second half with seven points on three of seven shooting.

Henson acknowledged that it’s important for UTSA to play well Saturday with it possibly being their finale before the tournament.

“If we can bounce back and play well tomorrow and look back on this recent stretch of games, as opposed to just these 40 minutes, if we play well tomorrow, hopefully we’ll feel good going into the tournament,” Henson said.

Despite 11 turnovers and at least two air balls, the Roadrunners cobbled together a 28-27 halftime lead.

UAB forced three early turnovers and converted the miscues into a 10-0 lead. Scott-Grayson and Jackson hit consecutive dunks in the burst for the Blazers. At the end of the spree, Scott-Grayson added a put-back for the final points, forcing a UTSA timeout.

In retaliation, the Roadrunners settled down the offense and constructed an 11-1 run. Cedrick Alley Jr. ended it with a three from the top of the circle to make it 11-11.

Both teams slogged through the rest of the half without much offensive finesse.

Trailing by two with 1:25 remaining, the Roadrunners got the best of it at the end, with Eric Parrish making a few plays.

First, he grabbed an offensive rebound and assisted for a Jacob Germany dunk. Next, he got ahead of the Blazers’ defense and was fouled, making one shot with 32 seconds left for the last point.