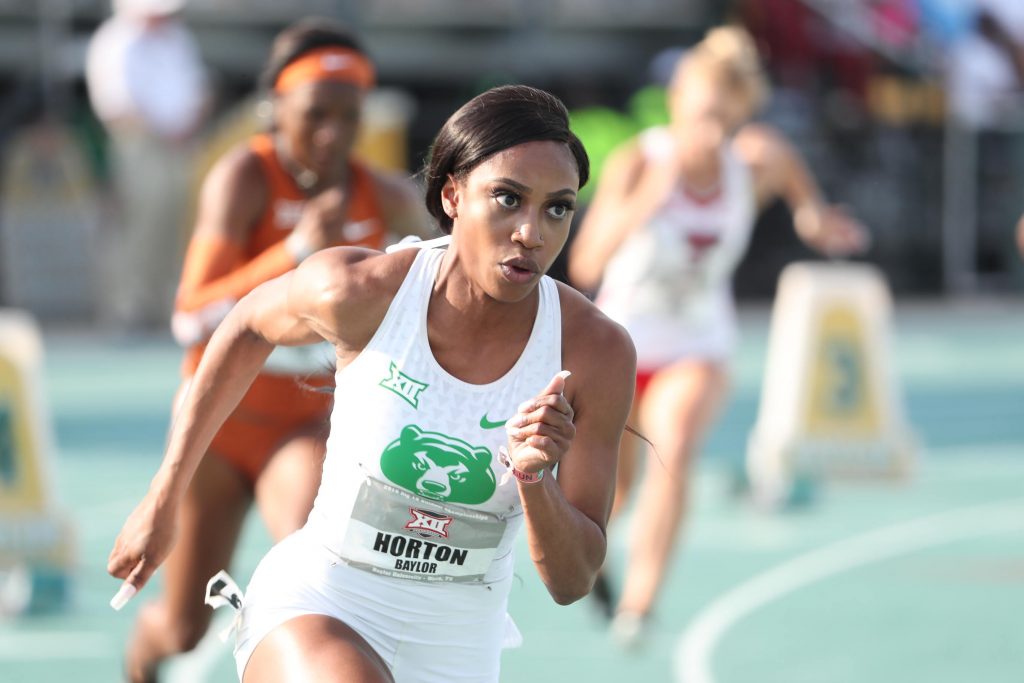 Sprinter Kiana Horton runs the anchor leg on a 4×400 relay that has qualified for today’s finals at the NCAA Track and Field Championships. Horton is a Baylor junior from Judson High School.

At the end of Kiana Horton’s day on Thursday, she felt elated. She felt like celebrating. The Baylor University sprinter also had reason to feel some pride, satisfaction and relief, as well.

All of those emotions surged after the Horton-led Bears’ 4×400 relay qualified for the finals at the NCAA Track and Field Championships.

“It was an amazing feeling,” Horton said. “You know, we were congratulating each other and telling each other how good we ran, and, just, basically saying, ‘That was good.’ We did what we had to do.”

As a result, Baylor will compete tonight in the 4×400 finals on the final day of the NCAA meet in Oregon, at historic Hayward Field. The Bears will run against some of the nation’s most dynamic mile relay units, including Kentucky and Purdue, the two teams with the fastest times entering the meet.

Horton is more than ready for the challenge. She has been training her whole life for the moment, actually. Born in Kansas, she moved to the San Antonio area and became a key member of one of the greatest girls track squads in area history at Judson.

As a two-year member of the team at Judson, he experienced success on both an individual and team level at the UIL state meets, winning a silver medal in the 200-meter dash in 2014 and a gold in 2015. Both years, the Rockets won team state titles under coach Renee Gerbich.

After high school, she moved on to Baylor, where she has overcame two injury-plagued seasons to become one of the top performers in the Big 12 Conference.

Horton, a three-time Big 12 outdoor champion, emerged in May as the high-point scorer at the championship meet after helping win the 4×100 and 4×400 relays. Additionally, she won the 400-meter individual title with a school-record time of 51.22.

In the past two seasons, she has competed at the NCAA Indoor meets but, because of injuries, has never made it to the outdoor nationals. Her first impression of the atmosphere at Hayward Field was one of awe.

“It was definitely nerve-wracking,” she said. “I was in shock. The crowd was probably one of the biggest I ever ran in front of. Getting in the blocks, there are people lined up on the side with cell phones and cameras. Like, right in your face. It’s like, ‘This is the time. If you’re going to do anything, do it today.’ ”

Horton’s day, initially, didn’t go as planned. First, she ran on a Baylor 4×100 relay that failed to qualify for nationals. Next, in her signature event, she came up short again. Horton didn’t make it past semifinals in the individual 400, which heightened her anxiety.

“I was definitely very upset at myself,” she said. “I was trying to keep on a positive face for my teammates. Let them know, ‘Hey, I might not have taken care of what I personally needed to take care of. But I’m not going to let you down. I’m still going to go out there and give 100 percent.’ ”

Victoria Powell, Taylor Bennett, Aaliyah Miller and Horton decided, enough was enough. In the 4×400 semifinals, they came through with a second-place finish to qualify automatically to the finals. The moment didn’t come without some drama, however, as Horton lagged in fourth place on the anchor leg with about 200 meters remaining.

“At that point I was just trying to stay poised and staying in my position and remembering to run my race. Because there were a lot of girls just … doing things that wouldn’t have worked in my style of running,” she said. “So I was just trusting my training and keeping poise, and realize that when it’s time for me to turn it on and kick up the notch, I can do it.”

It’s exactly what happened. Horton found an opening and turned it on down the stretch, passing two runners to claim the final automatic qualifying spot. Horton said the Baylor 4×400 relay isn’t finished yet.

“Saturday, it’s going to be spectacular,” she said. “We’re going for it all. Like, no resting, no sitting back, you know what I’m saying? We’re just going to go for it. Last race of the season. Last race of the year. We want to run a good race. Give it all we have.”