The season for record-setting UTSA freshman guard Jhivvan Jackson has come to an end.

“Unfortunately, Jhivvan suffered a knee injury that will require surgery,” coach Steve Henson said in a news release. “This is a season-ending injury.

“Jhivvan was having a terrific season for us. We have a fantastic team of athletic trainers and doctors who will take great care of him.” 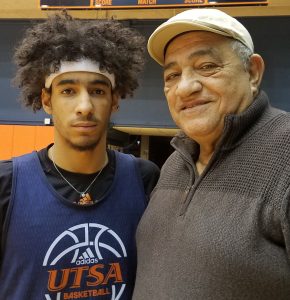 Jackson suffered the injury in the opening minutes of UTSA’s last game on Saturday night, a 74-64 home victory over Louisiana Tech.

The 6-0 guard from Puerto Rico had a magnetic resonance imaging (MRI) exam on Monday, and UTSA released the results Tuesday morning.

In 29 games, Jackson led UTSA to a 17-12 record, the most wins in a season for the Roadrunners in six years.

He also set the UTSA freshman scoring record with 534 points.

His effort surpassed the previous mark of 483 established 19 years ago by former Spurs player Devin Brown.

Jackson also made his mark nationally, averaging 18.4 points for he fifth highest average among freshmen in NCAA Division I.

Young leads all scorers in Division I.

Looking to the future

“Jhivvan’s support from his family is terrific, and he has an extremely bright future with us,” Henson said.

UTSA closes out the regular season this week with road games at North Texas on Thursday and at Rice on Saturday.

The Conference USA tournament is scheduled March 7-10 in Frisco.

He moved to the Dallas area in middle school and attended Euless Trinity High School.