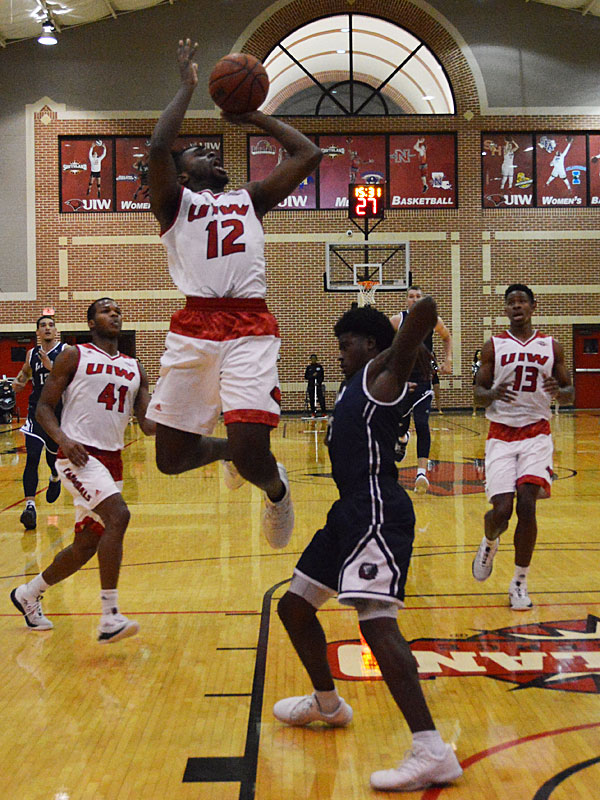 The University of the Incarnate Word on Wednesday night showed flashes of high-level execution on the offensive end that seemed to frustrate the Loyola Marymount Lions.

At times, the Cardinals would simply out-run the Lions from the West Coast Conference, pushing out to leads of 10 and 12 points in the first half.

But in the end, the Lions wore down the Southland Conference’s Cardinals with bigger athletes and a more physical style, rallying late in the second half behind point guard James Batemon for a 91-87 victory.

“Our biggest (issue) was, we gave up too many offensive rebounds, you know, and they got the ball too low (in the paint),” UIW coach Ken Burmeister said. “We couldn’t stop ’em.”

Trailing by seven in the second half, the Lions called on Batemon, who scored 10 points in a row to give Loyola Marymount a 77-74 edge with 4:25 remaining.

“Their point guard, Batemon, at the end of the game, he took it at us,” Burmeister said. “I thought both teams played with great effort. We missed a couple of inopportunity free throws (at the end).

“We caused some turnovers and we didn’t take advantage of (them).”

Batemon scored 20 of his game-high 26 points in the second half for the Lions (3-1), who won their third game in a row and their first of the season on the road.

Forward Eli Scott also did some damage, moving around with a muscular frame to produce 19 points and 12 rebounds.

Loyola Marymount essentially won the game on the boards, out-rebounding UIW 43-23, including 19-11 on the offensive glass.

For the Cardinals (3-1), redshirt freshman forward Christian Peevy hit 6 of 8 shots from the field and scored 20 points off the bench.

But Johnson, s 6-5 senior from New Orleans, was held to only three points in the second half.

He was not pleased with himself or with a rash of mistakes by his teammates in the last five minutes.

“At the end, at home, you can’t miss free throws like that, no matter who it is,” Johnson said. “That’s on us. We lost by four. We missed jump shots. We missed easy layups. We lost that game. I had a dumb turnover.

“Just several mistakes that cost us this game. But overall we’re going to learn from it. We’re going to bounce back. We played pretty good together, for the most part.”

Incarnate Word plays on the road Saturday at the University of Houston.

The status of forward Charles Brown III is uncertain. Brown went down with a leg injury in the second half and didn’t return.

UIW forward Shawn Johnson drives for a basket and draws a foul in the first half Wednesday night against Loyola Marymount. Video: theJBreplay.com