Cameron McGriff, Thomas Dziagwa and Lindy Waters III made sure on Wednesday night that the Oklahoma State Cowboys would not lose two in a row to start the season against teams from Conference USA. 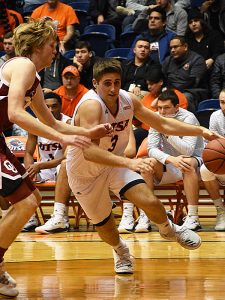 After dropping their opener to the Charlotte 49ers, the Cowboys cranked up the offense and pounded the UTSA Roadrunners 82-60 in their home opener at Gallagher-Iba Arena.

Oklahoma State (1-1) shook off a slow start, took a nine-point lead at halftime and then shot 62.1 percent in the second half to overwhelm UTSA (0-3).

Once again, turnovers and poor shooting plagued the Roadrunners, who are playing without injured scoring whiz Jhivvan Jackson.

Playing a second-straight opponent from the Big 12, UTSA had 18 turnovers to boost a three-game total to 57.

The Roadrunners shot 33 percent from the field. Byron Frohnen led UTSA with 11 points and nine rebounds.

UTSA will return home to prepare for the Gulf Coast Showcase in Estero, Florida. UTSA will open the event Monday against UC Irvine. The Roadrunners are scheduled to play three games in three days.

Trailing by 10 points in the first five minutes, the Cowboys rallied behind Dziagwa and McGriff to take a 36-27 lead at halftime.

Dziagwa had nine points and McGriff added eight points and seven rebounds to erase what had been a 9-0 lead by UTSA.

In the early going, Atem Bior had a couple of layups in the first three minutes for the Roadrunners. Nick Allen hit a layup with 14:52 remaining to make it 13-3. 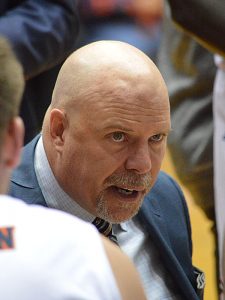 “We got to change our mindset. We’re just not playing the right way right now. We love our guys. They come to practice and they’re ready to go. But we just need so much more intensity and … physicality. We got a long, long, long way to go.” — UTSA coach Steve Henson said on KTKR radio.

UTSA has lost 19 straight games over the past nine years against teams from the five major conferences, plus the Big East.

Both played at Oklahoma State before going on to coaching careers that led to UTSA.

Rippetoe-Blair was killed in a motorcycle accident in Austin in 2014.

She coached the UTSA women’s basketball teams for 13 years through 2013 and compiled a 216-173 record. Rippetoe-Blair led the Roadrunners to NCAA tournaments in 2008 and 2009.