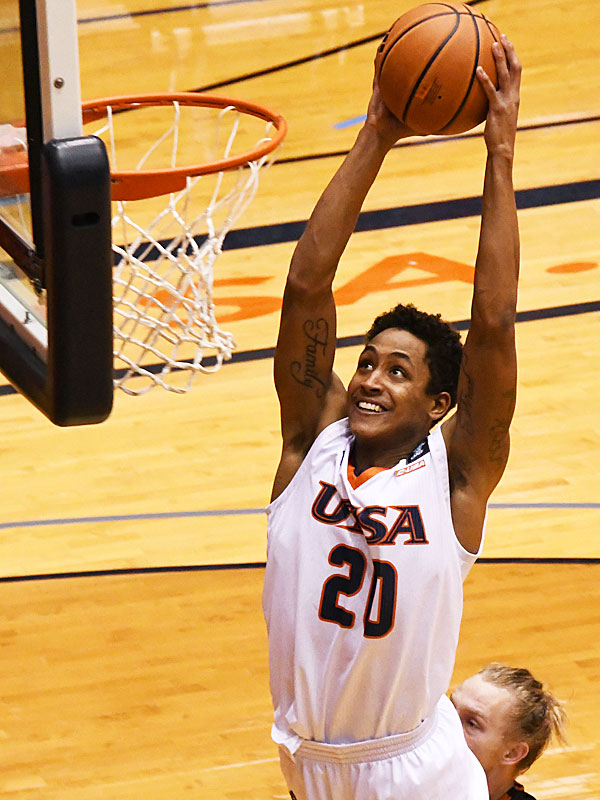 Eric Parrish scored 19 of his team-high 20 points in the first half in his first game for the UTSA Roadrunners. — Photo by Joe Alexander

Guard-forward Eric Parrish produced 20 points, four rebounds and four steals Friday in his UTSA debut, and the Roadrunners cruised to a 97-71 victory at home over the UT Permian Basin Falcons.

In addition, guard Keaton Wallace scored 19 points and center Jacob Germany 15 as the Roadrunners opened their 40th season as an NCAA Division I program. 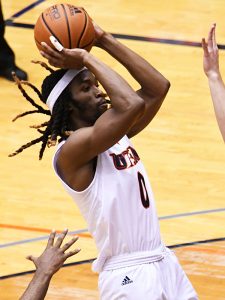 Cedrick Alley Jr. made his debut by stuffing the stat sheet with seven points, five rebounds, three assists, a blocked shot and a steal. — Photo by Joe Alexander

Center Malik Brikat had 22 points and 15 rebounds for the Division II Falcons.

A few minutes into the game, the Roadrunners roared off on a 22-2 run to take charge. By the end of the streak, they were up 35-11. The Falcons never got closer than 16 for the remainder of the afternoon.

“I really liked the way we started the game,” UTSA coach Steve Henson said. “(It was) terrific to see Parrish and Cedric (Alley Jr.) get off to a good start. Those guys are going to be so important to our season. Didn’t really know how they’d respond in a game situation … certainly they responded very, very well.”

Both were making their UTSA debut. Parrish transferred to UTSA from Nevada last fall, and coaches hoped they could obtain a waiver that would have allowed him to play last spring. But it didn’t happen. 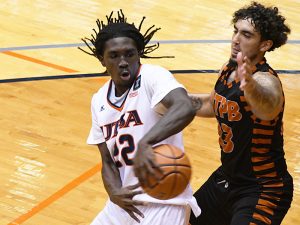 Keaton Wallace had 19 points and a team-high five assists. — Photo by Joe Alexander

UTSA won’t have much time to think about what went right and what went wrong against the Falcons. Game 2 looms in less than 24 hours.

The Roadrunners will play at 3 p.m. Saturday in Edinburg against Division I UT Rio Grande Valley.

“The game we just had is over,” Alley Jr. said. “It’s time to lock in on UTRGV and go down there and just handle business.”

Roadrunners star Jhivvan Jackson, the No. 2 scorer in the nation, is expected to play after sitting out against UTPB for violating team rules.

Nineteen seconds into the first game of the season, Parrish nailed a three pointer. He finished 7 of 11 from the field, including 2 of 4 from long distance.

Afterward, Parrish said he felt good about the team’s performance and tried to downplay his own contribution.

“I feel like I did some things well,” Parrish said. “Definitely a lot of things I’m going to look back on and see where I can improve and help my teammates. You know, it felt good to get this win. Now we’re looking forward to UTRGV.”

Parrish, a 6-foot-6 athlete with long arms, big hands and quickness, finished with 19 points and three steals at the half.

Alley, a 6-6, 230-pound transfer from Houston, hit three of his first four shots. Alley finished three of 11 from the field, but he filled the box with seven points, five rebounds and three assists, a blocked shot and a steal.

“If I could give myself a grade, I’d give myself a B minus,” he said. “I could have done a little bit more on the defensive end as far as rebounding. I don’t know how many offensive rebounds we gave up, a nice little amount, so I felt I could have brought a little more there.

“But, overall, I felt like I did a pretty good job.”

Playing off their defense, the Roadrunners rolled to a 57-29 halftime lead.

The Roadrunners held the Falcons to 31 percent shooting before intermission and cranked out an 18-2 advantage on fast-break points.

Even though UTSA star Jhivvan Jackson wasn’t playing, sitting out because of a violation of team rules, newcomers Parrish and Alley supplied energy and production from the very start.

Not only was it UTSA’s first game of the season, it was also the team’s first during the Covid-19 pandemic, with attendance limited in the Convocation Center and with chairs on both benches separated to mitigate the risk of virus spread.

“You look down at the bench, and the bench is all spread out. (You) Look down to sub someone in and you got to find where they’re sitting,” Henson said. “One of the things we’re going to have to figure out, is how we can get a little more communication with the assistants.

“Usually I’m up quite a bit. Walking up and down. When I do sit, (the other) coaches are giving me some pretty good input. Now, that’s a little harder. They’re farther away. I would have liked to have communicated with them a little bit better … We’re missing that because we’re so spread out.”

Because of the pandemic, UTSA’s schedule has already taken a hit.

The Roadrunners took a flight to Oklahoma Tuesday and found out Wednesday morning that their season-opening game that night had been postponed because of Covid-19 issues in the Sooners’ program. So, they boarded a bus Wednesday afternoon and traveled back to San Antonio.

“I feel like it took a lot out of us mentally because we were so well prepared,” Alley said. “But we couldn’t do nothing about it. It’s like a blessing from above because we could have (gone) out there and played (had) someone spread it to the team, and we’d have been out for two weeks. So it’s a blessing that we were able to come back and have a game today.”