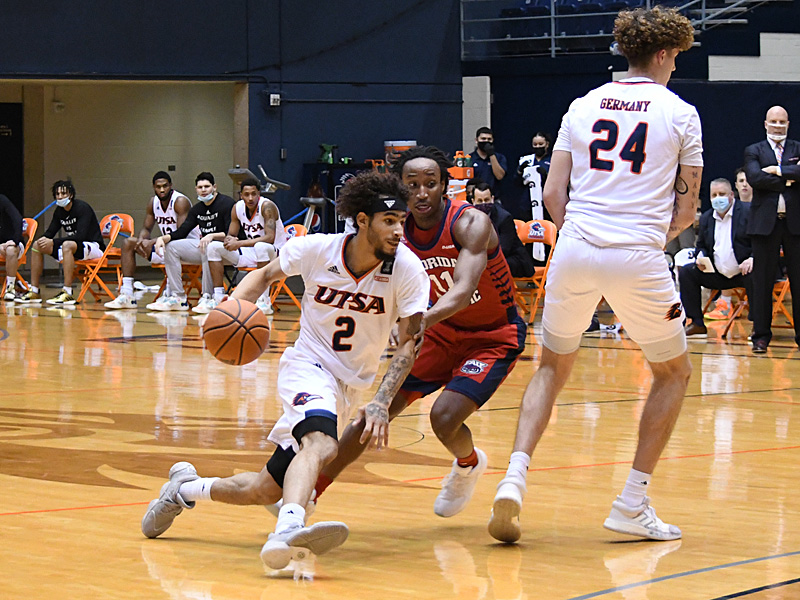 Jhivvan Jackson played the pick and roll to near perfection as he scored 30 points against Florida Atlantic University. With the performance, Jackson moved up to 93rd on the NCAA Division I career scoring list with 2,441 points, one ahead of former St. John’s great Chris Mullin. — Photo by Joe Alexander

UTSA coach Steve Henson likes to think some games come down to winning the “toughness battles.”

The Roadrunners won enough of them down the stretch Friday night and held on to defeat the Florida Atlantic University Owls, 84-80, for their third straight victory.

“Early in the second half, they came right at us,” Henson said. “Just drove it at us. (Grabbed) offensive rebounds. They won all the toughness battles there for several minutes. Drew a bunch of fouls on us. Looked up and we got five team fouls early in the second half. So we really challenged our guys in the one timeout to just play tougher.” 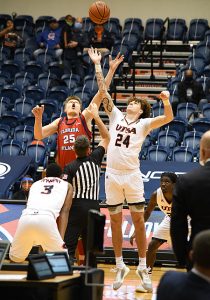 Jacob Germany battled with 6-foot-11 FAU center Karlis Silins and came up big with a career-high 26 points and 12 rebounds. It was his fifth career double double. – Photo by Joe Alexander

The Roadrunners built an early lead and survived 13 three-pointers by the Owls, moving to 6-1 in their last seven games.

Feeling confident, they’ll try to make it four straight wins and seven out of eight when they host the Owls in Saturday’s Game 2 of a Conference USA home series at the Convocation Center.

At the moment, it’s only Feb. 12, but with different players and combinations contributing each night, it feels like March can’t come soon enough for the Roadrunners, who are averaging 87 points in their last three.

“Each game we get in the win column, that’s just more fuel to the fire,” said Germany, who hit 13 of 21 from the field. “We’re going to try to be one of those teams that gets hot at the right time and just makes a run deep in the conference tournament.”

Jackson was masterful with 11-for-21 shooting, not to mention six assists and six rebounds, on a night when perhaps the best player in program history moved into the top 100 in career scoring on the all-time NCAA Division I list.

By hitting for 30, the 6-foot native of Puerto Rico increased his school-leading career total to 2,441 points, which moved him into 93rd place all time in Division I, one point ahead of former St. John’s University star Chris Mullin.

“Usually, a lot of teams limit my three-point shooting,” Jackson said. “And they always kind of have two guys on me. But I knew today, that team switches a lot. I knew I’d have to use the five (the center, for screens) a lot, and Jacob set some good screens for me.

Down to the wire

As it turned out, the Roadrunners needed just about everything that Jackson and Germany could give them.

The Owls converted on a four-point play with eight seconds left when Kenan Blackshear knocked down a three out of the corner, got fouled, and hit a free throw to make it 82-80.

“Once again, we brought too much drama into it,” Henson said. “Think we had a nine-point lead real late and didn’t quite close it out the way you need to. That was a little disappointing. But there were a lot of positives.”

FAU hadn’t played a game in 20 days because of virus interruptions, and it showed early. The Owls were erratic on the offensive end, leading to some easy baskets for the Roadrunners, who jumped out to a 15-4 lead.

Germany hit five shots in the streak, including a variety of hooks, jumpers and layups.