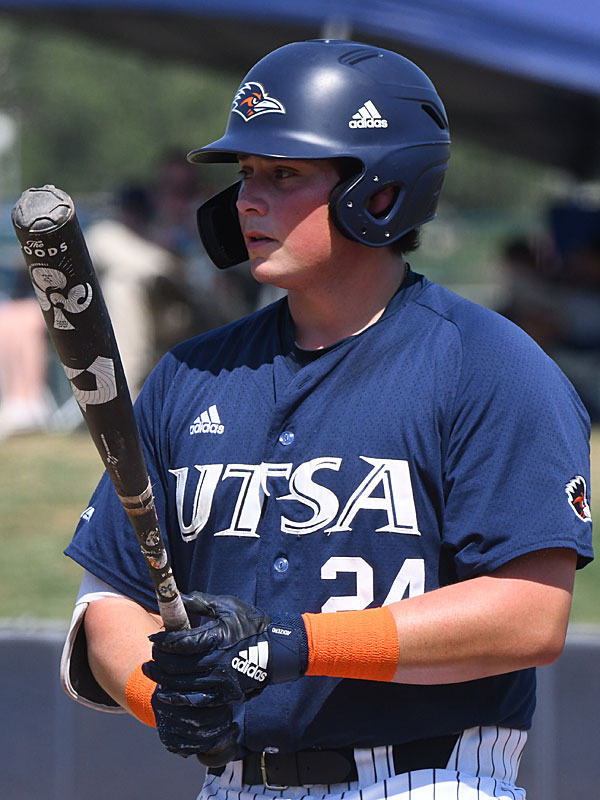 UTSA first baseman Ryan Flores, shown from a game earlier this season, hit a three-run homer in the sixth inning against Southern Miss.

Southern Miss beat UTSA 8-3 Saturday in Hattiesburg to stretch its lead in the Conference USA baseball standings back to two games.

UTSA (17-9 in CUSA) entered the game with a chance to tie 14th-ranked Southern Miss (19-7) at the top of the conference after the Roadrunners won the opener of the three-game weekend series on Friday.

Southern Miss and UTSA wrap up the series on Sunday at 11 a.m.

Ryan Flores accounted for UTSA’s only runs of the game. He hit his ninth home run of the season in the top of the sixth, a three-run shot that also scored Jonathan Tapia and Josh Killeen.

Southern Miss starting pitcher Hunter Riggins held UTSA scoreless the first five innings. He retired eight batters in a row before Tapia and Killeen worked back-to-back walks with one out in the sixth to set up Flores’ blast.

The Golden Eagles scored twice in the second inning and once in the fourth to take a 3-0 lead. They went back in front 4-3 with a run in the bottom of the sixth.

Southern Miss pulled away with four runs in bottom of seventh including two-run homer by Carson Paetow.

UTSA pitchers surpassed the school record for strikeouts in a season. Quiroga recorded strikeout No. 455 to break the record. The Roadrunners’ added one more strikeout in the game to raise their total to 456.

UTSA pitcher Luke Malone (7-2, 2.53 ERA), originally scheduled to be Saturday’s starter, pitched the final inning as Friday’s closer. He could be up for the start on Sunday.

Hurston Waldrep (5-1, 2.54 ERA) is the expected starter for Southern Miss.