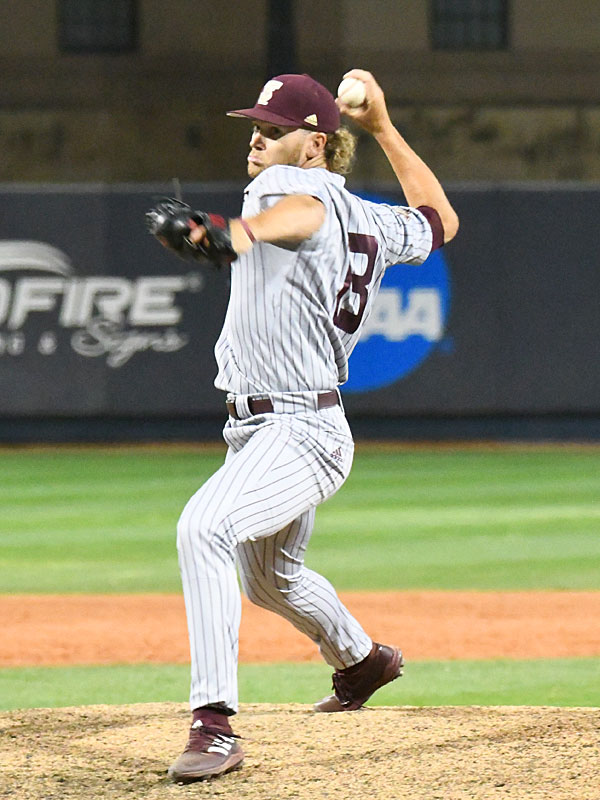 Tristan Stivors, Texas State’s All-American closer, started and pitched seven innings against Stanford. He gave up one run in a masterful performance, only to see his team let a late lead slip away. Here, he is shown pitching on April 26 at UTSA. – Photo by Joe Alexander

A record-breaking baseball season for the Texas State Bobcats came to a heartbreaking end Monday night in California. Leading by two runs going into the bottom of the ninth inning, the Bobcats couldn’t hold on.

The home-team Stanford Cardinal scored three runs in their last at-bat and escaped with a 4-3 victory to claim the championship of the NCAA tournament’s Stanford regional.

“Last game of regionals, we pushed it to the brink,” Trout told reporters at the game site in Palo Alto, Calif. “Obviously thought we had it, going up 3-1. I mean, you got to tip your hat. They took some great swings in some big moments … That’s why they’re the No. 2 team in the country.

“Just couldn’t be more proud of my guys.”

With the victory, Stanford (45-15) advanced to the Super Regionals. The Cardinal, the No. 2 seed in the 64-team NCAA field, will host the Connecticut Huskies this weekend in a best-of-three series.

The Bobcats (47-14) likely will lament the lost opportunity for some time.

Texas State, frustrated with an inability to hit with runners on base for most of the evening, finally put it together in the top of the ninth.

They broke a tie and took a 3-1 lead when Wesley Faison ripped a two-run single off Stanford reliever Braden Montgomery.

Moving to the bottom of the ninth, they were three outs away from their first regional title and their first Super Regional, which would have been held on their home field in San Marcos.

But just as their vocal fans in attendance started to think about winning on the home field of one of the nation’s most storied programs, the lead slipped away. Stanford sophomore Drew Bowser opened the inning with a solo homer to left field.

Duly inspired, sophomore Tommy Troy followed with another solo blast, this one to deep center. Centerfielder Isaiah Ortega-Jones leaped for the ball, but couldn’t reach it. Just like that, the Cardinal had tied the game, 3-3.

At that point, Texas State pulled reliever Zeke Wood, who gave up both homers. Levi Wells entered to try and put out the fire, only to have Eddie Park greet him with a single — his fourth hit of the night.

Park moved to second base on a sacrifice bunt, which prompted Texas State to walk Brock Jones intentionally. With runners at first and second, a double play could have ended the inning. But it wasn’t to be.

As freshman Trevor Haskins entered the game as a pinch-hitter, Wells threw a wild pitch, allowing runners to move up to second and third. Wells appeared to hang a slider, and Haskins stroked it to left for a single, which scored Park with the winning run.

“A lot of respect for Texas State,” Stanford coach David Esquer said. “What a quality team. Obviously it went right down to the very end. They were unbelievably good and tough on us. We had to dig down deep for a miracle there at the end.”

Texas State finished with a school-record 47 victories and won the regular-season title in the Sun Belt Conference.

The Bobcats entered the NCAA tournament ranked second in the Stanford regional and opened Friday with a 7-3 victory over UC Santa Barbara. They followed Saturday night by matching up against the home team and claiming a 5-2 victory, which snapped a 17-game winning streak by the Cardinal.

Not only was it the first 2-0 start for the Bobcats in a regional, it put them in position to close out with the regional title on Sunday night.

Stanford didn’t let that happen. The Cardinal won an elimination game against UC Santa Barbara, 8-4, on Sunday afternoon. A few hours later, they took on Texas State for the second straight night and won — again by an 8-4 score.

In the winner-take-all game Monday, Trout flipped the script with his pitching. He elected to start All-American closer Tristan Stivors, who responded with a dazzling performance.

Stivors, a senior from San Antonio-area Medina Valley High School, toiled for seven innings and held the powerful Cardinal in check. In a 101-pitch drama, he gave up one run on eight hits. Stivors struck out nine and walked one.

Trout said he was looking for two or three innings from Stivors, who led the nation with 18 saves this year.

“For us, it was mainly, just get off to a good start, whatever that looked like,” Trout said. “You know, just kind of watch his stuff and how they reacted to it. He just kept pounding it in there. When we finally got out (to see him) in the seventh, he was losing a little bit (of his stuff), and I was going to pull him for the lefty, and he looked at me and said, ‘Don’t take me out.’ That’s just who he is.

“I hope the kid pitches in the big leagues, because he has the stuff, he has the guts to do it.”

While Stivors was making big pitches, a cadre of Cardinal pitchers were doing the same. Texas State finished the game with 10 hits but left 11 runners stranded. With runners on base, the Bobcats were 4 for 20. With runners in scoring position, they were 2 for 13.

“I’m so proud of that pitching staff,” Esquer said. “Drew Dowd, who went as long as anybody, 2 and 1/3 (innings). From Dixon to Meier to Bruno, who pitched for the third day in a row. Montgomery, we pull (him) out of right field. What a lot to ask of him, to go two innings for the first time in a long time.

“No blame on what he did for us. And then Brandt Pancer obviously coming in, and getting that last out in the ninth. Just proud of this team.”