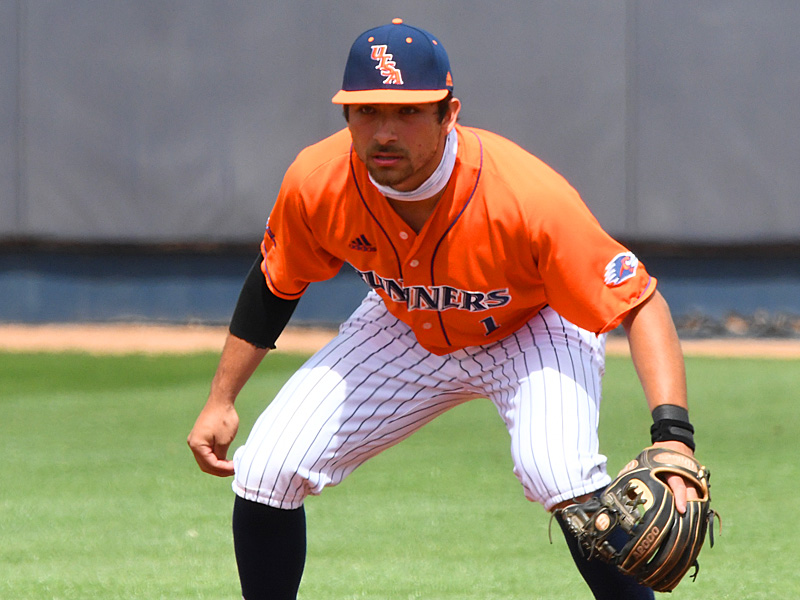 Fifth-year UTSA senior Jonathan Tapia is projected to start in center field tonight at Tarleton State but also is also expected to play this season in the infield. — File photo by Joe Alexander

Jonathan Tapia, a fifth-year UTSA senior from O’Connor High School, will lead the Roadrunners into Stephenville tonight as they open the college baseball season on the road against the Tarleton State Texans. Tapia, a preseason pick on the all-Conference USA team, has graduated with a bachelor’s degree in kinesiology and is working on his master’s in business. I met Tapia earlier this week for an interview at Roadrunner Field.

How do you think the team looks?

What about for the long term? What do you think is this team’s potential?

What about the pitching staff makes you so optimistic?

We got a lot of new guys. New faces. Guys with good stuff. Guys with velo.

What about from your vantage point. You’re starting in center on Friday night. What do you see in terms of the defense up the middle?

Shortstop Kody Darcy is a new face. What do you see from Kody?

I love Kody. Kody’s a good guy. He’s going to be in our lineup every day. He brings a good (skills at) shortstop and a good bat as well.

I see from watching this practice today that he’s got a lot of range.

Yeah, we need that up the middle.

Are you going to be all over the place this year, defensively? I saw you played center today. A little at third. A little at second?

Per usual. I’m going to be utility. I like that. You got to keep the mind guessing. Is what I like to say.

A friend of mine says he saw you shifted from third base to second in one inning last year.

I think it was in the Rice series I did that. I was at third, and then when a lefty (hitter) would come up, I’d go to second. It’s interesting in the scorebook, because (a ground ball to second) will be a 5-3 putout in the book.

Do you like having that multi-faceted role with the team?

What do you remember most about last season?

Last season? Last season was kind of a blur, honestly. As a team, I really think we swung the bat really well. And I think this year’s going to be the same thing. Like I said, hitting comes and goes. We might struggle, but in the next game, it’ll come back.

Yea, man, it was tough. Obviously, we played a good LA Tech team. Losing to them by one run in extra innings. We played them the week before and lost to them in extra innings, as well. It just shows that we can hang with the big dogs up there.

How do you feel about this being your last ride with the Roadrunners?

I’m going to go out there and give it all I got, like I’ve done all four years. Just going out with the guys and having fun. I mean, that’s all you can do. It’s just a game. I mean, you got to have fun playing baseball.

I don’t really like to brag about myself. I mean, I just … school’s hard, as it is. That’s why I’m going to school. Playing baseball and going to school, my family and everybody just keep me on top of everything. Especially our advisor. Beth Noteware. She always helps us with everything that we need.

You study kinesiology, right. Have you graduated already?

What do you hope to do with kinesiology, plus business?

Evidently, I want to open up my own business. A baseball-related business. Kind of like the D-1s that you see in Boerne. All of that stuff. I kind of want to do that. There’s a lot of things I could do right now with a masters in business degree. That’s kind of what I want to do.

Are you going to try to play some pro ball next year?

Yes sir. That’s the No. 1 goal right now, (although, and) I forgot who told me this. But, it’s not the end of the world if you don’t go play pro ball. I gave it all I got all five years (here). That’s all I can ask for.