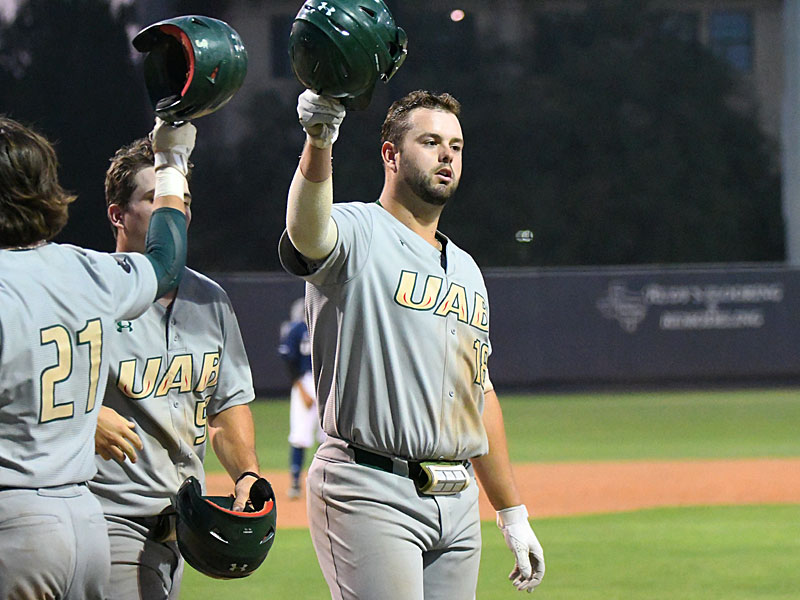 UAB first baseman Josh Sears had four hits, including two home runs, as UAB opened a three-game series against UTSA with an 18-7 victory at Roadrunner Field. — Photo by Joe Alexander

The UTSA Roadrunners needed a victory to kick-start their drive into next week’s round of postseason play.

They also wanted to win to keep adding to their season-long record of success, to show the NCAA tournament committee that they are indeed a worthy choice for an at-large bid.

What they got, instead, was a dose of humility.

“It’s always good to win (a series opener),” first-year UAB coach Casey Dunn said. “I thought Josh Sears did a really good job of driving in some runs and creating a couple of big offensive innings for us.

“And I was really pleased with (relief pitcher) Tyler O’Clair tonight. We had kind of pre-determined that (starter) Jackson (Reynolds) would only go two innings, getting him ready for the (Conference USA) tournament next week. 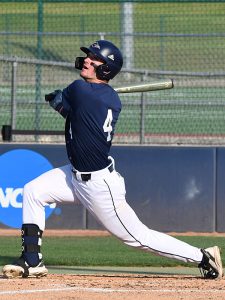 “You know, Tyler being able to come in and throw four innings and do it fairly cleanly — they took some good at-bats against us and scored a couple — but for him to get us to the seventh inning with the lead I thought was really big.”

Sears hit a solo home run in the second inning, a long ball belted high into the screen over the left field wall.

He added a single and scored a run in a six-run third. After a fly out in the fifth inning, Sears came to bat twice in a 10-run seventh. First time up, he singled and scored. Next, he added another monstrous blow to left, a three-run homer.

The two long balls increased his season home run total to 17. His four RBIs gave him 63.

Surely, going into Game Two of the series Friday and Game Three on Saturday, the Roadrunners will have his name circled. Or, underlined. Or, adorned with an asterisk. Or, something, when they display the UAB lineup card.

“Josh has real power,” Dunn said. “I think if you asked him, I think he’d probably tell you he’s underachieved this year for what his expectations are. You know, he was really hot early in the year for us. He scuffled here in conference play. Hopefully he can get it rolling … and be that threat in the middle of the order for us.”

The next two games loom large for the Roadrunners.

They probably need to win both of them, and then win at least a couple next week at the C-USA tournament, in order to receive serious consideration as an at-large candidate for the 64-team NCAA field.

Of course, UTSA could make the NCAAs by claiming the C-USA’s automatic bid.

But that would be the tough road, as the Roadrunners would need to win the tournament. The C-USA tournament is May 25-29 in Hattiesburg at Pete Taylor Park, the home of the regular-season Southern Miss Golden Eagles, who clinched the title Thursday night with a road victory against Middle Tennessee.

For the Blazers, the goal remains just to keep playing well and try to build some confidence and get the pitching ready. They’ve clinched a spot in the tournament with the eighth-best record and can’t move up or down. The Roadrunners, who were within one game of the C-USA lead last week, are locked in a five-way tie for third place in the standings.

It was a tough outing for UTSA starting pitcher Daniel Garza, who suffered his first loss of the season. Garza (3-1) pitched three innings and was responsible for seven runs on seven hits. The Blazers touched him for six hits and six runs — four earned — in the third inning as the visitors started to blow the game open.

After the Blazers exploded for 10 runs against the UTSA bullpen in the top of the seventh, the Roadrunners trailed in the game, 17-3. UAB’s 18 runs were an opponent season high against UTSA. UTSA’s five errors tied a season high from an April 17 loss at Rice, in which the Roadrunners fell by a score of 16-7.

Abraham DeLeon emerged as a bright spot on the UTSA pitching staff. DeLeon, a redshirt sophomore from Spring, pitched three innings and allowed only one run on one hit. It was DeLeon’s first appearance since April 17.

The Southern Miss Golden Eagles have clinched the regular-season title and the No. 1 seed in the C-USA tournament. The Golden Eagles locked up the championship with a 9-4 victory at Middle Tennessee, coupled with an 11-3 loss by second-place Louisiana Tech at Charlotte. Southern Miss (39-14) has two more to play in the regular season, both at Middle Tennessee on Friday and Saturday, before returning home to prepare for the tournament.