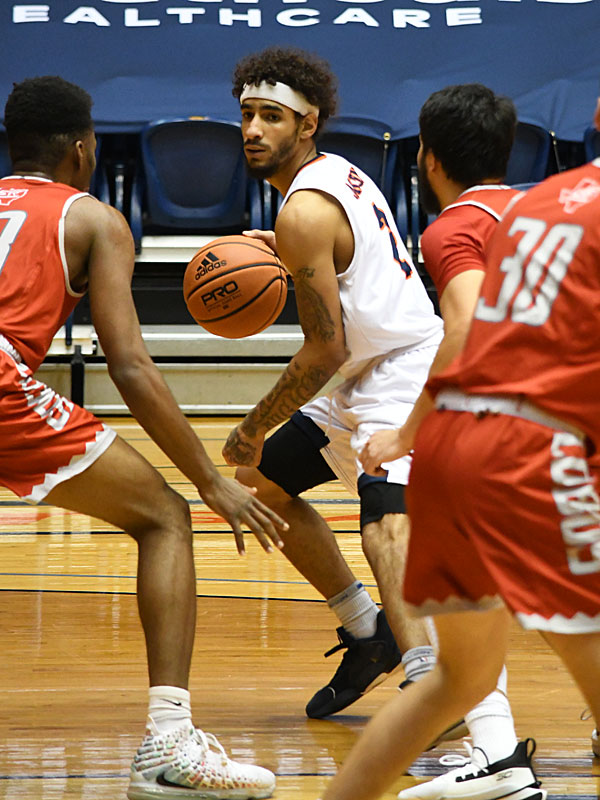 UTSA guard Jhivvan Jackson produced 18 points and four assists and did not commit a turnover against the Sul Ross State Lobos. — Photo by Joe Alexander.

Who needs sleep? The UTSA Roadrunners didn’t get much of it in between a road game at Oklahoma on Thursday night and a Friday night home game against the Sul Ross State Lobos.

But, somehow, they got all that they needed, bouncing back from a 39-point loss to the Sooners with a 91-62 home victory over the Division III Lobos.

The Roadrunners started slowly, falling behind by five points in the first few minutes. But once Jhivvan Jackson and the Roadrunners found a rhythm, they rolled to an easy victory.

Highlights included a balanced offensive attack featuring double-figures scoring from Keaton Wallace (19), Jackson (18), Eric Parrish (14) and Erik Czumbel (10), and also a defensive effort that held the Lobos to 29 percent shooting in the second half.

Omar Boone scored 17 and Tristen Licon 16 for the Lobos. 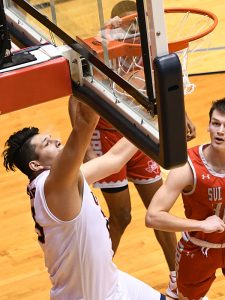 UTSA forward Adrian Rodriguez had four points off the bench, including this dunk. – photo by Joe Alexander

Scoring whiz Jhivvan Jackson, who played off guard for most of the first three years of his UTSA career, continues to get significant playing time at point guard. He struggled some with it at Oklahoma with turnovers early in the 105-66 loss. But he did a good job against Sul Ross, passing for four assists against no turnovers. He also produced three steals.

“I think I like that role. Before I came to UTSA, that’s the position I played. I know that most of the time I’m going to get the attention, so, I’m very unselfish and I want to make the right play. Me being at the point, I can get my teammates the ball and they can make plays, for sure.” — Jhivvan Jackson, on playing the point. 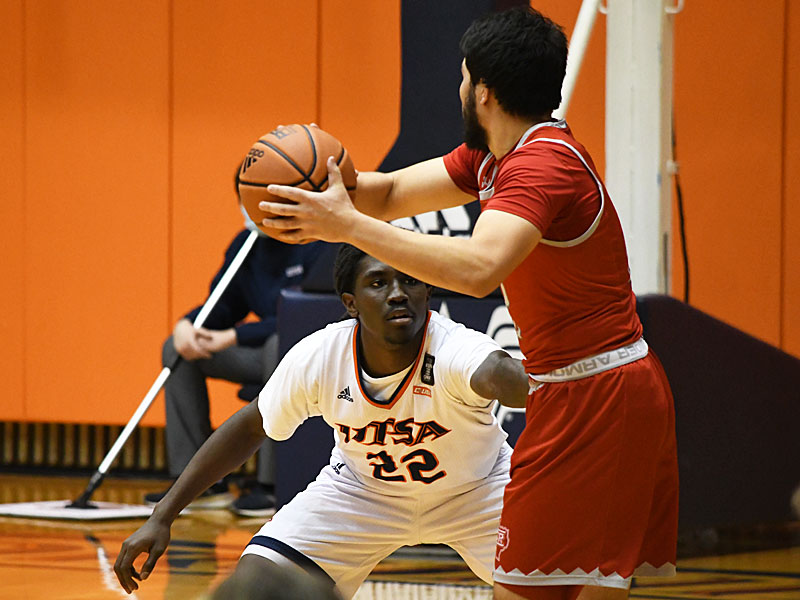 Keaton Wallace had a team-high 19 points for UTSA in Friday’s victory over Sul Ross State. – Photo by Joe Alexander

UTSA’s Steve Henson said his players encouraged him to put on a full court press early in the second half.

“They were definitely hungry to do that, in that case,” Henson said. “We felt a little momentum building. Our players came into that timeout wanting to put on the full court press. There’s a couple of other possessions where they had a side out of bounds, and we got a bunch of guys slapping the floor. I think Phoenix (Ford) helped us in that regard. Cedric (Alley) got going with that.

“We’ve been challenging Cedric to become a big part of that. He needs to join Keaton and Czumbel and be those rocks that we have on the defensive end.”

Henson said after the OU game that he wanted to see more intensity and more toughness from his players, and he said he liked what he saw in that regard against Sul Ross.

“We didn’t fix everything in 24 hours,” he said. “This was not the kind of game where we’re going to be able to draw a ton of conclusions. That’s kind of been the challenge with our opponents and our schedule. Oklahoma obviously is very talented.