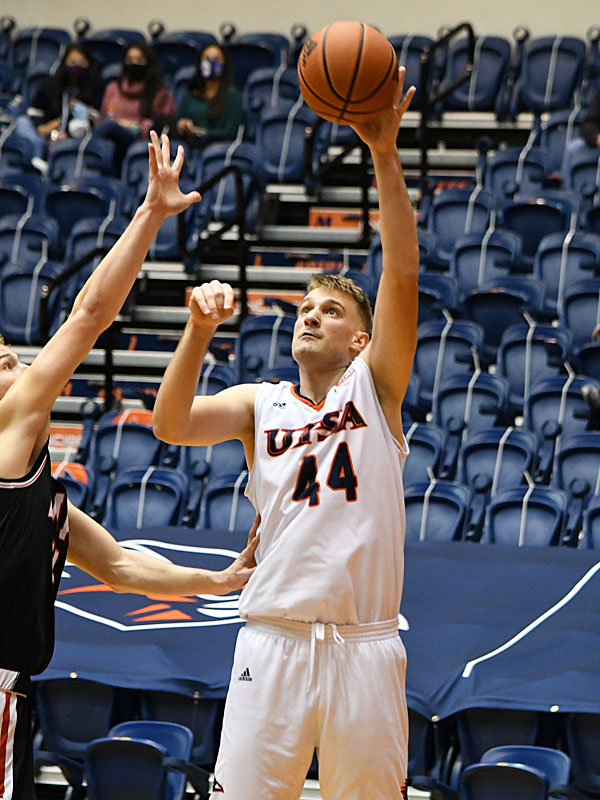 Luka Barisic supplied much-needed early offense by hitting 4 of 8 shots in the first half. He finished 7 of 11 for a career-high 18 points. – Photo by Joe Alexander

After trailing for much of the first half on their home floor at the Convocation Center, UTSA called on its bench to light a spark.

Three international players — Barisic, Erik Czumbel and Lachlan Bofinger — along with a few others made it happen, as UTSA defeated an NCAA Division I program for the first time this season and improved to 4-0 at home.

Taking a three-point lead into the second half, the Roadrunners started to play much better on both ends.

As a result, they routed the Cardinals 54-35 in the final 20 minutes behind 65 percent shooting from the floor.

For the game, the Roadrunners’ reserves hit 15 of 22 afield and outscored the Cardinals, 41-21. 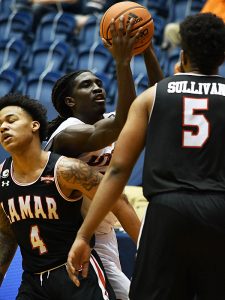 Keaton Wallace missed his first three shots but made four of his last seven to finish with 12 points. — Photo by Joe Alexander

UTSA has a nine-day break before opening Conference USA play at Rice.

The Roadrunners play the Owls on back-to-back days in Houston, on Jan. 1-2, to kick off the conference phase of the schedule.

Luka Barisic, a 6-foot-10 native of Croatia, arrived at UTSA last season as a junior college transfer. After averaging 6.6 points in his first year as a Roadrunner, he entered the Lamar game averaging 7.5. Against the Cardinals, he checked in at 16:57 of the first half, and after missing his first shot, he made his next three to spark the Roadrunners. He finished 7 of 11 from the field, including 3 of 6 from three-point territory.

“I was just feeling good. I made some shots. That raised the confidence. Then, it’s much easier to play.” — Luka Barisic.

Flow of the game

From the opening tip, Lamar played with confidence, as the team shot 50 percent from the field or better for the first 15 minutes. Guard Davion Buster led the way with three 3-point shots.

Several times, the Cardinals pushed the lead to six, the last time with 4:04 remaining before the break.

Keaton Wallace hit his only field goal of the first half with three seconds left, lifting the Roadrunners into a 34-31 lead at intermission.

The shot capped a 12-3 run for UTSA in the final four minutes and created a sense of momentum leading into the dressing room. 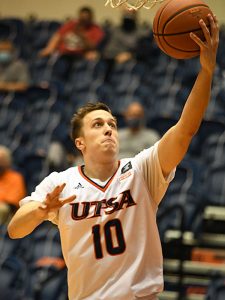 UTSA led all the way in the second half. At one point, the Cardinals pulled within two with 15 minutes left. But the Roadrunners kicked up the tempo and sent the visitors reeling with a 21-7 run, capped by dunks from Bofinger and Jacob Germany.

UTSA led by as much as 25 with less than two minutes remaining.

Steve Henson: “I didn’t think we came out with the kind of fight that I thought we would have. We were pretty energetic at shootaround. We had a good practice yesterday. Our guys just didn’t get off to a very good start. The game itself didn’t have much flow. It was kind of slow. We weren’t getting stops and we couldn’t run … Jhivvan (Jackson) didn’t shoot it well early. That was one of the positives. We were able to play through one of those nights.”

The Roadrunners won by 22 points on a night when Jackson hit only 3 of 13 shots from the floor. It’s a good sign moving forward that the Roadrunners didn’t crater under those circumstances. Instead, they got balanced scoring, including the team-leading 18 points from Barisic, but also Wallace (12), Eric Parrish (11) and Germany (10). Jackson and Czumbel had nine each.