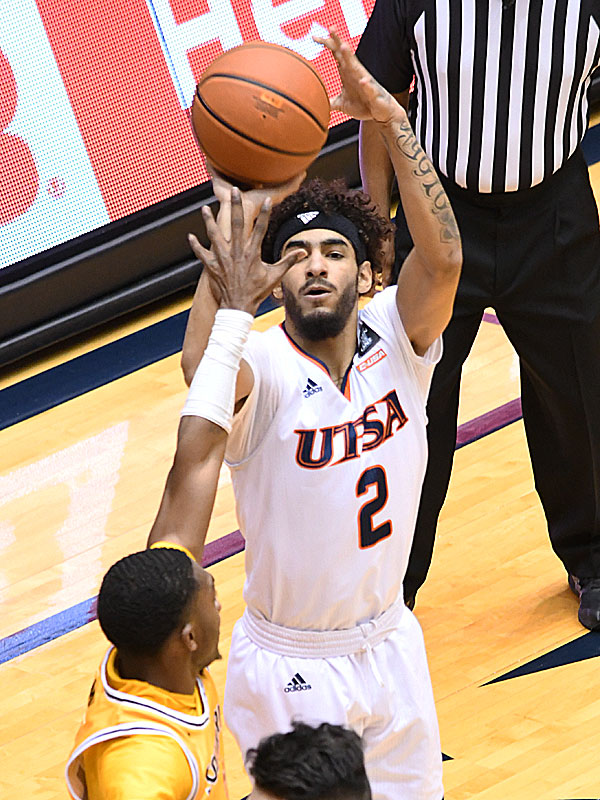 Jhivvan Jackson scored 25 points, including seven in the last two minutes, as UTSA pulled out a victory over Southern Miss. — Photo by Joe Alexander

After downing the Southern Miss Golden Eagles 70-64 Friday night, the UTSA Roadrunners gave themselves a chance to dream of pulling off a compelling first this season.

For the first time, they can win both ends of a two-game, Conference USA series if they can just dig down and do the little things again Saturday afternoon. Game time between West Division rivals is set for 3 p.m. at the Convocation Center. 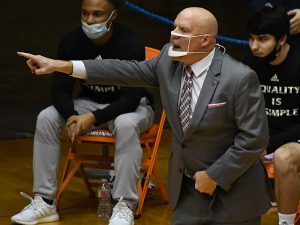 UTSA coach Steve Henson said he felt good about one of his team’s better defensive efforts this season. — Photo by Joe Alexander

UTSA senior Jhivvan Jackson said it would mean “everything” if UTSA could complete the double against Southern Miss.

“Right now, we need every win we can get,” said Jackson, who led the Roadrunners with 25 points. “Our players know that. Everybody knows, we’re last (place) right now. Everybody’s seen it because we got the standings right outside the locker room.

“You know, we’re not a team to be last. We understand that. But, it takes a lot (to win). You know, it takes playing defense.

“I feel like ya’ll get tired of me saying ‘play defense.’ But that’s all that’s stopping us from getting wins. Regardless if we shoot bad, or, we have a bad shooting night, we’re still one of the top offensive teams in the league.

“At the end of the day, we got to come back tomorrow and play better defense than we did today.”

Playing better on the defensive end than they did Friday could be a tall order. The Roadrunners, who, statistically, rank as one of the poorest defensive teams in the C-USA, held the Golden Eagles to 5 of 20 shooting from the field in the first 14 minutes of the game.

Southern Miss, led by guard Tyler Stevenson, ended up making it a very competitive game. What was once a 17-point UTSA lead in the first half was whittled to five at halftime and to one twice late in the second half.

“It was close,” UTSA coach Steve Henson said. “We had an opportunity (in the second half) to pop it open and couldn’t do it … But overall, very, very pleased with our intensity, our fight, our effort. You could see our guys came out with the right mindset in the first half. One of our better defensive games.”

Injured starting guard Erik Czumbel didn’t play for the Roadrunners. As a result, UTSA went with Jackson, Keaton Wallace and Eric Parrish on the wings, with Adrian Rodriguez (in his first start) at one forward and Jacob Germany in the post. Czumbel banged his knee in a collision with another player in practice on Thursday, and it was decided that he wouldn’t play. Henson is hopeful the sophomore from Italy can be ready for Saturday.

“(Czumbel) is one of our toughest guys. He’ll play through anything. He just couldn’t do it. I saw him on my way to do the radio … The doctor looked at him. He’s feeling better every hour. He was moving better after the game than he did earlier today. So hopefully, we can get him back out there … He looked good 15 minutes ago,” Henson told reporters on a zoom conference.

With the victory, the Roadrunners improved to 6-1 at home in the Convocation Center … Jackson hit season highs in free throw makes (11) and attempts (13). His production in both of those categories is down from last year, when he was the nation’s second-leading scorer … Interestingly, history shows that UTSA has been up and down in the first seven games of the C-USA schedule under Henson, whose first year with the program was 2016-17. In his first year, he was 4-3, followed by 2-5, 5-2, 3-4 and now 2-5 again … In 2017-18, the first season at UTSA for guards Jackson and Keaton Wallace, Henson’s Roadrunners bounced back from the 2-5 start to finish 11-7 and tied for second in the conference …

Jhivvan with his 70th career 20+ point game after this floater gives us a five-point lead with 66 seconds left. #BirdsUp 🤙 | #RunWithUs pic.twitter.com/DcS59dpnBo