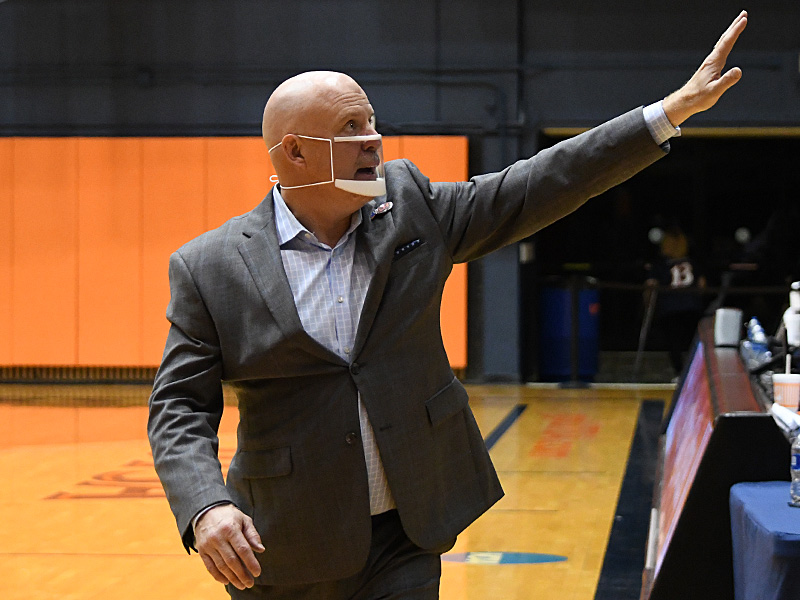 UTSA coach Steve Henson has willed his team to an 8-2 record down the stretch in Conference USA and 9-2 overall leading into the C-USA championships. — Photo by Joe Alexander

High-scoring offense. Capable defense. Positive mindset. The UTSA Roadrunners seem to have everything in order in terms of elements necessary to make a run in the postseason.

They’ll put it all to the test at 5:30 p.m. Wednesday when they meet the Charlotte 49ers in Frisco in the first round of the Conference USA championships. 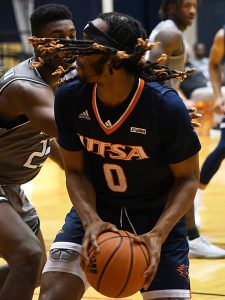 UTSA newcomer Cedrick Alley Jr. has emerged as a defensive stopper and a capable perimeter shooter during UTSA’s 9-2 streak. — Photo by Joe Alexander

One of the best things going for the Roadrunners right now is momentum — they’ve won 9 of their last 11.

“Everybody’s going to head to Frisco with a different speech for their guys,” UTSA coach Steve Henson said on a zoom conference Monday morning. “But, yeah, in a perfect world you need to be healthy. You need to be fresh. Guys still need to enjoy being around each other. We’ve felt that with our guys.

“For the last two weeks, with the exception of Adrian (Rodriguez) we’ve been pretty healthy. I mean, very healthy.

“There’s some guys constantly getting treatment, trying to stretch out, but we’re in pretty good shape physically,” Henson said. “We’re playing better basketball. We’ve won 9 out of 11. Confidence is high. Spirits are high. Our expectations are high. That’s really what you want when you head into conference tournament play.”

UTSA enters the tournament as the No. 4 seed in the C-USA West. Charlotte is No. 5 in the C-USA East. Henson said he knows what 49ers coaches are telling their players.

“Charlotte is a much better team than what they’ve shown in the the last six ball games,” he said. “So they’re talking to their guys about a fresh start. They played well against Marshall (in the) second game (last weekend). They’re on a clean slate, ready to play better basketball. But I like where we’re at, and that’s what we’re concerned about right now.” 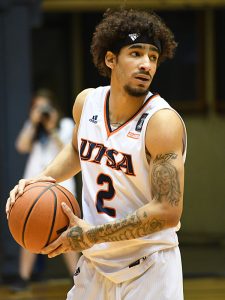 Jhivvan Jackson led the C-USA in scoring at 20.7 points per game en route to first-team, all-conference honors for the third straight season. — Photo by Joe Alexander

For the 49ers, the task will center on slowing a Roadrunners’ offensive attack that has averaged 82.5 points in its last 11 games. Led by guards Jhivvan Jackson and Keaton Wallace, UTSA is shooting 47.9 percent in that stretch.

“It’s such a good feeling, knowing that everybody can step up at any moment,” Rodriguez said. “What I enjoy the most out of that, is that we all trust each other. You know, we trust each other to make that extra pass. To give the ball to the man that’s open. Whenever we need it. And everybody makes plays. The right plays. Especially recently. The most recent games.

“The ball movement is beautiful. With great shots. That shows that you can trust each other.”

Coming off a knee injury, Rodriguez played 16 minutes last week against Southwestern Adventist and is expected to be ready to play against the 49ers.

If the Roadrunners win Wednesday, they would advance to Thursday’s quarterfinals against the Western Kentucky Hilltoppers. Western Kentucky, featuring 6-foot-11 center and former San Antonio schoolboy Charles Bassey, is the No. 1 seed in the C-USA East.

Two victories would send the Roadrunners into Friday’s semifinals against either the UAB Blazers, the Marshall Thundering Herd or the Rice Owls. Rice won Tuesday on opening night, eliminating Southern Miss, 61-52. 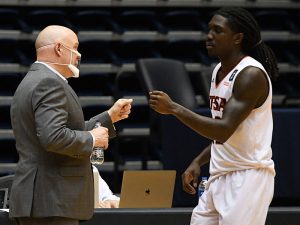 Senior Keaton Wallace goes to the bench in the second half last Thursday in the Roadrunners’ final home game. Wallace enters the postseason averaging 16.1 points, 5.5 rebounds and 3.4 assists. – Photo by Joe Alexander

The Thundering Herd and the Owls will play Wednesday at 6 p.m., with the winner moving on to the quarterfinals to meet the Blazers, the No. 2 seed in the C-USA West Division.

The semifinals are set for Friday and the finals on Saturday.

Western Kentucky, UAB (No. 2, West), Louisiana Tech (No. 1, West) and Old Dominion (No. 2, East) all have byes into Thursday’s quarterfinals, meaning that each would need to win three games in three days to win the tournament. Teams playing on Wednesday, like UTSA, would need to win four games in four days.

In the C-USA, the seventh-seeded Houston Cougars in 2010 were the last team to win four times in four days to earn the conference’s automatic bid to the NCAA Tournament.

Since then, three teams seeded outside the top four (Middle Tennessee in 2015, Old Dominion in 2016 and Marshall in 2017) have won three games to play in the C-USA finals. Each one of them ran out of steam and lost in the championship game to a team that only had to win twice to get there.

In a zoom interview Monday, Wallace said he thinks the Roadrunners have enough depth on the roster to win four games this week. “Most definitely,” he said. “We have confidence in all our teammates. Recently, we’ve been probably like eight-nine (players) deep in our rotation. Everybody plays their part. Everybody chips in. We’ve had a lot of success the last few games, so we expect to keep that going.”

NCAA tournament selections will be announced on Sunday. At the moment, two prominent media projections have installed Western Kentucky as the only C-USA team to make the NCAAs. Jerry Palm of cbssports.com projects the Hilltoppers as a No. 12 seed. ESPN’s Joe Lunardi has penciled them in as a No. 13 seed.