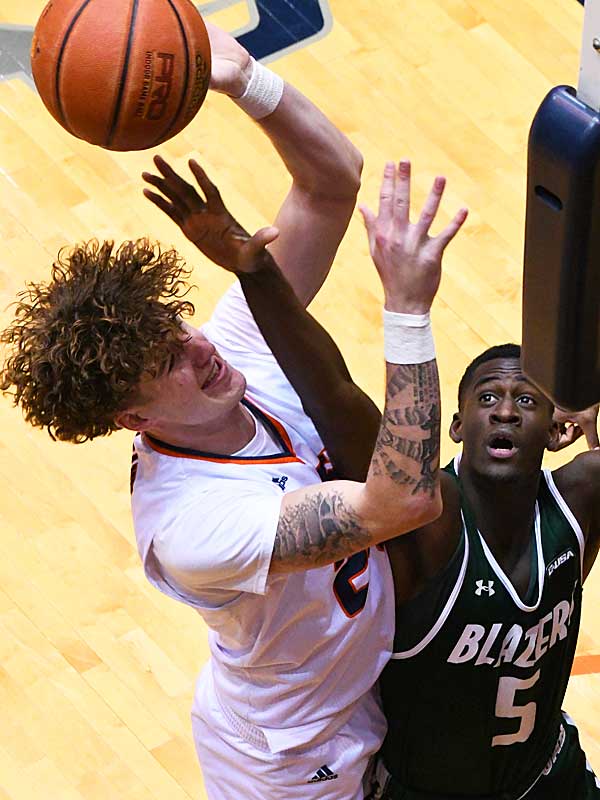 Expectations are high for sophomore center Jacob Germany as UTSA opens the season Wednesday night at the University of Oklahoma. — Photo by Joe Alexander.

Who says a kid from a small town in Oklahoma can’t learn how to become a man of the world?

Jacob Germany is doing just that after spending only one year in the UTSA basketball program. 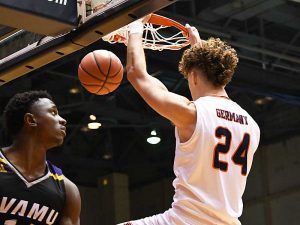 “One of my roommates (Erik Czumbel) is actually from Italy,” Germany told a television reporter over the summer. “He’s teaching me Italian on the low. That’s fun.

“It’s crazy to see the different cultures on the team and see how basketball can bring other cultures together.”

Not only is Germany growing as a person, he’s made significant strides on the hardwood, as well.
The 6-foot-11 sophomore from Kingston, Okla., is emerging as the type of impact player in college that was expected of him after leading his high school to the Class 3A state title in 2018-19.

“Jacob’s doing great,” UTSA coach Steve Henson said. “He gained some weight. Gained some muscle. You know, he’s so talented. It’s amazing the things he can do that look so easy. 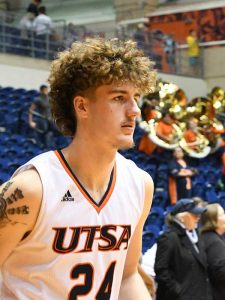 “We’re just trying to get him to go harder, play with energy, fly around. He’s literally the fastest guy on the team, on turf, in 20-yard sprints. He’s an amazing athlete.

“We’re just trying to get him to play hard every single possession.”

The Roadrunners open the season Wednesday night in Germany’s home state, at the University of Oklahoma.

Fans at OU will see a different athlete than the one that led Kingston to a 28-2 record a few years ago.

He’s packed on about 20 pounds, which, along with the 31 games he played last year, has added an entirely different dimension to his game.

Adding more to his game

“With Jacob, the big thing for him is experience,” UTSA assistant Scott Thompson said. “You know, playing at our level last year was so important for him.”

Reports out of the weight room suggest that he has also emerged as one of the strongest players on the team.

“He’s a guy that’s benefited so much from coach (Christian) Wood’s strength program,” Thompson said. “His body continues to change. He’s been up to 234, I think, at one point. For his length and height, to be able to run and move like he does, you know, is unbelievable.

“This offseason, he spent a lot of time working on his ball skills. I think you’re going to see him score a lot more in the paint. Facing up at 10 and 12 feet, he’s shooting his jumper so much more consistently.”

Germany averaged 5.5 points and 4.5 rebounds last season, but he showed last week that he is capable of more, contributing 24 points in an intra-squad scrimmage at UTSA.

“The game is so easy for him,” UTSA forward Adrian Rodriguez said. “He’s so big, so athletic, all you have to do is throw it up (for him). When he jumps, there’s not much else anybody can do.”

Kingston coach Taylor Wiebener said it was “a lot of fun” to coach Germany in high school.

“To be able to put a 6-10 or 6-11 guy on the floor, you know, there’s not a lot of high schools around here able to do that,” he said Monday in a telephone interview. “Throw on top of that, (that) Jacob is very skilled for a big man (and) he moves around so well. So, that was kind of icing on the cake.

“We felt good having him on the floor, just protecting the rim, and (scoring), as well. I mean, Jacob was fun to coach.

“Early in his career, I made it basically my mission to try to make him tougher, because he had the tools … But,the one thing he was going to have to have, was some toughness.”

Basically, Wiebener tried to get maximum effort out of his lanky center.

‘In the gym constantly’

“That was kind of our goal,” Wiebener said. “He took care of a lot of the fundamental skills on his own. He was a gym rat. I mean, he was in the gym constantly, working on things. So that part, we didn’t have to worry about.”

Initially, Wiebener didn’t know what he had in Germany, who was about 6-foot-5 as a high school freshman.

“Honestly, he was a little awkward,” Wiebener said. “Like, eighth and ninth grade, he was tall (and) real skinny. Kind of awkward. So I said, ‘He’s fixing to stop growing pretty quick.’ But, every summer … I wouldn’t see him, (and when) he’d come back, it seemed like he’d grown another 2-3 inches.

Coaching Germany at the high school level was an adventure in terms of trying to get him to add weight, Wiebener said.

“I remember his sophomore or junior year, we had been on him about it,” the coach said. “I told him, ‘Your dad is a chef. You’re the only kid I know that, your dad’s a chef, and you’re as skinny as you are.’ Once he hit that 200-pound mark, that was kind of a milestone for us.”

As a junior, Germany used the added strength in leading Kingston to the state finals.

He also saw his name rise on the prospect lists. As a senior, Germany paced his team all the way to the title, producing 21 points and 12 rebounds in the 3A championship game.

Another challenge for him as he entered college last year came in adjusting to the speed of the game.

Because the Roadrunners play at a tempo that is rated as one of the fastest in NCAA Division I, Henson’s players need to have the ability to run well and run hard for sustained periods of time.

By the end of last season, Germany was picking it up on that front. He had gained a better feel for everything, really, and as a result, he was able to move into UTSA’s starting lineup.

Now, he wants to take another step as he starts his sophomore year.

“All around, really, I’ve been putting on some weight,” he said Monday on a Zoom conference call. “I’ve been working on my motor. Going (hard) all the time. Not taking plays off. Just being that energetic guy that the coaches want me to be.

“That’s really where I’ve stepped up.”

Growing as a person

Asked how his Italian language skills are coming along, he shrugged and said he’s made “very little” progress along those lines.

During the offseason, Germany said he worked out at a gym at his church back home in Kingston, a town of about 1,700 people nestled near Lake Texoma, just to the north of the Red River in southern Oklahoma.

He worked on some moves on the court, but, mainly, he said he worked on his mental game.

“It was hard being a freshman and everyone expected me to do all this stuff,” he said. “Especially being from a small town, coming to this big, big city … Especially coming from a small school where there’s not so much competition.

“There was a lot of pressure on me last year. If I did anything bad, I would get really mad. I wouldn’t necessarily show it. But, like, I had real bad anger issues. Over quarantine I was able to grow mentally and mature a little bit.”

Germany, who started 10 games at the end of last season, is expected to start in the post for the Roadrunners against the Sooners.

Alongside Germany, the others in the first five are expected to include Cedrick Alley Jr. at a forward position, plus Jhivvan Jackson, Keaton Wallace and Eric Parrish at guards.

Jackson and Wallace formed the highest-scoring backcourt duo in the nation last year. Parrish and Alley are transfers playing in their first games for UTSA.

“Our expectations of him are so high, higher than he has of himself, even,” Henson said. “Every now and then, we’ll think, ‘He didn’t have the greatest practice.’ And then we’ll look and (we ask), ‘What did he look like a year ago? (The difference) is phenomenal, (in) the improvement he’s made.

“So, the sky’s the limit for him. He’s just barely scratching his potential.”