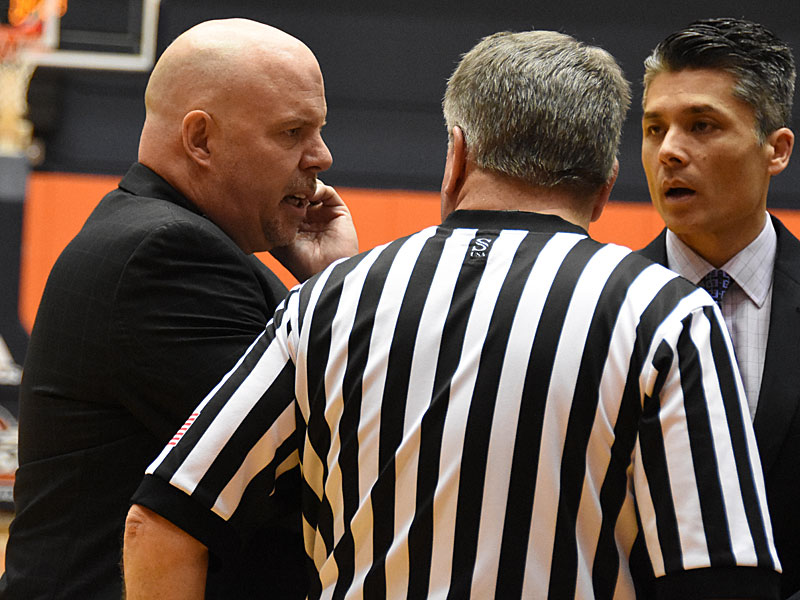 Steve Henson (left) speaks with a referee on the sideline last weekend during a game against Southeastern Oklahoma. Assistant coach Mike Peck (right) listens in. – Photo by Joe Alexander”

Last year, the UTSA Roadrunners set out on a nightly basis to push the pace and shoot the 3-pointer.

Even if the long ball was hoisted fairly early in the shot clock, that was OK, because they had enough threats to run and hoist field goal attempts with just about anyone.

And with just about any degree of difficulty.

As UTSA enters Conference USA play tonight, hosting the UTEP Miners at 7 at the Convocation Center, the Roadrunners have established a different mindset.

Jhivvan Jackson and Keaton Wallace are expected to fire away, as usual, but the Roadrunners have evolved into more of a team based on defense.

UTSA has held eight straight opponents to 42 percent shooting or less during a 6-2 streak that has given the team hope after an 0-5 start.

“Guys are practicing the right way, buying into it,” UTSA coach Steve Henson said. “We have five guys who have played a lot, so it wasn’t shocking that we’d end up being a good defensive team.”

Even the younger players have developed a good grasp on what is expected of them on a daily basis.

“Again, that was the thing we had to work through. Who are we? What gives us the best chance to win? Is that 90 possessions a game? Or is it being a great defensive team?

“We’ve gone along here and recognized that we’ve got to defend every single night.”

UTSA and UTEP will play back-to-back games to open C-USA play, a byproduct of a revamped scheduling system within the conference. The teams will meet again Saturday night in El Paso.