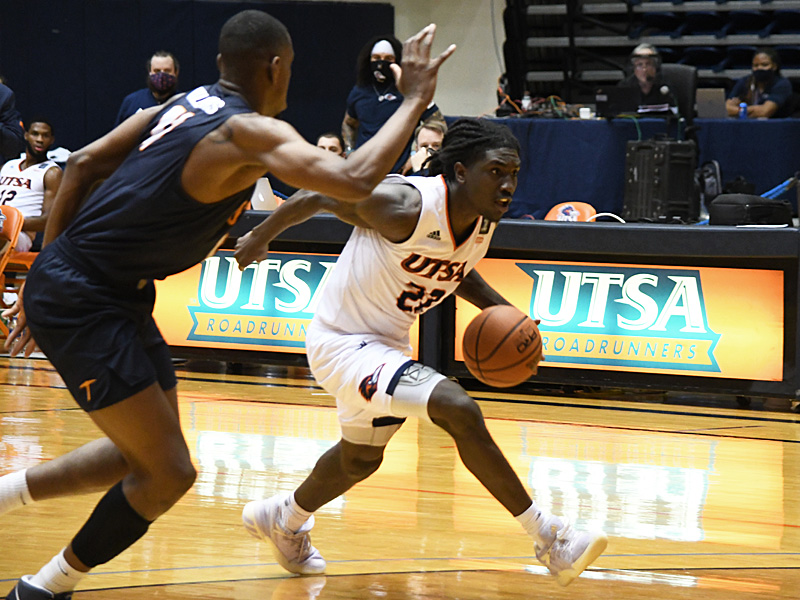 Senior guard Keaton Wallace will lead the UTSA Roadrunners into a weekend home series against the FAU Owls. – Photo by Joe Alexander

Senior guard Keaton Wallace says he was oblivious to the news last weekend that he had passed a former UTSA great and moved into second place on the school’s all-time scoring list.

“It’s really crazy, because I never knew until I came in on Monday … ” Wallace said. “They told me that I was second. I was shocked. I didn’t even know.”

For the record, Jhivvan Jackson leads the UTSA list with 2,411 points, followed by Wallace, Jackson’s teammate of the past four years, with 1,944, and Devin Brown with 1,922.

Brown, a shooting guard, amassed his point totals from 1998-2002 and went on to play in the NBA. He held the record for 18 seasons until Jackson broke it late last year.

Wallace eclipsed Brown’s mark last Friday when he scored a season-high 33 points in an 87-80 victory at Florida International. The former prep standout at Richardson added to his career total with 16 in a 90-47 victory at FIU on Saturday.

“You know, things like that don’t happen very often,” Wallace said. “Devin Brown, he’s a great player. I seen some of his tape. He could score. Just for two guys, me and Jhivvan, to play on the same team at the same time and do things like that, that’s big time. That speaks volumes. I’m going to keep working. Try to keep getting better.”

As Wallace works on his own game, the Roadrunners are also improving as a team. They have won five of their last six leading into a two-game, Conference USA home series this week against Florida Atlantic. The games are set for Friday at 6 p.m. and Saturday at 3 p.m. at the Convocation Center.

If Wallace has learned anything in four years at UTSA, he knows it’s nice to start playing well in February, to lay the groundwork for a trip to the C-USA tournament in March.

UTSA is emphasizing perimeter defense against the Owls.

“I think we need to guard the three a little bit better,” he said. “I know they have a couple of three-point shooters, things like that. If the defense is all on the same page and we execute our schemes, make sure we don’t give up any offensive rebounds or any second-chance points, we’ll have a better chance at winning the game.”

Having Wallace at peak form also will help. Last weekend, with UTSA facing games critical to its long-term aspirations, the 6-foot-3 left-hander hit 12 of 19 from the field on Friday and 6 of 13 on Saturday.