Freshman guard Alijah Martin scored 13 of his 16 points in the second half Saturday afternoon as the FAU Owls rallied for a 73-64 victory over the offensively-challenged UTSA Roadrunners.

Martin and Bryan Greenlee, who also scored 16, hit key shots in an 8-0 run for the Owls in the final three minutes of the ball game at the UTSA Convocation Center. 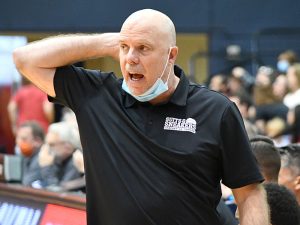 During the Owls’ final push, the Roadrunners had several opportunities to turn the momentum in their favor but couldn’t get it done.

After leading by three at halftime, the Roadrunners shot 25.6 percent in the second half and finished with 33.8 percent for the game. As a result, their percentage for the season dropped to 38.0, which ranks last in Conference USA.

Down by nine points with six minutes remaining, the Roadrunners started a charge that felt a little like Thursday night, when they rallied for a victory over the FIU Panthers.

UTSA, behind guard Darius McNeill, surged on an 11-3 streak over the next three minutes.

McNeill had seven points and an assist in the run. His jumper from just outside the paint brought the Roadrunners to within one, 65-64, with 3:18 remaining. 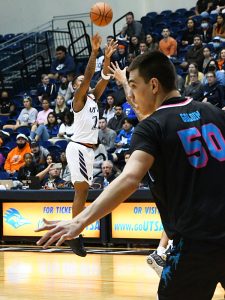 At that point, the Roadrunners couldn’t get a break or score another point for the rest of the afternoon.

After McNeill misfired on a three-point attempt that would have vaulted UTSA into the lead, FAU came down and missed on a Greenlee drive.

A clutch offensive rebound by forward Bitumba Baruti allowed the Owls another opportunity, and Greenlee delivered on a three from the wing that made it 68-64.

As the clocked ticked into the two-minute range, defenses tightened and both UTSA and FAU misfired on three-point attempts. Trailing by four, UTSA would have a chance.

But in one of the key sequences, the Roadrunners made an aggressive play that could have been a momentum changer, only to see it go awry.

Guard Dhieu Deing drove baseline and passed on a difficult maneuver under the basket to teammate Jacob Germany. As it turned out, the pass was low, and Germany couldn’t hang on to it. 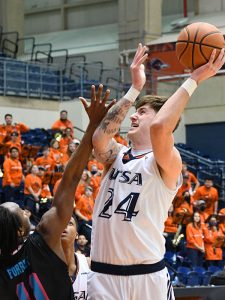 The Owls advanced it the other way, leading to a driving layup by Martin and a 70-64 lead for FAU with 56 seconds left.

On the next possession, the Roadrunners kept shooting and rebounding and shooting again, coming up with nothing as they skidded to their 10th loss in their last 12 games.

The Owls clearly had something to do with the Roadrunners’ problems. Unlike the Roadrunners, the Owls had several players who looked confident in their offensive games.

Martin, for instance, hit six of 10 from the field. He also nailed four of eight from 3-point territory. In an all-around solid performance, the 6-2 guard from Summit, Miss., was a handful on the glass with nine rebounds. He also passed for four assists.

Greenlee hit the big three at the end.

Junior guard Michael Forrest, FAU’s leading scorer, wasn’t great. He hit only two of six from the field and scored 12 points. But he stepped up and contributed in other areas. He knocked down seven of eight of his free throws, leading a 22 of 26 showing at the line for the Owls.

Freshman guard Johnell Davis led the Owls off the bench. The 6-4 freshman had 15 points and six rebounds.

Walk-on forward Isaiah Addo-Ankrah buries a 3-pointer late in the first half for the UTSA Roadrunners. https://t.co/hyCDEtJ4sq pic.twitter.com/0QhYklqYfh

UTSA hit two three-pointers in the final minute of the first half to take a 38-35 lead. In the second half, the shots didn’t fall. The Roadrunners made only 10 of 39 for 25.6 percent after halftime. They hit 33.8 percent for the game.

Jordan Ivy-Curry led UTSA with 19 points. But after playing 34 minutes on Thursday, Ivy-Curry didn’t seem to have quite the lift on his jumpers. He hit only seven of 24 from the field.

Germany, who played 35 minutes Thursday, was 5 of 11 from the field and scored 11. He had 10 rebounds. Dhieu Deing suffered a tough day in hitting only three of 14 shots. He scored eight points.

This is why they call him ' Juice.' Jordan Ivy-Curry banks in a long three at the halftime buzzer. With back -to-back threes from Addo-Ankrah and Ivy-Curry, the UTSA Roadrunners take a 38-35 lead on the FAU Owls at intermission. https://t.co/hyCDEtJ4sq pic.twitter.com/ECmZOApvJr