Rejuvenated by the return of two of their best players, the UTSA Roadrunners will attempt to complete their first Conference USA sweep of the season when they host the FAU Owls Saturday at 1 p.m. at the Convocation Center. 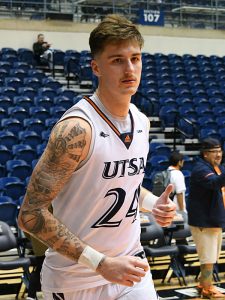 After playing 35 minutes Thursday night, UTSA center Jacob Germany will be tested in a quick turnaround as the Roadrunners host the FAU Owls Saturday afternoon. – File photo by Joe Alexander

UTSA’s zone defense held FIU to 26 percent shooting in the first half. After intermission, the offense started to percolate, with the Roadrunners hitting five 3-pointers.

Dhieu Deing hit three of those shots from long distance, a hopeful sign for an offense averaging a C-USA low 67 points.

In January, UTSA played most of the month without Deing and Jordan Ivy-Curry. With both back in the lineup, Jacob Germany was freed up to score 23 points, while Deing had 19 and Ivy-Curry 17.

Now it’s time to see if the team can generate the same level of performance after a quick turnaround.

A night game on Thursday, followed by a 1 p.m. tipoff on a Saturday, will test the Roadrunners’ conditioning and depth.

Deing had been away from the team for a little more than three weeks, in limbo while weighing whether he wanted to re-join the team. Ivy-Curry had been out for two weeks in Covid protocols.

FAU will enter the game under challenging circumstances, as well. The Owls’ itinerary this week included a flight from their Florida home all the way to El Paso, where they played and lost 70-68 to UTEP Thursday night.

After traveling to San Antonio, the Owls hope to hit a few more shots against the Roadrunners than they did against the Miners.

Based on their track record, a breakout is possible. As one of the better offenses in the conference, FAU has averaged 74.8 points on 46 percent shooting.

The Owls have knocked down 180 three-point shots, led by guards Michael Forrest and Alijah Martin.