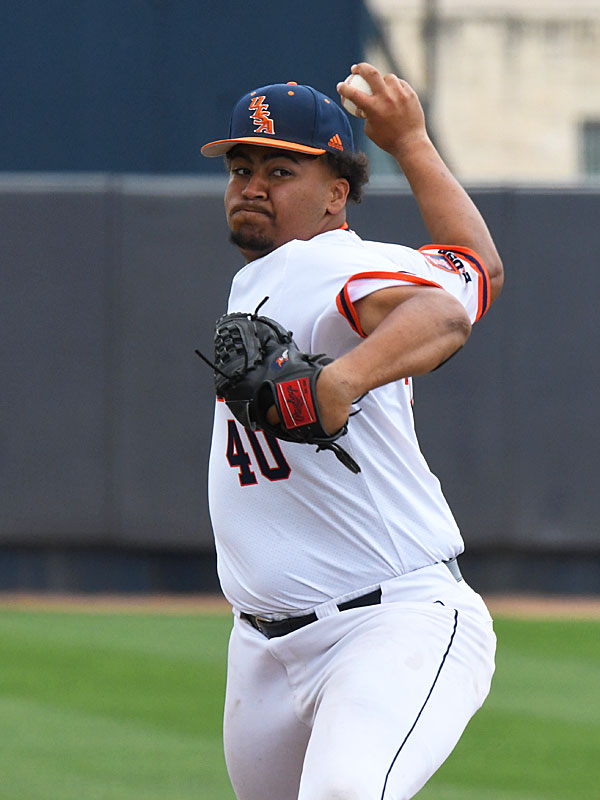 Braylon Owens, a 6-foot-2, 230-pound righthander from Elgin, improved his record to 2-1 on the season as UTSA downed the FIU Panthers 9-8 at Roadrunner Field. – Photo by Joe Alexander

Freshman Braylon Owens pitched 2 and 2/3 innings of scoreless relief on Sunday as the UTSA Roadrunners rallied to win 9-8 and complete a three-game Conference USA sweep of the Florida International Panthers.

Owens entered the game in the seventh inning. He allowed three hits and walked one, but he also made some big pitches in striking out two for the Roadrunners, who improved to 27-13 on the season and to 12-6 in the C-USA.

Jonathan Tapia delivered a solo home run and Ryan Flores added an RBI in the bottom of the seventh as the Roadrunners forged an 8-8 tie. After Owens held FIU scoreless in the top half of the eighth, UTSA made it 9-8 in the bottom half on a Garrett Poston RBI single.

Owens retired three straight in the ninth to nail down the victory, which improved UTSA’s record to 14-3 over its last 17 games. The Roadrunners are 10-2 in their last 12 in C-USA play.

Southern Miss leads the conference standings at 16-2, with UTSA and Louisiana Tech tied for second at 12-6. Florida Atlantic and Middle Tennessee tied for fourth at 11-7.

UTSA has a tough week ahead, hosting nationally-ranked Texas State on Tuesday and then traveling for a weekend series at Middle Tennessee.