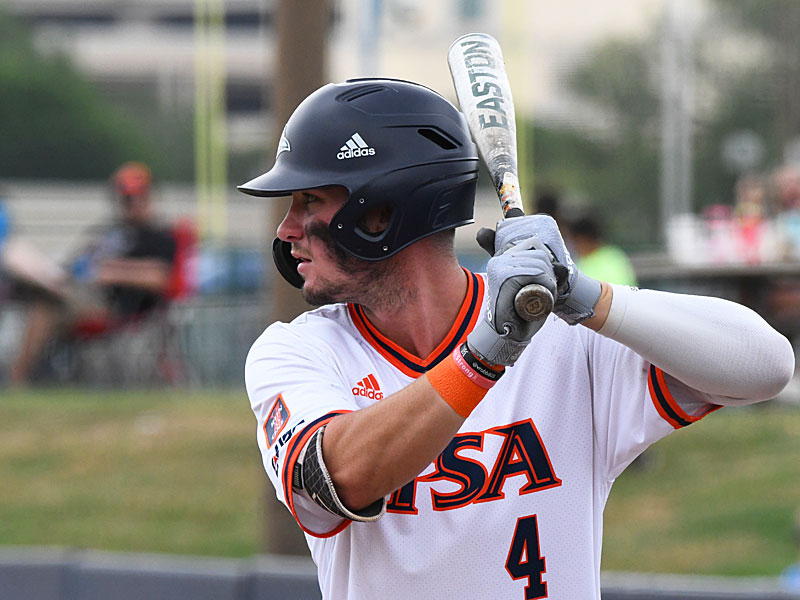 Chase Keng has emerged as one of UTSA’s hottest hitters. He’s averaging .387 with six doubles, a triple and two homers during the Roadrunners’ recent 14-3 surge.- Photo by Joe Alexander

UTSA and Texas State, two old rivals with designs on reaching the NCAA baseball tournament, will meet tonight at 6 at Roadrunner Field.

Both enter the game on hot streaks, with the Roadrunners riding a 14-3 surge in their last 17 games, while the Bobcats have won nine straight. Texas State is 12-3 in its last 15.

The two programs separated by about 50 miles of interstate highway played for the first time in two years last week in San Marcos, and Texas State held off UTSA 14-12 despite the Roadrunners rallying for seven runs in the ninth inning.

Last weekend, both teams swept three-game series at home within their own conferences, with Texas State (32-9) blitzing the Little Rock Trojans in the Sun Belt and UTSA (27-13) rolling past the FIU Panthers in Conference USA.

This week, Texas State is ranked anywhere from No. 7 to No. 20 in the polls.

UTSA is unranked except that it is receiving votes in the National Collegiate Baseball Writers poll. In the NCAA ratings percentage index, Texas State is 47th and UTSA 58th.

Texas State leads the series against UTSA, 61-37. The Bobcats have won two straight off the Roadrunners and four of the past five.

The Bobcats and Roadrunners played in the same conference for most of the three-decades old rivalry, first in the Southland and for one year in the Western Athletic Conference.

In the 2014 season, the Bobcats started play in the Sun Belt, while UTSA linked with Conference USA. Over that period of time, Texas State has won 10 of the 18 games overall, but UTSA has won five of the eight meetings held in San Antonio.

The Bobcats and the Roadrunners have played in separate conferences since the 2014 season. Here are the results of their games since then:

Texas State wins 6-0 at San Antonio on May 3