Looking to bounce back from a dispiriting road loss, the UTSA Roadrunners on Tuesday announced a not-so-minor adjustment to their schedule, unveiling a plan to play on the road Thursday night at the University of Oklahoma. 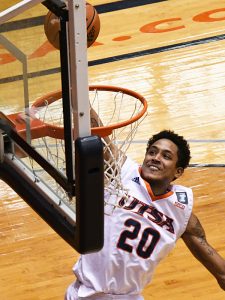 The wrinkle sets up back-to-back games for the Roadrunners for the second time in two weeks, as they return home Friday night to meet the Division III Sul Ross State Lobos.

In most years, back-to-back games are rare unless they are played at neutral sites with multiple teams involved. But this isn’t any ordinary year. UTSA junior Eric Parrish said it’s all part of trying to get a season going during the coronavirus pandemic.

“With them extending the season to us, we’re grateful,” Parrish said. “We’re grateful for each game that we’re able to go lace ’em up.”

Last week, UTSA was scheduled to open its season at OU. But the game was called off because of Covid-19 issues in the Sooners’ program, forcing the Roadrunners to scramble travel plans and take a bus ride back to San Antonio on Wednesday, the day before Thanksgiving.

It all set up a two-game, season-opening test last Friday and Saturday.

On Friday afternoon, the Roadrunners played well and blew out the Division II UT Permian Basin Panthers, 97-71. That night, they took a five-hour bus ride to Edinburg, where they would spend the night in preparation for a Saturday afternoon game at UT Rio Grande Valley.

The Division I Vaqueros were ready and waiting for them. Forcing UTSA into a slow pace, UTRGV pounded out an 81-64 victory, leaving the Roadrunners in a bit of a funk for a good 48 hours. UTSA coach Steve Henson said players responded with enthusiasm Monday afternoon when it looked like they would get to play the OU game this week.

“It was kind of a cool deal yesterday,” Henson said. “We had a long meeting to recap the disappointments from Saturday. We had a good team meeting and had ’em speak in that meeting. When the meeting was over, I asked ’em if they had anything going on Thursday night.

“They kind of looked at me funny. I said, ‘Let’s go play Oklahoma then.’ They were pretty fired up. I think the opportunity to play an exciting game and get that taste out of our mouth, was a pretty exciting situation for our guys.”

Henson said he expects Jhivvan Jackson will be back in the starting lineup Thursday night at Oklahoma. Jackson came off the bench in his first game of the season Saturday at UT Rio Grande Valley.