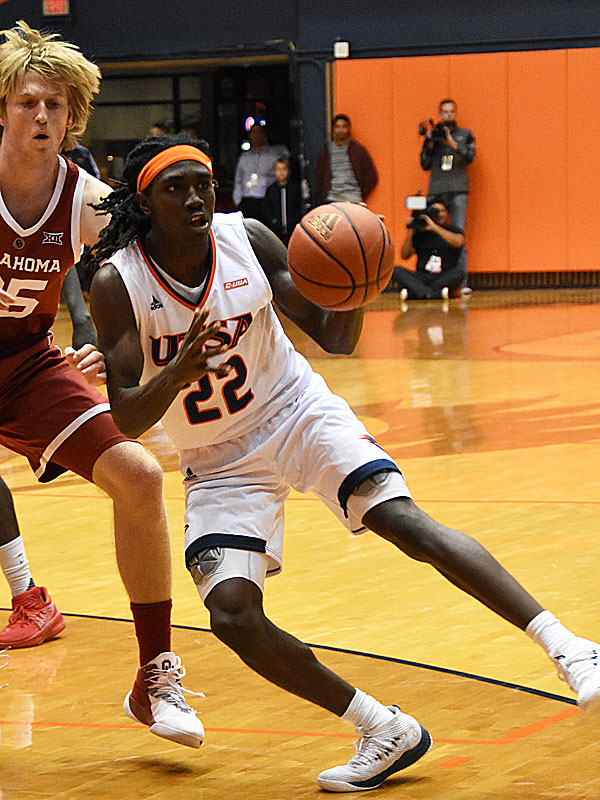 UTSA’s Keaton Wallace looks to pass in a game against Oklahoma, played two years ago at the Convocation Center. — Photo by Joe Alexander

In a little more than four seasons under Coach Steve Henson, the UTSA Roadrunners have created their share of magical moments with victories over some of the best teams in Conference USA.

The Roadrunners have won games against the likes of Marshall, Western Kentucky and Old Dominion. In the past three seasons, they’re a combined 29-25 in the C-USA regular season.

But in games played in November and December, it’s been tough sledding for UTSA against teams that it would like to beat to boost its national profile.

In games played against teams from the major, revenue-producing conferences, the Roadrunners are 0-9 under Henson leading into tonight’s road test at Oklahoma of the Big 12.

“We’re always going to try and schedule a few of those games,” Henson said. “It’s fun for our kids. … Going to Oklahoma, you know what to expect from a style-of-play standpoint. And vice versa, they know we’re not going to come in there and hold the ball on ’em and try to work the clock, things like that. You want to set up some good matchups in the non-conference.”

UTSA plays most of these games on the road for the financial reward. But, in most cases, UTSA’s opponent has been pushed to the brink before it finishes off the victory.

“It’s always a good measuring stick for us and also prepares us. We want to learn from these opportunities. We’ve played well in stretches against a lot of these opponents. (Against) Oklahoma, Nebraska, Arkansas — there were some stretches fairly deep in the ball game in second half when we were right there in it.

“We just haven’t found a way to finish it off and get a win yet.”

Here’s a list of UTSA’s games against the ‘majors’ under Steve Henson:

In 2016, lost by eight at Oregon State — The Roadrunners surprised the Beavers by rolling to a lead of 10 late in the first half. After intermission, the Beavers surged to regain control of the game, but the Roadrunners hung around to within two possessions for most of the second half. With 3:30 remaining, Giovanni De Nicolao hit a three to bring UTSA to within one point. But Oregon State held UTSA without a field goal on a 9-2 run the rest of the way.

In 2017, lost by 12 at Oklahoma — The Roadrunners unleashed freshman guard Jhivvan Jackson, who opened eyes by outscoring heralded Sooners freshman Trae Young, 31-28. UTSA was within five at halftime and within two with 16 minutes left, but OU blew it open with a 25-11 run over a five-minute stretch to take charge.

Also in 2017, lost by 10 at Nebraska — UTSA hit 15 three-point shots in the game and scored 52 points in the second half. The game was tied with 4:23 left when Jackson hit a three. But Nebraska constructed a 9-0 run to put down the upset bid.

In 2018, lost by 12 to Arkansas — The Roadrunners stayed close for three quarters of the game at North Little Rock against the cold-shooting Razorbacks. Midway through the second half the Roadrunners went on an 11-2 run and assumed a four-point lead with 9:07 left. But the Razorbacks closed strong behind Jalen Harris and Daniel Gafford.

In 2019, lost by 10 to Oregon State — In a game played at Houston in the Toyota Center, the Beavers were blowing out the Roadrunners, pushing the lead to 16 points early in the second half. But UTSA retaliated behind Jackson to outscore OSU 26-16, dropping the lead down to six. It was still a six-point game with 6:45 left before the Beavers held off the Roadrunners to the final buzzer.

UTSA’s last victory over a team from one of the five major revenue producing conferences came on Nov. 15, 2009, when the Roadrunners registered a 62-50 upset on the road against the Iowa Hawkeyes. Since then, UTSA has lost 21 straight against teams from a group including the Big 12, the Pac 12, the SEC, the ACC and the Big Ten. The drought covers 22 games if you count a 2015 loss to Creighton, from the Big East. The Big East is the NCAA’s pre-eminent, basketball-led powerhouse, albeit one that does not play major-conference football.