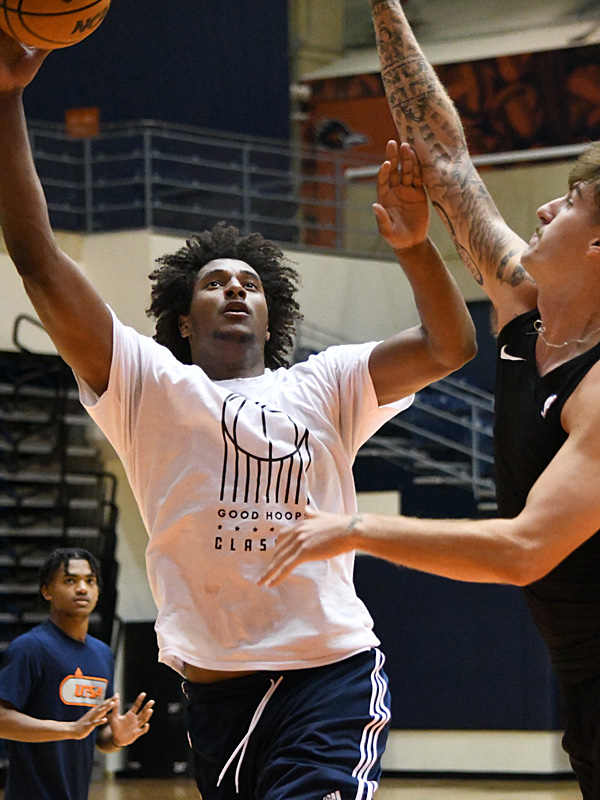 UTSA freshman Massal Diouf, from The Netherlands, played well Wednesday afternoon in a series of informal pickup games at the Convocation Center. – Photo by Joe Alexander

Acknowledging a “bad taste” left over from a disappointing 10-win season, seventh-year UTSA basketball coach Steve Henson has expressed guarded optimism about his latest work-in-progress, a squad buoyed by senior center Jacob Germany, an infusion of backcourt talent and a feeling that the group is pulling together as one. 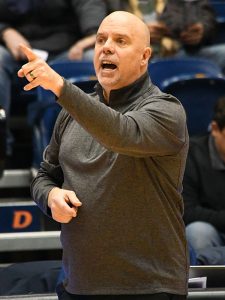 Seventh-year UTSA basketball coach Steve Henson says he likes the feel around his program, with everyone pulling together. – Photo by Joe Alexander

Henson didn’t mention the word redemption. But he said he hasn’t been as hungry or as excited to win since he took the UTSA job in 2016. “You have to turn the page, just move on (and) get that bad taste out of your mouth,” the coach said in an interview at his office on Tuesday.

Derailed by adversity, including injuries, Covid-19 disruptions, a senior starter lost to academics and issues related to key scorers who couldn’t stay on the same page with the coaches, Henson’s sixth team at UTSA finished 10-22 overall and 3-15 in Conference USA.

It was a humbling experience for the coach, who had guided the Roadrunners to winning seasons in three of the previous four years, including a 20-win season in 2017-18.

“Going back and watching some of those games (from last year, on tape), it doesn’t get any better three, four, five months later,” he said. “It was frustrating to see us play that way. So, there’s that motivating factor.”

The other primary motivation is a new collection of players that Henson really likes.

“Eight or nine weeks (in the summer) with these guys, with one week off in the middle, they’re just so enjoyable to be around,” the coach said. “They come to the office. They enjoy each other. They have a good time.

“They work. They invest. They put the time in. The energy level is terrific with this group.”

The Roadrunners reeled in five new players last spring, and two of them could take on starters’ roles and significant playing time when the season tips off in November.

Junior guards Japhet Medor and John Buggs III have shown promise. Medor, a 5-foot-11 Floridian with quickness and an ability to create in the paint, will compete at point guard. Buggs is a Louisiana native who can do a little of everything as a shooting guard. 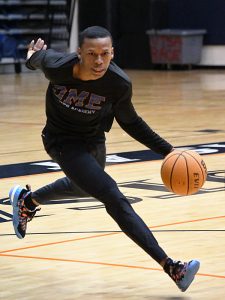 UTSA newcomer Japhet Medor, a junior transfer, is expected to contend for a starter’s role at point guard. He’s known as an effective distributor, but he also displayed in informal scrimmages on Wednesday a smooth stroke on his jump shot. – Photo by Joe Alexander

“Our juco guards are extremely mature,” Henson said. “They just absolutely understand how to be great teammates and leaders … We’re counting on those two to have a big impact on us in terms of minutes and roles but also in intangible things, as well.”

Another guard, 6-5 freshman DJ Richards, is from Cypress Creek High School in the Houston area. He prepped at Montverde Academy in Florida last season.

Hoping to earn playing time in the post is freshman Massal Diouf (6-9, 235) from Gouda, The Netherlands. He’s played with U-16 and U-18 Dutch national teams and attended Western Canada Prep Academy.

Seven-foot Carlton Linguard Jr., who played at Stevens High School in San Antonio, isn’t academically eligible yet. Linguard (7-0, 220) isn’t expected to play for at least the first semester. At the outset of his college career, he had one solid season at Temple Junior College and spent past two in a lesser role at Kansas State in the Big 12.

Germany averaged 15.2 points and 7.3 rebounds last year as a junior. Even though the Roadrunners struggled, the 6-foot-11 Oklahoman emerged as one of the best offensive post players in the C-USA. Germany displayed an expanded array of skills, throwing hook shots from 10 and 12 feet while improving his scoring average by five points from his sophomore year.

Coming off a surprisingly strong second season in the program, three-point shooting specialist Isaiah Addo-Ankrah was awarded a scholarship this summer. The 6-foot-6 Houston native broke out in January of last season by hitting three 3-pointers off the bench at UTEP and five at Rice. He is classified as a sophomore.

Multi-skilled Aleu Aleu has been cleared for contact work when the team begins its initial phase of fall-semester practice on Monday, Henson said. Limited by leg injuries and missing time due to Covid-19, the 6-foot-8 wing played only 10 games for the Roadrunners last season.

Players capable of handling point guard duties this year might include the likes of Japhet, senior Erik Czumbel and sophomore Christian Tucker. At the two-guard, look for Buggs, Czumbel and Richards. Wing forwards would include Addo-Ankrah, Aleu, Lamin Sabally and Azavier Johnson. A power forward group might be comprised of Lachlan Bofinger, Josh Farmer, Aleu and Addo-Ankrah. At center? Germany, Farmer, Diouf and Linguard.

UTSA will host the Schreiner Mountaineers on Nov. 2 in an exhibition, according to the schedule announced on Tuesday. 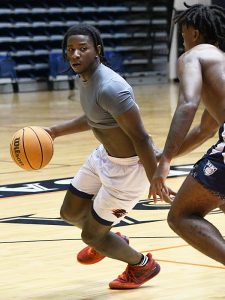 The regular season will commence on Nov. 7 at home against Trinity. On Nov. 11, the Roadrunners will play on the road against the Texas A&M-Corpus Christi Islanders, who in the postseason last spring swept to the Southland Conference title en route to the NCAA tournament.

UTSA returns home to play the St. Mary’s Rattlers on Nov. 14. A homestand continues with a visit from Sun Belt regular-season champion Texas State on Nov. 17, and from Prairie View A&M on Nov. 22.

Hitting the road, the Roadrunners play at the University of New Mexico on Dec. 10 and at Utah on Dec. 13. The Utah game will be the only one in the regular season against a power conference program. In a final tune up before conference, UTSA hosts Bethune Cookman on Dec. 18. C-USA play starts early, on Dec. 22, with a visit from the North Texas Mean Green.