Coach Pat Hallmark, who led the UTSA baseball team to 38 victories and the Conference USA tournament title game last season, has been rewarded with a four-year extension on his contract. 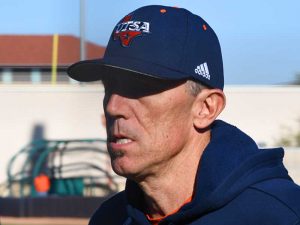 The new deal is scheduled to keep the coach in San Antonio through 2026, according to a UTSA news release.

In his third year at the helm of the Roadrunners’ program, Hallmark pushed his team to a 38-20 record overall and to 19-11 in the C-USA. UTSA finished 11-4 against ranked opponents and 9-3 against top 25 teams.

After opening the C-USA tournament with three straight victories, including two over No. 1 seed and tournament host Southern Miss, the Roadrunners lost 9-8 to the Louisiana Tech Bulldogs in the title game.

UTSA, denied the C-USA’s automatic bid to the NCAA tournament with the loss, nevertheless returned home to San Antonio optimistic.

The Roadrunners felt they had done enough to warrant an at-large bid into the 64-team field. They even invited the media to the NCAA selection show. But in a crushing blow, they didn’t make it.

“Coach Hallmark has our baseball program moving in the right direction,” said Lisa Campos, UTSA Vice President for Intercollegiate Athletics. “His leadership and ability to recruit academically and athletically talented students resulted in one of the best seasons in program history this past spring.

“We’re thrilled to be able to secure him for four more years and very excited about what’s in store for the future of UTSA baseball.”