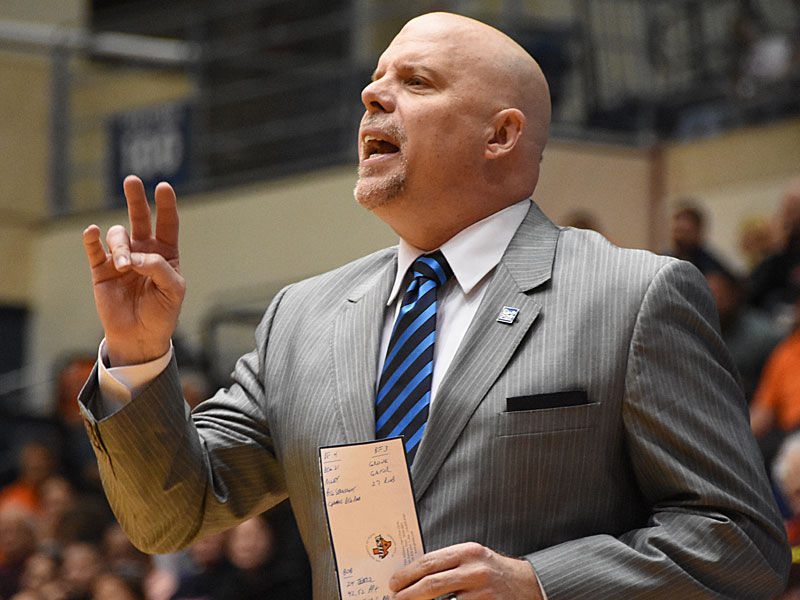 UTSA coach Steve Henson on Wednesday thanked the fans for their continued support even through a slow start. – File photo by Joe Alexander

Coming off a lost week in Florida and preparing to host the powerful Louisiana Tech Bulldogs, UTSA coach Steve Henson issued an appeal to the Roadrunners Nation.

He said Wednesday that he’d like to see as many UTSA supporters as possible attend Conference USA home games on Thursday night against Louisiana Tech and on Saturday afternoon against Southern Miss.

“It’s early on in the race,” Henson said, “but we know that if we want to do something special, we’ve got to win our home games.

“We feel like LA Tech is one of the best teams (in the C-USA) … If they’re not the best team, at least they’re playing at that level, so it’s a very, very important game for us, to get back home.

“When the band is here, when the students are here, we feed off that. Because of the size of our building, it doesn’t have to be 100 percent full. We get that lower bowl filled up over there, it’s good.”

UTSA ranks 12th in the 14-team, C-USA in attendance, averaging only 899 (announced) through six home games.

Henson thanked the fans for their support even though the team hasn’t played as well as expected to this point.

“The season-ticket holders, the fans that sit behind us, have been out in pretty good force for us early in the year, particularly, considering we haven’t had a great start,” he said. “But our loyal supporters have been here.

“The students, we know they’ll get here when school starts. But, you know, they can come even when school’s not in session.”

With the first day of classes set for Jan. 21, UTSA students are still on break.

Nevertheless, Henson said he’s counting on the “Bad Birds,” a boisterous student group that sits behind the media on press row and travels to games in the local area, to give the team a lift.

“The Bad Birds helped us out at Texas State, I know that,” Henson said. “We just need a bunch more Bad Birds.”

UTSA opened its C-USA schedule with losses last Thursday at Florida Atlantic (79-64) and at Florida International (90-83, overtime) … The Roadrunners allowed a three-point lead to slip away in the final eight seconds of regulation at FIU on Saturday night …

Forward Eric Parrish practiced in team drills with the Roadrunners for the first time this week … UTSA is waiting on a ruling from the NCAA to determine whether he can play this season … Henson said guard Adokiye Iyaye is expected to miss 6-8 weeks with a broken right thumb … Forward Phoenix Ford went home to Florida to attend a funeral but is expected to be available against LA Tech.

LA Tech extended its winning streak to five games by routing Southern Miss at home (80-49) and on the road (78-50) to open conference last week … McNeese State transfer Kalob Ledoux comes off the bench to lead the Bulldogs in scoring (13.1). Starters DaQuan Bracey (12.6) and Amorie Archibald (11.9) also average in double figures … The Bulldogs are No. 62 in the NCAA’s NET ratings, the highest rating for a C-USA team.

LA Tech leads UTSA 12-5 in the all-time series. However, under Henson, the Roadrunners hold a 3-2 edge against the Bulldogs over the past three seasons. All five games have been decided by 10 points or less … Here’s a look: