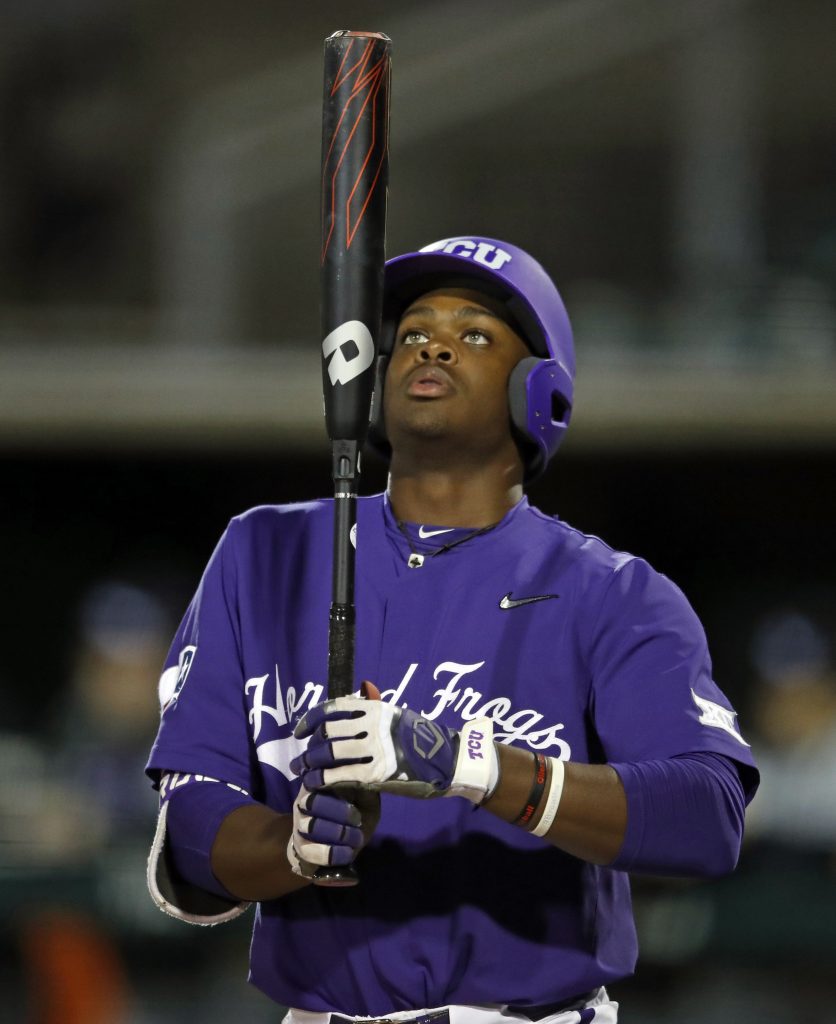 Porter Brown attends Texas Christian University as an undergraduate student in neuroscience. He is a young man with high hopes of one day becoming a doctor, possibly an orthopedic surgeon.

In addition, Brown also plays baseball, a sport in which he may already have earned enough credits to enter the school of hard luck.

It’s true. After sparking San Antonio Reagan to two straight UIL state tournaments, Brown’s career on the diamond has been stalled the past few years by misfortune.

In 2019, he emerged in his first season as a collegian to snag a spot in the starting lineup at TCU, one of the top programs in the nation.

But after hitting .278 and stealing seven bases in eight attempts, the speedster went down with a shoulder injury that knocked him out for the year.

Just as Brown got healthy, adversity emerged again, like a bad hop on a bumpy infield.

The Horned Frogs were off to a fast start in March when the coronavirus pandemic hit, shutting down operations at TCU’s Lupton Stadium, along with just about every aspect of sports and life in America.

Trying his best to shrug it all off, Brown stayed calm, focusing in the ensuing months on what he could control.

Now he’s set to resume his career this summer with the Flying Chanclas de San Antonio in the Texas Collegiate League.

“Growing up in San Antonio, I’ve always watched the Missions and the Flying Chanclas,” Brown said. “When my coach (at TCU) called and told me I had an opportunity to play in my city, in my hometown, I was grateful and excited. I’m excited for baseball to start up in the summer league.”

Brown is scheduled to report to the Chanclas, based at Wolff Stadium, on Tuesday.

The season opener is set for June 30 in Amarillo, and then he and his teammates will open in front of the home fans on July 3 against Acadiana, a ball club based in Lafayette, La.

Even though Brown brings only modest credentials from his star-crossed TCU career to the TCL, he may immediately emerge as a player to watch, especially when fans witness his speed.

For fans who have never seen him accelerate from first to second base on a steal attempt, they can ask Reagan coach Chans Chapman for verification of his ability.

“I think the thing that jumps out at you is the way he runs,” Chapman said. “I mean, he’s one of the fastest guys, as far as baseball speed, that I’ve ever been around. Like I said, he’s a very dynamic player. I mean, he can hit. He runs the bases well. He’s good defensively.

“You know, he can change the game. He can affect the game in so many ways.”

Ever since he donned a uniform and suited up at McAllister Park Little League as a 10-year-old, Brown has played with joy and enthusiasm.

He’s played for his teammates. But this summer, the season is also about opportunity.

A year from now, he’ll be eligible for the Major League Baseball draft. And because he’s only played a combined 29 games at TCU during the past two springs, Brown knows he needs to turn it on.

He is a strong student academically at TCU, one who might one day wield a surgeon’s knife. But Brown also wants to find out whether he is good enough to swing a bat in the pros.

Asked about his big-picture dream in baseball, Brown paused and answered carefully.

“Right now, my dreams are smaller,” he said. “One pitch at a time. One game at a time. One summer league at a time, is really what matters. Once I get to the future, I’ll worry about that then.”

Brown was a dynamo at Reagan, batting .360 and .385 in his last two seasons, respectively. Over those two years, he smacked 18 doubles and stole 55 bases, including 29 steals in 31 attempts as a senior.

In the past few weeks, Chapman has watched Brown take batting practice at Reagan. As Brown battered balls to the fence and beyond, the coach marveled at the way his former player has changed physically since 2018.

“You could tell that getting bigger and stronger has helped him, just the way the ball comes off the bat now,” the coach said. “That’s not to say it didn’t … when he was in high school, but (after) two years in a college weightlifting program, it does come off different.”

At TCU, fans have yet to see Brown’s full potential. He played only 16 games in 2019 when he hurt his shoulder.

This year, he was batting .189 in 13 of TCU’s 15 games when it all came to a stop, with the COVID-19 threat eventually ending the season.

Regardless, Brown remains as a prospect. He was scheduled to play in the highly-regarded Cape Cod summer league before it, too, was canceled.

TCU coach Jim Schlossnagle said it’s evident that his outfielder’s progress has been slowed by the circumstances.

“Porter is an outstanding young man with an incredible amount of potential both on the field and off,” Schlossnagle said. “When he is at his best and healthy, he is a dynamic offensive player and a very capable defender in the outfield.

“He has had to overcome some injury and, like the rest of our players, the COVID pandemic has stunted his development. (But) he is a supreme worker, incredibly intelligent and very self aware.”

Brown also is grateful, happy to have the chance to play at home this summer.

The Flying Chanclas of the Texas Collegiate League are scheduled to play their home opener on July 3. All home games are set for Wolff Stadium. — Photo by Jerry Briggs