John McLaren has been in baseball for 50 years. He’s played in the minor leagues. He’s managed in the majors and has coached in the playoffs. 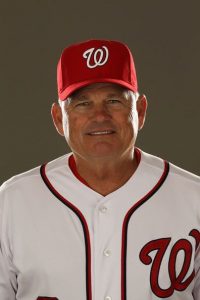 Now the 67-year-old Arizona resident and Texas native is happy to continue with his passion as manager of the Flying Chanclas de San Antonio. The Chanclas will play in the Texas Collegiate League this summer, with the season starting June 30 in Amarillo.

The team will open at home at Wolff Stadium on July 3.

With the minor league season on hold because of the coronavirus pandemic, Missions president Burl Yarbrough elected to host a team in the TCL.

One of the key hires was McLaren, who has managed the Seattle Mariners and, briefly, the Washington Nationals.

In a telephone interview Wednesday, McLaren said he’s “ecstatic” about the opportunity to work during a “crazy” time in baseball.

“I’m excited about it,” McLaren said. “The last time I coached in the major leagues was in 2017 in Philadelphia and then I did the China national team (as manager, at the 2017 World Baseball Classic). I have a lot of international experience.

“San Antonio was always one of my favorite spots when I was scouting, and there are a lot of reasons for that.

“It’s the atmosphere. Burl and his staff treated all the scouts great. Probably one of the most influential people in my baseball career, (the late) Al LaMacchia was from San Antonio. I’m from Houston. So I grew up with the Alamo and the history and everything.

“I just always enjoyed going to San Antonio. It’s one of my favorite spots that I ever (visited). When Burl called (with the job opportunity), I was ecstatic.

“I (told him) I really wasn’t doing anything. Baseball’s kind of crazy these days, as we know. This is something good. I get to work with kids. I enjoy coaching. I hope I can share some experiences with them to make them better players. It’s always fun putting teams together.

‘I’ve had great support from (scouts) Jimmy Gonzales and Brandon Larson, Johnny Almaraz. I’m a Texan. I live in Arizona. But I’m a Texan. I can’t say anything more than that. With my heritage, I like being around Texans.

“They’re good people, and they’re caring. So, it’s a great fit for me.”

After a full career in baseball, including coaching appearances in the major league playoffs with the Toronto Blue Jays and the Mariners, not to mention multiple trips to the World Baseball Classic, McLaren jumped at the opportunity to work in the collegiate league in spite of concerns about people 65-and-over being susceptible to serious illness as a result of COVID-19.

“I’m a baseball guy,” he said. “My life — my DNA — is baseball. I understand the risks. My wife is concerned. Not only about me, but she has an optical shop, and she has to work with people and be around people.

“I try to be extremely careful. I wash my hands a lot. I wear the mask when I’m around people. I keep my distance. I’m going to be careful with my life, and baseball is my life. You take that away from me, and I don’t know what I have.

McLaren was born in Galveston and grew up in Houston, where he attended Westbury High School. Drafted in 1970 by the Astros, he played seven years in the minors before shifting his focus to the coaching profession.

In the major leagues, he worked for 14 years on staffs with manager Lou Piniella, including a 2001 team in Seattle that tied a baseball record with 116 regular-season victories before losing in the American League Championship Series to the New York Yankees.

He managed the Mariners from mid-season in 2007 through the mid-season in 2008. McLaren also worked briefly in 2011 as interim manager of the Nationals. He described his style as aggressive.

“I’m always on the offense,” McLaren said. “I’m always aggressive, trying to make things happen. I like the game in motion. I think we got to find out, No. 1, what kind of team we have … what kind of personnel we have.”

Without knowing much about Flying Chanclas personnel at this point, McLaren kept it simple when asked about his goals for the season.

“We want to be competitive and we want to make all the players better,” he said. “I want ’em to have fun. I want to have baseball in San Antonio — for the fans. Just want everybody to have a good time.”