Tyler Stevenson scored 22 points and Walyn Napper added 19 Tuesday night as the Southern Miss Golden Eagles ousted the UTSA Roadrunners in the first round of the Conference USA tournament, 67-64. 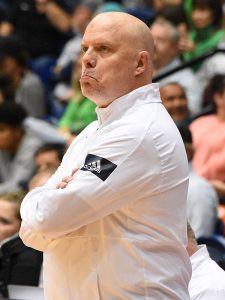 Jaron Pierre hit a clutch 3-pointer down the stretch and finished with 12 for the Golden Eagles, who snapped a 14-game losing streak.

Jacob Germany led the Roadrunners with 28 points and 12 rebounds. The Roadrunners committed 18 turnovers and finished the season with a record of 10-22.

Admitting to a “sick feeling” over the loss and the way the season ended, UTSA coach Steve Henson nevertheless paid tribute to the players who finished out a season marked by injuries, Covid-19 disruptions and roster upheaval.

“We started out six years ago recruiting high character guys,” Henson said on the team’s radio broadcast. “There are 12 high-character guys in that locker room right there that continued to prepare the right way.

“If you had walked into practice last Monday and Tuesday, and didn’t know our record, you’d think we had a pretty good year. The guys were still fighting and practicing the right way. They stayed together. That’s a real credit to them.

“Time does not heal all wounds. That’s not true. This will feel like crap for the rest of our lives. It just does. There’s nothing we can do about that. It’s a good group of guys. I really loved ’em and cared about ’em.”

UTSA — Jacob Germany finished with a 28 and 12 night. He sizzled with 12 of 20 shooting from the field. Some were difficult shots, too, high-arching hooks from 14 and 15 freet. Isaiah Addo-Ankrah finished with 14. He hit 4 of 8 from three. Lachlan Bofinger and Erik Czumbel scored 10 apiece. Bofinger was effective in hitting 5 of 9 shots and snaring 6 rebounds. Dhieu Deing had a tough night, scoreless on 0 for 9 shooting, including 0 of 8 from three.

Southern Miss — Tyler Stevenson, one of the Golden Eagles’ best players who had been out four games with an apparent injury, came off the bench for 22 points and seven rebounds. He was 9 of 12 from the field. Walyn Napper, Deing’s teammate last year at Dodge City (Kan.) Community College, also hurt the Roadrunners with 19 points on 8 of 14 shooting. Both Stevenson and Napper hit shots in the final two minutes. Jaron Pierre hit a go-ahead three with 2:16 remaining.

Jacob Germany drove for a dunk on his first touch and then went to work with some soft hooks. In all, he made five straight field goals to open the half against Southern Miss.

The Roadrunners followed Germany to a nine-point lead in the first 10 minutes en route to a 30-25 halftime advantage on the Golden Eagles.

Germany finished the half with 17 points and six rebounds. Unfortunately for the Roadrunners, they were too careless with the ball, committed nine turnovers and allowed the Golden Eagles to stay close.