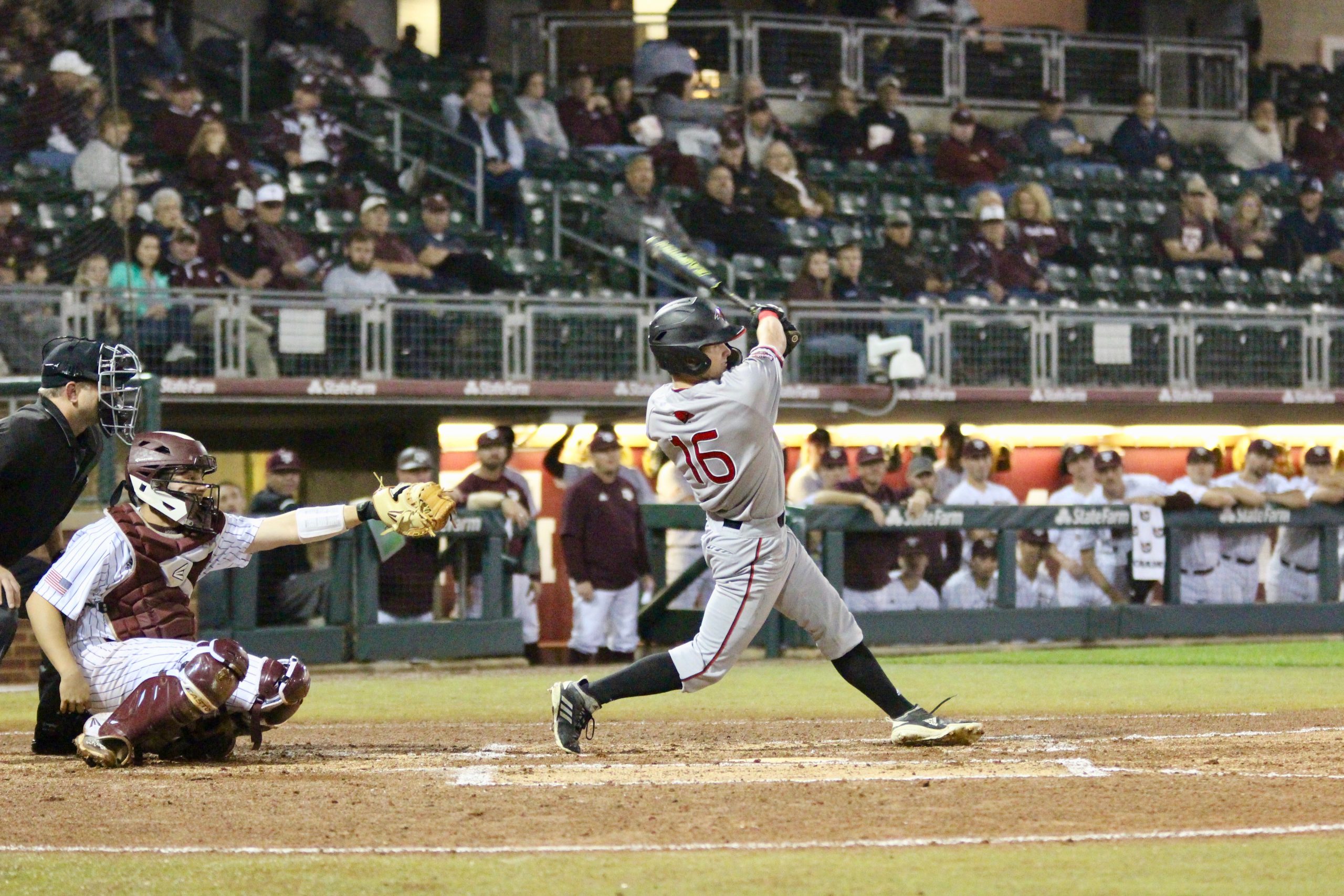 In 2019, Jordan Thompson hit .310 in 25 games as a freshman at the University of the Incarnate Word. Notably, he belted a three-run homer to lead UIW’s 6-5 victory at Texas A&M – Photo, courtesy of UIW athletics.

Competing to win a starting job in the outfield for the Flying Chanclas de San Antonio, Jordan Thompson paused Friday night to discuss what the fans might expect when a 30-game Texas Collegiate League season starts next week.

From all indications, Thompson could play a major role despite his physical stature (5-feet-9, 165 pounds) as the smallest player on the squad. He is coming off a spring in which he hit .435 for Grayson College, earning an offer to play next season at Texas A&M.

“I think this summer’s really going to help me develop as a player, because of our coaching staff,” Thompson said. “They’ve had so much experience at the professional level. It just gives me an opportunity to pick their brains and learn what I have to do to better myself, to (reach) the next level.

“And our team, it just has a lot of talent on it. (I want to) just pick their brains, too. Because there’s obviously a reason where they are. You can always learn a lot of things from a lot of people, different perspectives. It’ll just be really good getting that from everyone else.”

In 2018, as a senior at Boerne Champion, Thompson hit .548 and earned first-team, all-state honors in Class 5A.

Judged as too small by some major college recruiters, he accepted an offer to play as a freshman at the University of the Incarnate Word, where he made headlines early in the spring with a three-run home run to beat A&M at College Station.

But just as Thompson started to make substantial progress with the Cardinals, hitting at a .310 clip over the first 25 games, he suffered a painful back injury that knocked him out for the season.

Later that year, in the summer, Thompson was confronted with another bit of adversity when Pat Hallmark resigned as UIW’s coach to take a job at UTSA.

The ball player decided he, too, would leave.

Thompson turned up for the 2020 season at Grayson, a powerful junior college program located in Denison, about 70 miles north of the Dallas-Fort Worth MetroPlex.

Intent on proving himself, he jump all over the baseball, pounding out 27 hits in 62 at bats in 19 games.

Of those hits, six went for doubles, two for triples and five for home runs. He also drove in 21 runs in the coronavirus-shortened season, prompting the Aggies to come calling.

Thompson, who will enroll at A&M in the fall, said “it feels great” to get the scholarship to a Southeastern Conference program.

“My journey to get there was a little unconventional, but it’s my journey, and I wouldn’t change it for the world,” he said. “Going from UIW, a coaching staff change, leaving to go to Grayson, then going on to Texas A&M, I love my story. I’m just really excited to be where I want to be. It’s every kid’s dream to go to a Power 5 conference, Texas A&M especially.”

Even though he humbled the Aggies with his mighty swing for UIW two seasons ago and ripped five more over the fence at Grayson, Thompson’s game revolves more around hitting for average and then running the bases aggressively.

“I think that’s real big (in my game),” he said. “The presence of speed on the bases … will speed up the pitcher’s head. They always have to worry about you on first base, second base. There’s a lot of problems you can create with speed.”

To illustrate his point, Thompson, who hits from the right side, said he singled into left field once earlier this spring against Ranger Junior College. He said he took advantage when he noticed that the fielder was playing the ball with a “lackadaisical” effort.

“I just decided to go for a double,” he said. “It caused a little problem. They were all frantic. And, just got into their heads.”

It’s a style that should mesh with Chanclas manager John McLaren’s philosophy of pushing the pace in a game. Thompson said he thinks he will enjoy playing that style, under McLaren, a former manager with the Seattle Mariners and Washington Nationals.

“I like to put pressure on people, because some people can’t take the pressure,” he said. “Some people will just fold underneath it. I love the pressure and I embrace it. I use it to help drive me through games and practice. Being aggressive, that’s just how I am.”