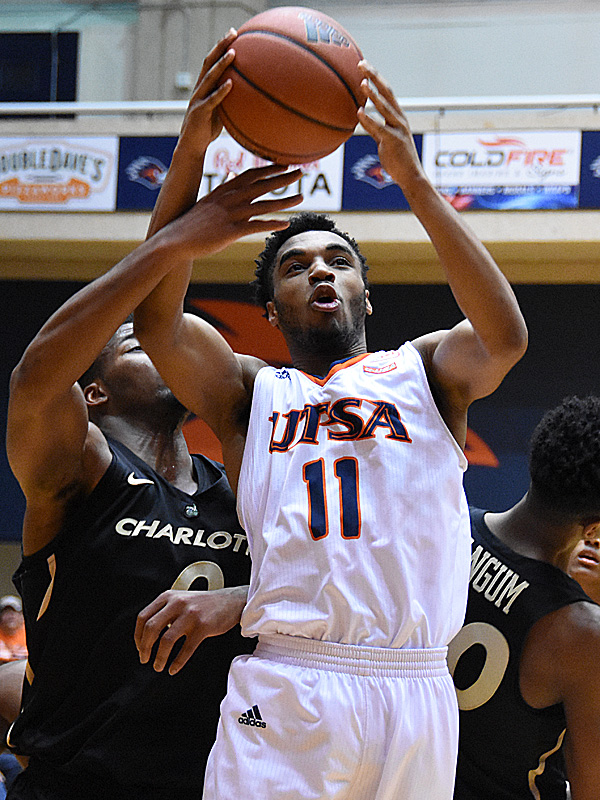 Freshman Adokiye Iyaye says his UTSA teammates have a high level of confidence as they embark on a two-game trip this week to Southern Miss and Louisiana Tech. – Photo by Joe Alexander

After a clunky start to the season last fall, UTSA has transformed itself into a smooth operation, a basketball team that expects to win.

The Roadrunners have won 15 of their last 20 leading into a key Conference USA road trip this week to Southern Miss and Louisiana Tech.

Moreover, they’ve moved into a virtual tie for first in the C-USA with Old Dominion, all of which has made UTSA coach Steve Henson proud of his players for their efforts.

“Proud of the way they handled it early on when we weren’t winning, when we weren’t playing great basketball,” Henson said. “You know, our guys stayed together. They believed in each other. They knew they had enough talent in the locker room to turn it around.

“Early in the season, we talked about our leadership and maturity, and those things really came through when we needed them to.”

Old Dominion (20-6, 10-3) and UTSA (15-10, 9-3) lead the C-USA race as teams around the conference forge ahead into the last weekend before a four-game, ‘bonus play’ phase of the schedule commences next week.

In all, the Roadrunners will play six more games to complete the regular season, including Thursday night at Southern Miss and Saturday afternoon at Louisiana Tech.

At Southern Miss, the Roadrunners will play in a venue where they’re 0-5 all time, including 0-2 in two trips during the Henson era.

In addition, the fifth-place Golden Eagles (15-9, 7-5) have won four straight.
Given all that, Southern Miss can expect a serious challenge from the Nos. 1 and 3 scorers in the conference – UTSA guards Jhivvan Jackson and Keaton Wallace.

The two have taken turns in leading the Roadrunners to important C-USA victories over North Texas, Old Dominion and Marshall.

“Whenever we step on the court, we just feel like we’re going to win every game,” UTSA freshman Adokiye Iyaye said. “That’s our approach.” 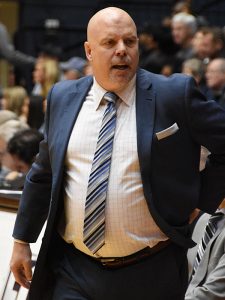 After sweeping Florida International and Florida Atlantic last week, the Roadrunners learned late Saturday that they had clinched a spot in the top tier of bonus play.

In other words, UTSA will be grouped with the C-USA’s top five teams after Saturday to play its last four games.

“It guarantees us six really, really tough games (to close the regular season). I know that. But it also gives us a chance to play the other teams that are fighting for the league championship.

“We know that we’re going to have four really tough games. Two at home. Two on the road. That’s all we know at this point.”

The new scheduling format was voted in last spring in an effort to help the conference get more than one team into the NCAA Tournament.

It was also designed to help an NCAA qualifier, or qualifiers, get higher seeds in the 68-team bracket.

Henson said it doesn’t look like the C-USA will get a second team in the NCAA field this season.

The coach said it’s unlikely that anyone beyond the C-USA tournament champion will make it because teams didn’t do enough in pre-conference games for the ‘bonus play’ matchups to help.

Asked if he thinks C-USA will elect to employ the ‘bonus play’ experiment next year if, as expected, a second team doesn’t make it, Henson declined to speculate.

“Well, it’ll be interesting,” the coach said. “We’ll go to those league meetings. Everybody will start out the meeting trying to figure out what’s best for the league, and then in the end, everyone starts fighting for their own territory.

“You know, it’s hard. You got to get 14 people on the same page. You have to look at the big picture. We all are in agreement (that) we want to be a two-bid league. A three-bid league. We’ll agree that the teams at the top are good enough.”

Henson pointed out that the one C-USA entry in the NCAA field each of the past four seasons has won at least one game against a higher-seeded opponent.

“You know, we go to the NCAA Tournament every year, and we win … four straight years, against elite opponents,” he said. “We go in with a low seed and knock off good teams. We know the potential is there.

“We just have to figure out the best way to do it.”