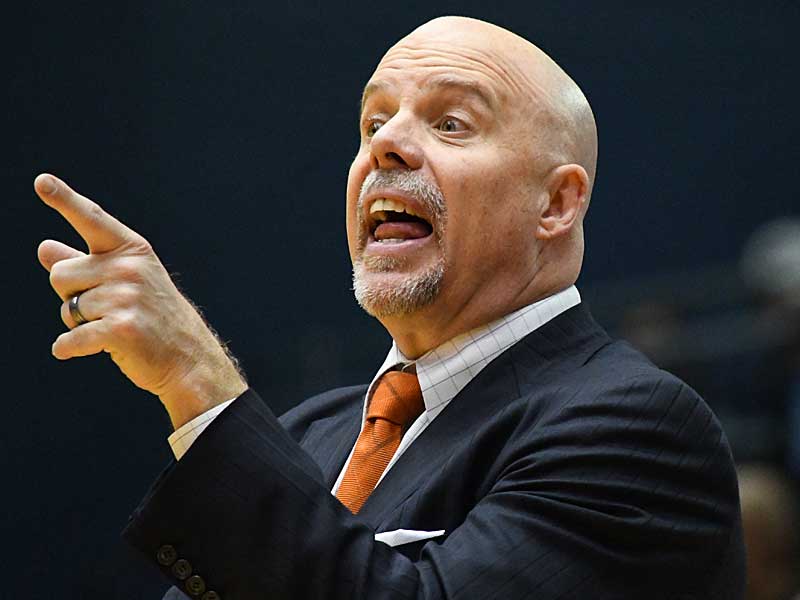 Coach Steve Henson is preparing to open his sixth season as men’s basketball coach at UTSA. – Photo by Joe Alexander

For fans of the UTSA Roadrunners, it may take awhile to adjust, in terms of not seeing 2,000-point scorers Jhivvan Jackson and Keaton Wallace on the floor this fall.

It will be strange. But as far as sixth-year coach Steve Henson is concerned, he more or less has already turned the page mentally.

Henson said Friday that he very much likes the energy of his newest group of Roadrunners.

“You walk in right away and you notice the competitiveness,” he said. “The group’s really getting after it … What really jumps out is the defensive intensity (and) the length.”

Last season, as Jackson and Wallace played their fourth and final seasons together, UTSA finished 15-11 overall and 9-7 in Conference USA.

After Jackson hurt his shoulder in the opener of the C-USA tournament, the Roadrunners were eliminated by Western Kentucky in the quarterfinals.

Since then, Henson and his staff have been busy making plans for the new group of players and the new season. Conditioning drills have been ongoing since the start of the fall semester.

“We’ve got more 6-6, 6-7 guys than we’ve ever had before,” Henson said. “So the length, in the passing lanes — some of those guys are really getting after it, getting pretty good ball pressure. (We’re) just super competitive in the defensive segments.”

UTSA had a banner day in the offseason on April 6. On that day, the Roadrunners announced the signing of guard Darius McNeill and forward Josh Farmer.

Farmer is a 6-9 freshman from Houston Sharpstown, the 10th-rated player in the state. McNeill is a 6-3 senior transfer who has played two seasons at the University of California in the Pac-12 and one at SMU in the American Athletic Conference.

“With Darius, we were thrilled when we were able to get him to transfer over,” Henson said. “Like we said (in our news release), he had two really good years out at Cal. He transferred back closer to home, went to SMU. Sat out a year and then played one year at SMU. So, he’s had a lot of success.”

UTSA on Friday learned that the NCAA had granted McNeill a waiver, allowing him to play immediately. Henson said he wants McNeill to set the tone for the Roadrunners defensively.

“If you’re looking for someone to compare him to physically, Keaton (Wallace) would be a good one,” the coach said. “Really, really strong. Similar size. Lefty. But really, really can get after the ball.

“He guards the ball, heats it up. Applies pressure. Unbelievably quick on the turf, in the stuff you can measure. On the court, it’s just obvious.

“We’re thrilled with what he can do setting the tone for our defense. Always in the gym. Absolutely living in the gym right now. Made a lot of threes at Cal. It’s proven he can do that. We haven’t done much with any pace at this point.

“But I think he’ll be pretty good in the open court, as well.”

Henson acknowledged that it was a “big deal” for the Roadrunners to land a player of his stature.

“He’s got a lot of experience and he’s extremely tough,” Henson said. “That was a really, really good get for us.”