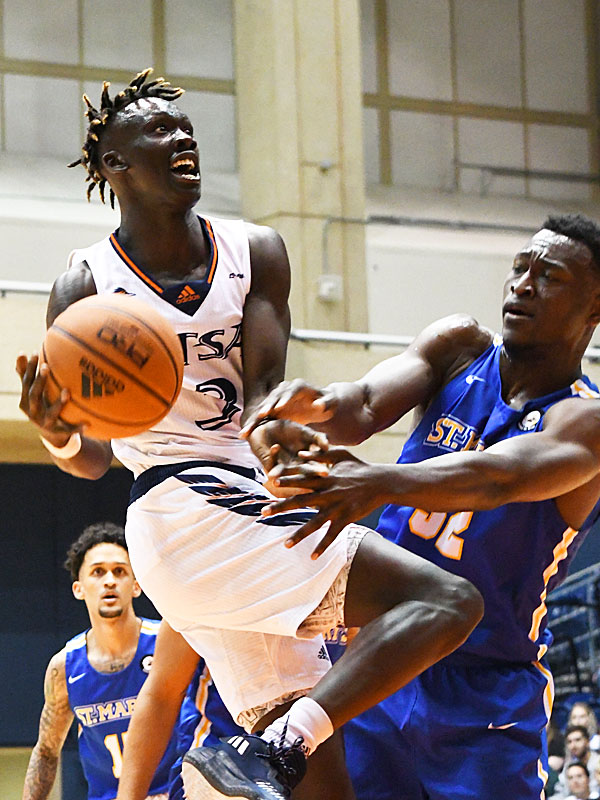 Junior Dhieu Deing has scored 53 points and has hit a combined 17 of 32 shots from the field in his last two games. Deing also has scored 20 or more in three of his last four. – Photo by Joe Alexander

Dhieu Deing did a little bit of everything on the basketball floor Monday night. He scored. He rebounded. He created on the dribble.

The multi-talented, 6-foot-5 forward even took a charge in crunch time that helped fend off a late rally, allowing the UTSA Roadrunners to surge past the St. Mary’s Rattlers 75-65 at the Convocation Center. 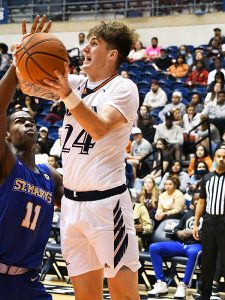 Jacob Germany scored 18 on Monday night against St. Mary’s. He hit 6 of 11 from the field and 6 of 8 from the free throw line. – Photo by Joe Alexander

Is the former North Carolina prep standout now a candidate to sell soft drinks and popcorn at halftime?

How about issuing him a trombone and letting him rip off a few solos the next time the UTSA band comes out to play?

After Deing produced a season-high 27 points and 11 rebounds against the Rattlers, UTSA center Jacob Germany marveled at the showing.

“Oh, he’s all over the place,” Germany said. “I think he had, what, 27 and 11 and four (assists)? He’s just doing everything. We wear these heart monitors (in practice), and his heartbeat is always the highest, because he’s always moving all over the place.

“That’s what he brings for us, and you know, we need that every game.”

On Deing’s defensive gem, St. Mary’s was trailing by six points with 1:33 remaining when forward Mamady Djikine posted up on the left block and tried to wheel into the lane for a shot.

Taking the brunt of the blow in his chest, Deing fell backward. Foul on Djikine, was the call.

“I seen the whole game that he was putting his shoulder down, so I read it,” Deing said. 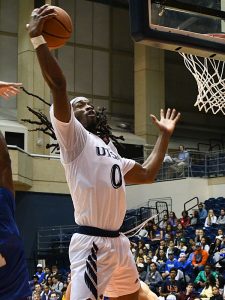 UTSA senior Cedrick Alley Jr. led all rebounders with 12 as UTSA won the battle on the boards, 52-38. – Photo by Joe Alexander

On the other end, UTSA freshman guard Christian Tucker beat the defense to the rim, drew a whistle and knocked down two free throws with 1:16 left for a decisive eight-point spread. St. Mary’s never got closer than six the rest of the way.

For the Roadrunners, there wasn’t so much jubilation in the locker room as there was just a good feeling about surviving in what was sometimes an ugly game.

Besides Deing, the principals in the victory were Germany (18 points, four rebounds) and Cedrick Alley, Jr., (12 rebounds), not to mention a blue-collar effort off the bench from Lachlan Bofinger, Phoenix Ford, Erik Czumbel and Tucker.

Guard Caleb Jordan led four Rattlers with 17 points, but in a nod to the Roadrunners’ defense, it took him 18 shots to get there.

As a team, St. Mary’s managed only 34.7 percent shooting, including 28.9 percent in the first half when UTSA built a 37-25 lead. During one stretch in the first half, the Roadrunners flummoxed the Rattlers with a scheme that allowed only one field goal in 12 attempts.

UTSA senior guard Darius McNeill, with a walking boot on his right foot, did not play. Coach Steve Henson said McNeill likely won’t be able to play at Grand Canyon. “He’s going to be out for a little while,” the coach said. 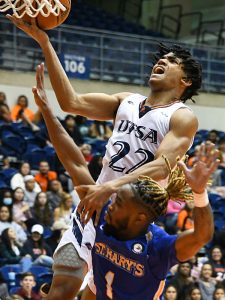 Freshman Christian Tucker drew a foul on this drive to the basket en route to a pair of clutch free throws with 1:16 remaining. – Photo by Joe Alexander

Bofinger also hurt his right ankle in the second half and did not return. “He wanted (to go back in the game,” Henson said. “Just a little swelling. He’s incredibly tough. He was trying to get back in there and (trainer) Josh (Modica) shut him down. I anticipate him being a little sore tomorrow. (But) I think he’ll be able to practice.”

Deing has scored 53 points in his last two games. During that stretch, he has hit 17 of 32 from the field for 53.1 percent … He has scored 20 or more in three of his last four … With the victory, the Roadrunners improved to 10-3 against St. Mary’s, a Division II program in San Antonio, and they also completed a six-game homestand with a 4-2 record, including four wins in the last five.

“So many weird plays (tonight). So many things we need to do better. Even at halftime, there was kind of a weird vibe. We’re up 12. Our guys should be in there feeling good. The guys knew we didn’t play the right way in certain areas of the game. St. Mary’s was good. We weren’t surprised … (Our) turnovers came in bunches. We didn’t handle their press very well. They pounded us inside. Just an uncomfortable game from a lot of standpoints.” — UTSA coach Steve Henson

By the end of the half, UTSA built a 37-25 lead. But St. Mary's had its moments. Here, forward Mamady Djikine rejects a dunk attempt by Dhieu Deing of the Roadrunners. https://t.co/hyCDEtJ4sq pic.twitter.com/VESITjiJyv