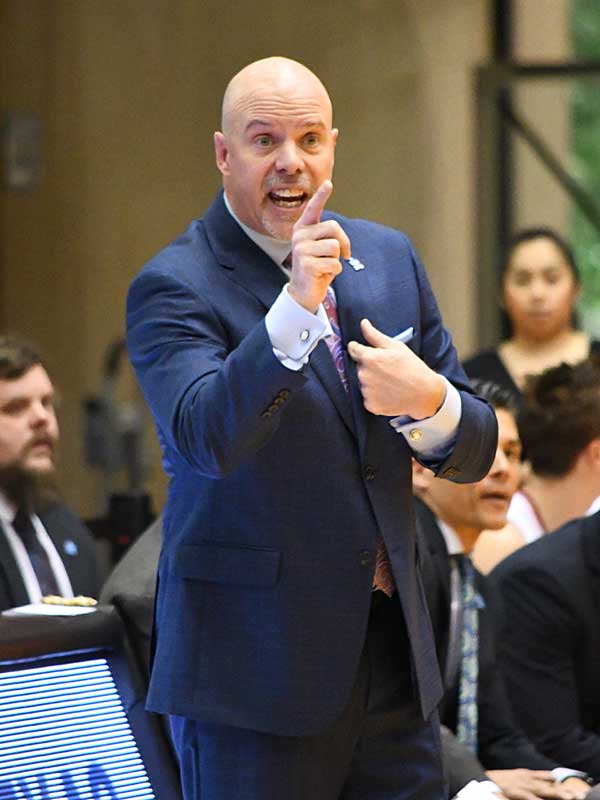 Steve Henson says he likes the way his players have embraced a commitment to improved play on the defensive end. – Photo by Joe Alexander

A year ago, optimism soared among followers of the UTSA basketball program. Coming off two straight winning seasons, and with a high-scoring backcourt duo returning, the Roadrunners were picked to finish second in Conference USA.

For a variety of reasons, the season didn’t work out the way the pundits thought it might, and it didn’t come close to what Coach Steve Henson wanted.

UTSA finished 13-19 overall and 7-11 in the C-USA. The Roadrunners, seeded 10th in the conference’s postseason tournament, lost on opening night in Frisco to the UAB Blazers.

On Tuesday morning, eight days before the season opener at Oklahoma, Henson reflected in a telephone interview on what went wrong last winter and what the program has done to address the shortcomings going into his fifth season on campus.

“Certainly the initial response, and the most glaring area, was the defensive end,” he said. “We talked about that in the post-game on many nights (last year).

“We just didn’t get where we needed to on the defensive end. We didn’t defend at a level high enough to win enough ball games. So, that was the talk — that was all the talk in the offseason.

“It was, ‘How do we change that? How do we change our approach?’ Certainly it starts with me and having more focus and more emphasis, more time (devoted to it) in our early workouts, and we’ve done that,” Henson said.

Led again on the offensive end by Jhivvan Jackson and Keaton Wallace, the Roadrunners will employ some new personnel to the rotation in hopes of improving on a defense that ranked in the lower half of C-USA in field goal and three-point percentage allowed.

“I think we’ve got a group that’ll be more committed on that end,” Henson said “They want to make improvements on that end of the floor, and they understand that we can’t reach our goals unless we defend at a high level.”

The Roadrunners are looking to a pair of transfers, Cedrick Alley, Jr. and Eric Parrish, to help make up for the loss of Byron Frohnen and Atem Bior. Both will play roles in the positions of small and power forward, Henson said.

So far this fall, Henson said he likes what he has seen from his players, in terms of embracing the defensive mindset.

“Oh, very much so,” he said. “We’ve added some new faces and we think that will help. More importantly, it’s our … commitment and our focus.

“Again, that starts with me and our coaches, just making sure that that’s the priority. We’ve got talented guys offensively, and we assume we’ll be able to put the ball in the hole.

“Now, we weren’t great offensively. I don’t think we were anywhere near we needed to be offensively, either. But all the talk has been defense — (how to avoid) the breakdowns, how to simplify things schematically on the defensive end, mindset, effort.

“All those things go into it.”