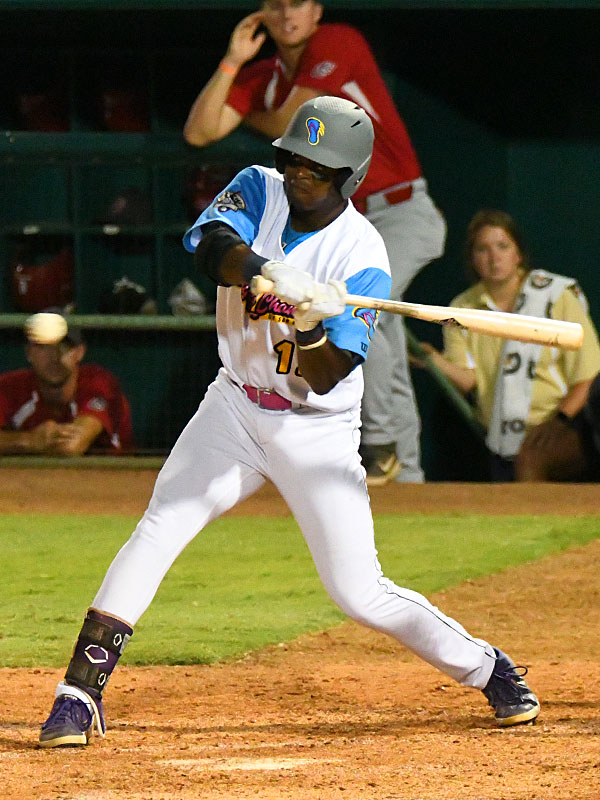 Outfielder Porter Brown is out for the season with a broken finger, Flying Chanclas manager John McLaren said Tuesday. The injury was revealed in an X-ray on Monday. – photo by Joe Alexander

Just when the Flying Chanclas de San Antonio seemed to pick up some momentum in their first season in the Texas Collegiate League, they’ve run into a rough patch of misfortune.

Manager John McLaren said Tuesday that outfielder Porter Brown, the team’s leading hitter, has been lost for the season with a broken finger. Also, third baseman Conner Shepherd is expected to miss at least a week, also with a finger injury.

McLaren delivered the news in a telephone interview just hours before the Chanclas, riding a four-game winning streak, were scheduled to play a road game in Louisiana against the Acadiana Cane Cutters. The game has since been canceled because of unfavorable field conditions.

Both players apparently suffered the injuries when they were hit by pitches. Brown’s incident happened last Wednesday in Game 2 of the season at Amarillo. Shepherd had to come out of Sunday’s home series finale against Acadiana.

McLaren said the diagnosis on both TCU scholarship players came on Monday when the two went in for X-rays.

Going into the exams, McLaren thought Shepherd’s hand injury was more serious and that Brown was just sore. But it turned out to be the other way around.

Brown, a former Reagan High School standout, said in a text message to The JB Replay that the fracture was on his right-hand pinky finger. He had played in all six games and was leading the team with a .375 average.

“He’s a tough kid,” McLaren said. “I asked him every day how he was feeling. He said, ‘I’m good skip. I’m ready to go.’ The way he was swinging the bat, he wasn’t favoring it at all … You’d have never known anything was wrong with him.”

As the Chanclas open a series in Louisiana, starting a stretch in which they play six of the next eight on the road, they’re expected to transition infielders Leyton Barry and Lee Thomas into left field, where Brown was playing.

“We’ll mix some guys in there at third base (to replace Shepherd),” McLaren said. “We got some versatility. So, we’re going to utilize it. We’ll try to mix some guys into different positions.”

After losing two straight to open the season, the Chanclas defeated Amarillo on the road last Thursday, and then followed by sweeping three games at home from the Cane Cutters. 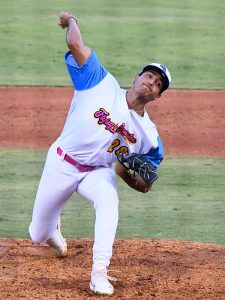 Reliever Arturo Guajardo delivers a pitch against the Acadiana Cane Cutters on Sunday at Wolff Stadium. He struck out six in 2 and 2/3 innings. The Chanclas’ bullpen has helped spark the team’s four-game winning streak. – photo by Joe Alexander

Even though the weather has been hot and humid, McLaren said his team has held up well in the early going of the 30-game season.

“We’re fine,” McLaren said. “We got a good group of kids and we got a lot of enthusiasm. There’s days that we hit (indoors) in the cage when it’s hot, and taking infield. We’re doing our best to monitor the situation as we go on.”

Pitching out of the bullpen has been a strength of the team during the winning streak, with the Chanclas getting solid performances from Tyler Flores, Kobe Jaramillo, Matthew Sesler, Connor Schmidt and Arturo Guajardo.

“We’re still sorting things out (on the pitching staff), trying to get everybody a role,” McLaren said. “We’ll see where we are, see if we need to flip some guys from starting to relieving. I’ve been very happy with the way the guys have been throwing. It seems like they’re getting better every time out, getting more relaxed.

“That’s a big part of it, for them to feel comfortable.”