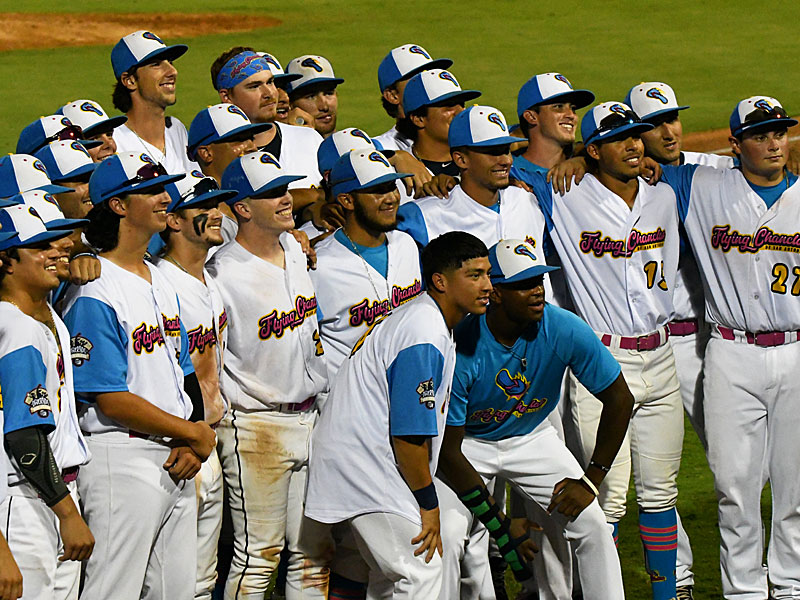 Players on the Flying Chanclas de San Antonio gather for a photo after their game July 29 at Wolff Stadium. – Photo by Joe Alexander

I will bet you that the Flying Chanclas de San Antonio remember this summer for the rest of their lives.

They came together at the height of a pandemic, practiced for a week or so, and then plunged head-long into a season of uncertainty. With the coronavirus raging all around them, with hundreds of people in the nation dying from Covid-19 on a weekly basis, a group of college-aged kids kept their wits about them and played well.

Bouncing back from an 0-2 start, they initiated a regular-season streak in which they won 13 of 18 games at one point. At the end of the stretch, they led the South division in the Texas Collegiate League by a game and a half. It looked like they might have enough juice to win the title. But, it wasn’t to be.

They were eliminated from the TCL playoffs on a hot and muggy Wednesday night in Bryan. The Brazos Valley Bombers won 7-3, sweeping both games from the Chanclas in a best-of-3 series for the South title. All told, the Chanclas lost seven of their eight games overall.

But, really, that’s not what the players should dwell on as they move on to the next chapter in their careers. What they should remember are the friendships they made and the bond that they created with a small — but passionate — group of fans who followed them.

For a few hours each night, they helped a gaggle of curious onlookers feel almost normal again.

Count me among them. As a precaution, I didn’t attend one Chanclas game at Wolff Stadium. I felt it was more important to stay home and stay out of the crowds. But I did watch nightly on the TCL live stream, and I did try to talk to manager John McLaren and to as many of the players as possible on the telephone.

I wanted to give them all their due, because everyone, from the Missions’ front office, to the vendors, and to the ticket takers, they all stepped up and kept the game of baseball alive in San Antonio for the summer.

Because of the pandemic, just about every aspect of our lives has been interrupted — baseball season included.

Major league camps were closed in March as the virus spread. They remained closed through June. Finally, just as the MLB came to life last month, officials canceled all the minor league seasons around the nation.

In San Antonio, it meant that fans would not have a pro team to cheer for the first time in 53 years.

To the Missions’ credit, they battled through it. They didn’t quit. They bought into the TCL, gathered together a group of players from the local high schools and colleges and started playing ball.

The stands at Wolff weren’t packed, because they couldn’t be.

By state regulation, the gatherings were limited to 50-percent capacity. So, the fans didn’t really get to embrace the Chanclas en masse. But, all in all, I think it was a good show. A summer that I’ll always remember. In time, I bet the players will, as well.

Playoffs at a glance

Here is the latest on the Texas Collegiate League playoffs:

North Divison — Tulsa wins, 14-2, in Amarillo The Drillers even the series with the Sod Squad at one game apiece. Amarillo hosts Tulsa again Thursday night for the North title.