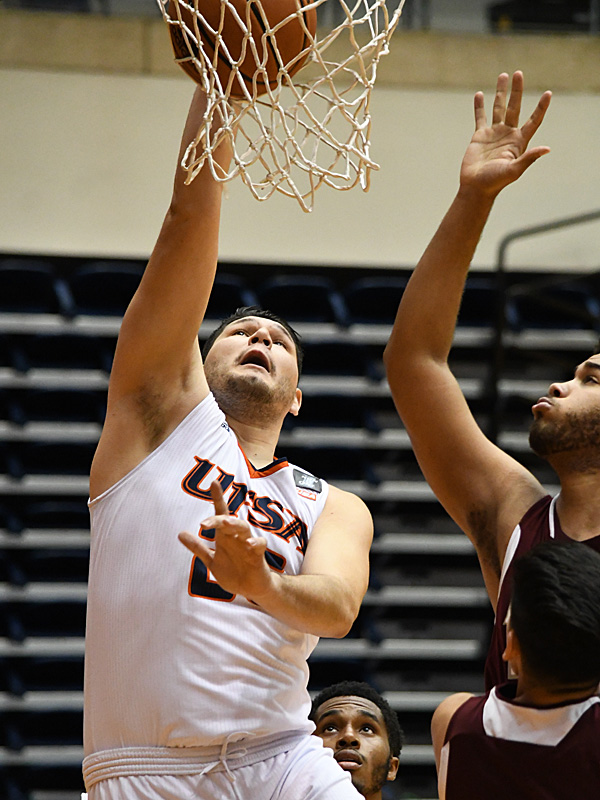 Adrian Rodriguez returned for the Roadrunners and contributed 12 points and seven rebounds.

Earlier this week, the UTSA Roadrunners made an 11th-hour scheduling adjustment, adding a home game against the Southwestern Adventist Knights.

The Roadrunners needed the contest to help them tune up for next week’s Conference USA men’s basketball tournament.

The Roadrunners got what they needed out of the extra game Thursday night with an easy 123-43 victory over the Knights, a school affiliated with the National Christian Collegiate Athletic Association. 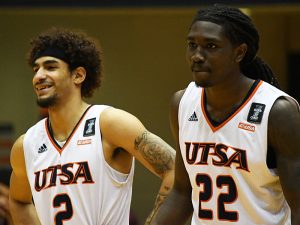 It was also a night for players who have not seen much floor time lately.

In addition, freshman Lachlan Bofinger scored a career-high in points with 14 and notched his first double-double with 14 rebounds. Jordan Ivy-Curry scored 11 on 5-for-5 shooting.

As a team, the Roadrunners connected on a season-high 64.8 percent from the field. They passed for 30 assists and committed only eight turnovers. On the defensive end, they held the Knights to 27.1 percent, including 21.9 percent in the second half. 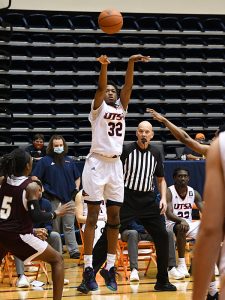 UTSA’s 80-point margin of victory was the largest in school history. The Roadrunners have won nine of 11 going into the tournament. Jackson is the leading active career scorer in NCAA Division I going into conference tournaments. With his performance against the Knights, he increased his points total to 2,528 and moved up to No. 60 on the all-time list, according to sports-reference.com. Wallace hiked his career total to 2,030 points. Jackson and Wallace are the first two players in 40 years of UTSA basketball to hit the 2,000-point plateau.

Rodriguez said the team feels good about itself, noting, “We’re incredibly excited. You know, just use this game to get the feel of having a game.” As for his own health, he told the team’s radio broadcast, “I felt great. (Trainer) Josh (Modica) does a great job. He helps me out. Coach is very understanding. My well being was on the top of their mind. I really appreciate everything that they’ve done. We did all the right steps.” Rodriguez’s health will be a key as UTSA will need to win four games in four days to win the tournament. UTSA coach Steve Henson said he was happy to see everyone on the bench get to play, including walk-ons Isaiah Addo-Ankrah, Artan Jabbar and Jaja Sanni. 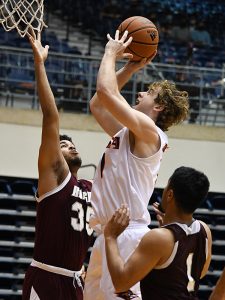 Lachlan Bofinger notched a double double with 14 points and 14 rebounds off the bench. — Photo by Joe Alexander

On Bofinger, Henson said, “He’s so active. He plays so hard. You know, people coming up to me a lot and ask about him. We have not lost confidence in him. We just play him at a position we’ve got some depth. Cedrick (Alley, Jr.) is playing great. But we love what (Bofinger) does. He’s going to have a great career for us.” Henson said he wanted to give Rodriguez a good test against the Knights. “He felt good. Felt really good. Played without his brace. He’d been wearing the brace in practice the last few days, so I was glad to see him play without that. We’ll handle the next few days the right way, hopefully, and get him ready to play next week.”

With the offense humming, the Roadrunners shot 65.9 percent from the field and surged to a 67-23 lead on the Knights.
The Knights, in turn, were held to nine field goals and 33.7 percent by the Roadrunners.
Southwestern Adventist was in the game only for a few minutes, hitting two straight field goals to pull within 10-5. From there, UTSA started to roll. The Roadrunners scored 16 points in a row and never looked back.
Both Jackson and Wallace were sharp, hitting for 19 points apiece in the half for UTSA. Jackson made his first six shot attempts and finished the half at 7 of 9, including 5 of 6 from three. Wallace hit 3 of 6 from long distance during a half in which he knocked down 7 of 11 overall. For the Knights, guard Justin Lamb had eight points.